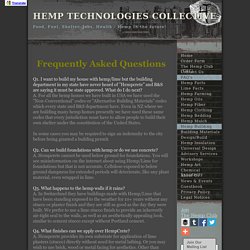 I want to build my house with hemp/lime but the building department in my state have never heard of ”Hempcrete” and B&S are saying it must be state approved. What do I do next? A. For all the hemp homes we have built in USA we have used the "Non-Conventional" codes or "Alternative Building Materials" codes which every state and B&S department have. Q3. Q6. Q9. Casting into single-sided temporary shutters, a 3-4 man crew can cast an average 200 cubic feet per day (1 less man). Growing our way out of climate change by building with hemp and wood fibre. How can buildings help with climate change? 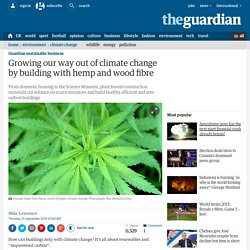 It’s all about renewables and “sequestered carbon”. The Department for Business, Innovation and Skills’ 2010 report on Low Carbon Construction concluded that construction was responsible for around 300m tonnes of carbon dioxide emissions, which is almost 47% of the UK’s total. Of this, around 50m tonnes is embedded in the fabric of buildings. Making one tonne of steel emits 1.46 tonnes of CO2 and 198kg of CO2 is emitted make one tonne of reinforced concrete. One square metre of timber framed, hemp-lime wall (weighing 120kg), after allowing for the energy cost of transporting and assembling the materials actually stores 35.5kg of CO2. If we can convert plants into building materials, we are in a win-win situation. The plant acts as a carbon store, sequestering (absorbing) atmospheric CO2 for as long as the plant continues to exist. This is because they are “vapour active”. 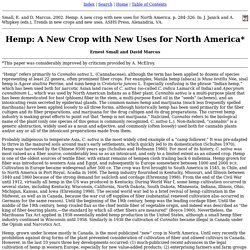 Industrial Hemp. Colorado. Hemp FarmingColorado, USA November, 2012: the Governor made owning small amounts of marijuana in Colorado legal when he signed Amendment 64 into the state Constitution. 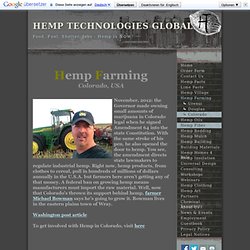 With the same stroke of his pen, he also opened the door to hemp. 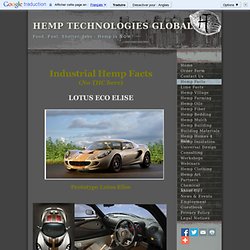 WOW! Hemp is the miracle plant of our time, breathing in 4x the carbon dioxide (CO2) of trees during it's quick 12-14 week growing cycle. Trees take 20 years to mature vs 4 months for Industrial Hemp! 1807: Napoleon signs Treaty with Russia to cut off all legal Russian Hemp trade with Britain. but the Czar refuses to enforce the treaty and turns a blind eye to Britain’s illegal Hemp trade.

June 24th, 1812 Napoleon invades Russia to try and put an end to Britain’s main supply of Russian Hemp but by the end of the year the Russian winter had decimated most of Napoleon’s forces. . * Hemp sails & rope carried Columbus to the Americas in 1492. The 1937 Marihuana Tax Act of 1937 placed a tax on the sale of Cannabis. Growing Jobs in Colorado /  Agricultural Hemp Initiative.

Hemp in the news 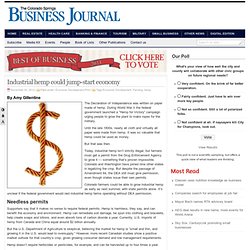 During World War II the federal government launched a “Hemp for Victory” campaign urging people to grow the plant to make ropes for the military. Until the late 1800s, nearly all cloth and virtually all paper were made from hemp. It was so valuable that hemp could be used as money. But that was then. Today, industrial hemp isn’t strictly illegal, but farmers must get a permit from the Drug Enforcement Agency to grow it — something that’s proven impossible.

Colorado farmers could be able to grow industrial hemp as early as next summer, with state permits alone. Needless permits Supporters say that it makes no sense to require federal permits. But the U.S. Hemp doesn’t require herbicides or pesticides, for example, and can be harvested up to four times a year. Hemp: The Trillion Dollar Crop. Hemp-1. Industrial Hemp Profile. By Ray Hansen, content specialist, AgMRC, Iowa State University, hansenr@iastate.edu. 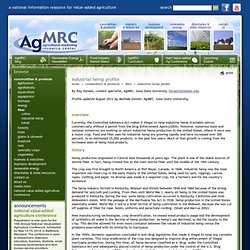 Profile updated August 2012 by Malinda Geisler, AgMRC, Iowa State University. Overview Currently, the Controlled Substance Act makes it illegal to raise industrial hemp (Cannabis sativa) commercially without a permit from the Drug Enforcement Agency(DEA). However, numerous state and national initiatives are working to return industrial hemp production to the United States, where it once was a major crop. Food and fiber uses for industrial hemp are growing rapidly and have increased over 300 percent, to an estimated 25,000 products, in the past few years. History Hemp production originated in Central Asia thousands of years ago. The crop was first brought to North America at Port Royal, Canada, in 1606. The hemp industry thrived in Kentucky, Missouri and Illinois between 1840 and 1860 because of the strong demand for sailcloth and cording. 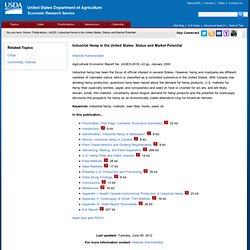