Molecular Biologist Explains How Cannabis Kills Cancer Cells. This Is How Cannabis Affects Your Body – Depending On How It’s Ingested [Infographic] Credit: Huffington Post By Amanda Froelich | True Activist Have you heard? 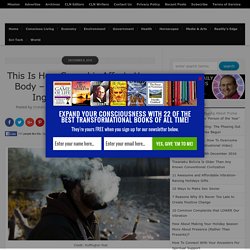 The U.S. Cancer Institute now lists cannabidiol (CBD) oil as a potential cure for cancer. Protective and therapeutic effects of cannabis plant extract on liver cancer induced by dimethylnitrosamine in mice. Abstract Hepatocellular carcinomas will emerge as a major form of malignancy in the coming decades. When these tumors are in advanced stages, few therapeutic options are available. (Marijuana/Hash) Endocannabinoids and liver disease - review. Woman Claims Her Lung Cancer Was Cured By Cannabis Oil. Many stories of cannabis oil curing cancer have arisen, but are they valid? 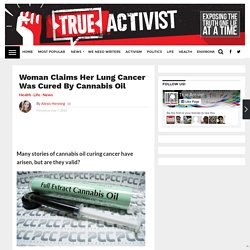 There have been many stories unfolding about people who have cured themselves of terminal cancers by using pure cannabis oil rather than going through chemotherapy. For instance, Michelle Aldrich was diagnosed with terminal lung cancer in January of 2012. Lung cancer is the leading cause of cancer-related mortality in the US. In 2015, there were 221,200 new cases of lung cancer diagnosed – of those, 158,040 have died. Aldrich was classified with stage three cancer, and rather than forgo chemotherapy, chose to use highly concentrated cannabis oil to help her cancer instead. National Cancer Institute Confirms Cannabis Can Cure Cancer. By Paul Fassa, contributor for RealFarmacy.com Apparently the left hand of this government doesn’t know what the right hand is doing, or more likely doesn’t want to know. 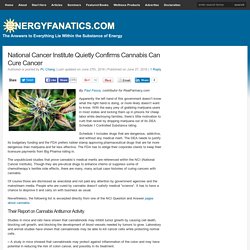 With the easy prey of grabbing marijuana users in most states and locking them up in prisons for cheap labor while destroying families, there’s little motivation to curb that racket by dropping marijuana out of its DEA Schedule 1 Controlled Substance rating. Schedule 1 includes drugs that are dangerous, addictive, and without any medical merit. The DEA needs to justify its budgetary funding and the FDA prefers rubber stamp approving pharmaceutical drugs that are far more dangerous than marijuana and far less effective. Fresh Food & Health Alternatives with CBD Oil - We Are a Village... Building a Community! Is Your Chocolate Contaminated With Toxic Metals? By As You Sow — Responding to published research showing high levels of heavy metals in commonly eaten food items, As You Sow began extensive independent laboratory testing of 42 chocolate products for lead and cadmium. 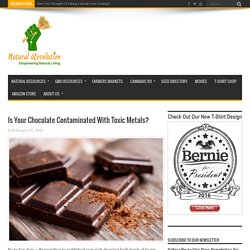 We found that 26 of the chocolate products (~62%) contain lead and/or cadmium at levels in which one serving exceeds the California safe harbor level for reproductive harm. We filed notices with 16 manufacturers, including See’s, Mars, Hershey, Lindt, Godiva, Whole Foods, and others, for failing to provide required warnings to consumers that their chocolate products contain lead, cadmium, or both.

Quality and Safety of CannaVest Corp.’s Products Proved by Independent Testing. CannaVest Corp. initiated its cooperative efforts with Project CBD in response to a special report on the hemp oil industry published by Project CBD titled "Hemp Oil Hustlers" on October 14, 2014 and revised on November 5, 2014. 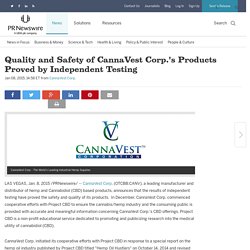 Project CBD reported that a consumer product, which is labeled as containing hemp oil and which was produced by the company and then sold in 2013 to a distributor, tested positive for hexane and other solvent residues. Following the publication of the Project CBD report, CannaVest agreed to work with Project CBD to independently test its products. Based on the results of this testing, Project CBD has concluded that CannaVest Corp.'s products are not contaminated with heavy metals or industrial solvent residues in amounts that pose health and safety issues for consumers, according to officially recognized safety standards.

Heavy Metals and Cannabis: What You Don’t See Can Hurt You ~ United Patients Group. Many cannabis users think of it as a very safe medicine—the side effects are few, the risks are low, and it comes straight from a plant. 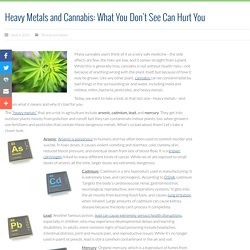 While this is generally true, cannabis is not without health risks—not because of anything wrong with the plant itself, but because of how it may be grown. Like any other plant, cannabis can be contaminated by bad things in the surrounding air and water, including mold and mildew, mites, bacteria, pesticides, and heavy metals. Today, we want to take a look at that last one—heavy metals—and explain what it means and why it’s bad for you. The “heavy metals” that are a risk in agriculture include arsenic, cadmium, lead, and mercury. They get into outdoor plants mostly from pollution and runoff, but they can contaminate indoor plants, too, when growers use fertilizers and pesticides that contain these dangerous metals.

Marijuana Toxicity. I am a great proponent of medical marijuana as well as using it simply for relaxation, recreation, and de-stressing. 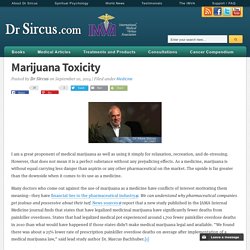 However, that does not mean it is a perfect substance without any prejudicing effects. As a medicine, marijuana is without equal carrying less danger than aspirin or any other pharmaceutical on the market. The upside is far greater than the downside when it comes to its use as a medicine. Drsircus. CBDOIL. By Dr. 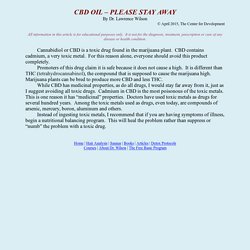 Lawrence Wilson © April 2015, The Center for Development All information in this article is for educational purposes only. A Basketball-Sized Mass Of Lymphoblasts Was In Her Chest & Her Parents Said No To Full Body Radiation. It wasn’t long ago that a group of federal researchers commissioned by the United States government discovered that the two most common cannabinoids in marijuana, tetrahydrocannabinol (THC) and cannabidiol (CBD), weaken the ferocity of cancer cells and render them more susceptible to radiation treatment. 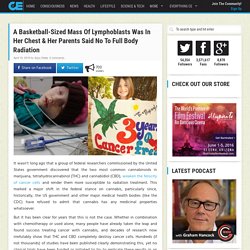 This marked a major shift in the federal stance on cannabis, particularly since, historically, the US government and other major medical health bodies (like the CDC) have refused to admit that cannabis has any medicinal properties whatsoever. But it has been clear for years that this is not the case. Whether in combination with chemotherapy or used alone, many people have already taken the leap and found success treating cancer with cannabis, and decades of research now irrefutably show that THC and CBD completely destroy cancer cells. Healthy News and Information. By PAUL FASSA This is a tribute to Rick Simpson, without whom cannabis oil for healing would probably not be used successfully by so many today. 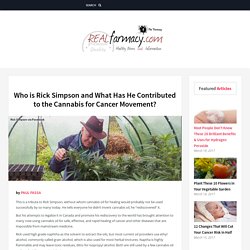 He tells everyone he didn’t invent cannabis oil, he “rediscovered” it. But his attempts to legalize it in Canada and promote his rediscovery to the world has brought attention to many now using cannabis oil for safe, effective, and rapid healing of cancer and other diseases that are impossible from mainstream medicine. Rick used high grade naphtha as the solvent to extract the oils, but most current oil providers use ethyl alcohol, commonly called grain alcohol, which is also used for most herbal tinctures.

Canadian Mom Credits Cannabis Oil for Surviving Cancer AFTER Doctors Told Her She’d Be Dead Within Months. By Phillip Schneider | Waking Times Doctors told her to prepare to die, but she took cannabis oil instead. It was 2009 when Canadian Cheryl Pearson was misdiagnosed by the Canadian medical system with multiple sclerosis (MS), and for the following four years, she believed MS was the reason behind her rapidly declining health and the loss of use of some bodily functions. Her doctors were dead wrong as it turned out, and in 2013, she was told she didn’t have MS at all, but, unfortunately something much worse.

She was dying from stage 4 Ovarian cancer. Told she would survive until December of 2013, her “end of life date,” she resigned herself to conventional cancer treatments as her only hope. This Is The Cannabis Oil Recipe Rick Simpson Used To Heal His Cancer And Recommends To Others. By Amanda Froelich Someday, everyone will know the name ‘Rick Simpson’. Why? HEALTH FREEDOM ALERT: The FDA just outlawed CBDs and hemp oil extracts by claiming all plant molecules now belong exclusively to Big Pharma. (NaturalNews) Hemp oil extracts containing CBDs (cannibidiols) are such a threat to the pharmaceutical industry that the FDA is now invoking totally insane justifications for outlawing them. CBDs are non-psychoactive compounds found naturally in hemp plants.

They work so well as powerful natural medicine that people everywhere are realizing CBDs work better than pharmaceuticals for treating epilepsy, seizures, neurological disorders and other serious health conditions (including HIV infections). Scientific Studies Show That Hemp Oil Cures Cancer. (TABUBlog.com) Click on link for much more information about the healing powers of hemp oil. Full Comprhensive Report: Cure Cancer With Hemp Oil The Top 42 Medical Studies That Prove Cannabis Can Cure Cancer The negative stigma attached to marijuana is due to its supposed psychotropic effects, yet again, there is no such scientific evidence.

Cannabis Oil Cures 3 Year Old Boy Of Cancer After Doctors Gave Him 48 Hours To Live. Cannabis and Cannabinoids. Cannabis Cures Cancer and the Government Knows It.