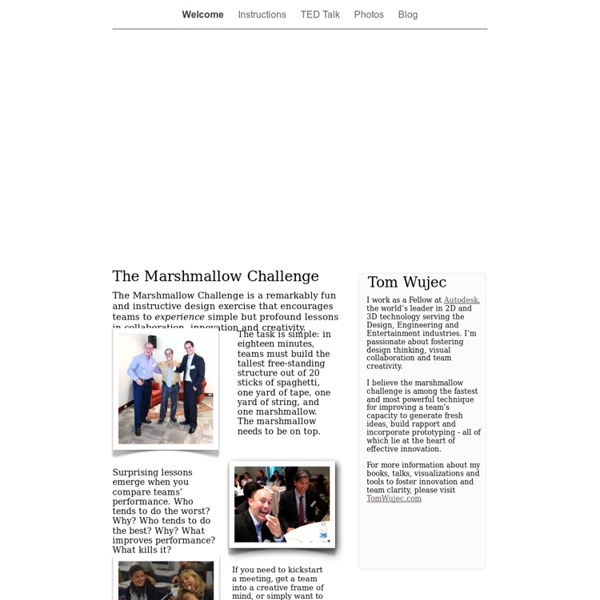 Make: DIY Projects, How-Tos, Electronics, Crafts and Ideas for Makers When I saw one of these “thumb ring book holders” (aka a “book ring”) in my online travels, I knew this was something I wanted to make and try out. I have arthritis in my hands and arms so holding books and tablets in bed is always a struggle. For a while, I had one of those clips that goes across the tops of the pages and includes a book light. That worked, but I read fairly fast, so moving it from page to page was a bother. Making a book ring couldn’t be easier. Solar Cockroach Vibrobot What you need. Soldering Iron + solder Hot glue gun (A helping hand is nice as well) Wire cutters or strong scissors 1.5V solar panel ($1) Small DC Vibrating Motor (AKA Pager motor) Two paper clips Scrap wire (I used the ends from a couple of resistors I had cut down.

Innovation Leadership Lessons from the Marshmallow Challenge Scott D. Anthony Imagine a room filled with 30 people, divided into six teams. Each team gets 20 sticks of spaghetti, a yard of string, strips of scotch tape, and a single marshmallow. They have 18 minutes to build a free-standing structure that will enable the marshmallow to rest on top. This is the so-called marshmallow challenge, a staple of many design schools.

How to build a People Counter with Raspberry Pi and Ubidots August 21, 2015 AT 3:00 am People counter project from UbiMaker on Instructables. In this simple project we’ll use a motion sensor to detect if an object is passing in front of our Raspberry Pi. Then we’ll count how many times that happens, and send this value to Ubidots.People counters are typically expensive devices used in the retail industry to understand how shoppers behave. Solar Altoids iPhone/ iPod Charger I love my iPhone 4 to death. I really do. Even if it sucks juice faster than a 1st grader at snack time and I often find myself on low power with a long train ride ahead of me. I originally made my Altoids USB Charger to use with my iPhone, only to find that Apple being Apple doesn't let it's products play nice with generic USB chargers. I then set out on a long journey to find a cheap charger that would work with an iPhone 4.

6 Photographers Asked to Shoot Portraits of 1 Man... With a Twist Canon recently conducted an interesting experiment on the power of perspective in portrait photography. They enlisted the help of 6 photographers and asked them each to independently shoot portraits of a man named Michael. But there was a twist: each photographer was told a different thing about Michael’s background. The photographers were told that Michael was: a self-made millionaire, someone who has saved a life, an ex-inmate, a commercial fisherman, a self-proclaimed psychic, and a recovering alcoholic.

Why Smart People Struggle with Strategy - Roger Martin by Roger Martin | 2:00 PM June 12, 2014 Strategy is often seen as something really smart people do — those head-of-the-class folks with top-notch academic credentials. But just because these are the folks attracted to strategy doesn’t mean they will naturally excel at it. The problem with smart people is that they are used to seeking and finding the right answer; unfortunately, in strategy there is no single right answer to find.

Make: DIY Projects, How-Tos, Electronics, Crafts and Ideas for Makers Years ago, Becky Stern did a post about the wonders of “super paramagnetic silicone putty.” It was a commercial product and I assumed it was beyond the ability of the average nerd to make at home. Wrong. It couldn’t be easier. This Instructable shows how magnetic putty is nothing more than regular Silly Putty/Thinking Putty mixed with black iron oxide powder.