Worker-owned co-ops are coming for the digital gig economy. The Woman Aiming to Get 50 Million Americans Into the Worker-Owner Economy by Fran Korten. For decades Marjorie Kelly has looked for ways that businesses can better contribute to the good of society. 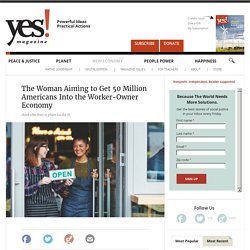 In 1987, after getting a master’s degree in journalism, she founded Business Ethics magazine to showcase socially responsible corporations. But after 20 years as president and publisher, she sold the magazine. She had come to an epiphany: Encouraging individual corporations to behave better was an insufficient route to improving society. Significant change would require a shift in the ownership structure of business. Kelly’s 2012 book, Owning Our Future, lays out ways to expand democratized ownership models, including employee ownership.

Research shows that when employees own the company, they make higher wages. Through the Fifty By Fifty Network, which Kelly co-founded with Jessica Rose, she is now putting those ideas into action. Fran Korten caught Kelly at her home in Salem, Massachusetts, to learn more about the network, and its ambitious plans. So we think our goal is doable. These Neighbors Got Together to Buy Vacant Buildings. Now They’re Renting to Bakers and Brewers by Olivia LaVecchia. This article was produced by the Institute for Local Self-Reliance, as part of its Community-Scaled Economy Initiative, which produces research and partners with a range of allies to implement public policies that curb economic consolidation and strengthen locally owned enterprise. 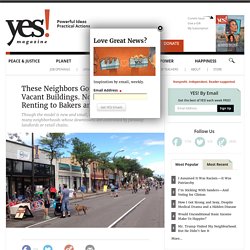 The intersection of Central and Lowry Avenues in northeast Minneapolis is bustling. This Way Out is...Out! Zingerman's: This is Ownership. Documentary films tell the story of the new economy. Worker Cooperatives Can Revitalize Our Economy. From Sustainable Tompkins by Joe Marraffino and Gay Nicholson Leaders in the sustainability movement believe that the most promising economic development strategy available may be a focus on economic justice. 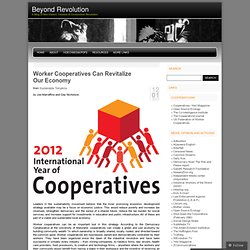 This would reduce poverty and increase tax revenues, strengthen democracy and the sense of a shared future, reduce the tax burden for social services, and increase support for investments in education and public infrastructure. All of these are part of a viable and sustainable local economy. Worker cooperatives can be an important tool in this strategy. While worker cooperatives have been a steady presence in modern history, they have surged during times of economic dislocation, and rapid cultural and technological change. The wave was given technical assistance by the NYS School of Industrial and Labor Relations and supported by government loans.

The Finger Lakes and Southern Tier regions need a program to mobilize the creation of regional worker cooperatives. Welcome to the Northwest Cooperative Development Center on the web! Video abstract – Janelle Cornwell talks about ‘Worker Co-operatives and Spaces of Possibility’ Hot on the heels of Staff Reporter Jesse Goldstein’s two-part essay on the OWS Screenprinters Coop and Guild which explores questions of markets, commons, and alternative ways of organising economic activity (see here and here), we have here Janelle Cornwell from the University of Massachusetts, Amherst talking about her new paper ‘Worker Co-operatives and Spaces of Possibility‘. 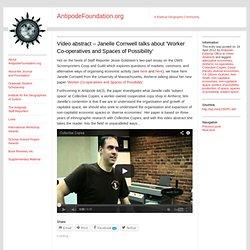 Forthcoming in Antipode 44(3), the paper investigates what Janelle calls ‘subject space’ at Collective Copies, a worker-owned cooperative copy shop in Amherst, MA. Janelle’s contention is that if we are to understand the organisation and growth of capitalist space, we should also seek to understand the organisation and expansion of non-capitalist economic spaces or ‘diverse economies’. 10 Reasons Co-ops Rock Poster - The Toolbox for Education and Social Action. The potential of the co-operative business model. We’d like to thank Kate Whittle from Cooperantics for this guest post responding to my TEDx talk (The unstoppable rise of the collaborative economy) and exploring further one of the key facets, which is the potential of the co-operative business model. 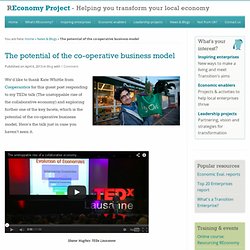 Here’s the talk just in case you haven’t seen it. Shane Hughes TEDx Lausanne. Why You Should Give (Part Of) Your Company To Your Employees. Todd Defren and Jim Joyal had built a company together. 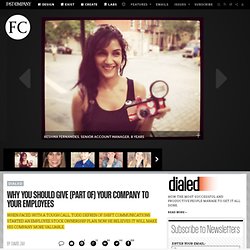 Shift Communications had grown from a small PR startup to a company of 110 employees, with offices in Boston, New York, and San Francisco. They’d won a suite of awards, were doing strong revenue, and were beginning to receive overtures from larger companies about a possible acquisition. The only problem was that Defren and Joyal had “asymmetrical motivations,” as Defren puts it. Joyal was over a decade older and ready to start thinking about estate planning. Defren felt he had years of work ahead of him. There were a few mechanisms by which Defren could buy Joyal out. The PR world, says Defren, is made up of a few Goliaths, plus a few hundred little agencies around them. 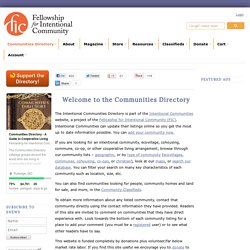 Intentional Communities can update their listings online so you get the most up to date information possible. You can add your community now. If you are looking for an intentional community, ecovillage, cohousing, commune, co-op, or other cooperative living arrangement, browse through our community lists – geographic, or by type of community (ecovillages, communes, cohousing, co-ops, or christian), look at our maps, or search our database. Directory of Members.