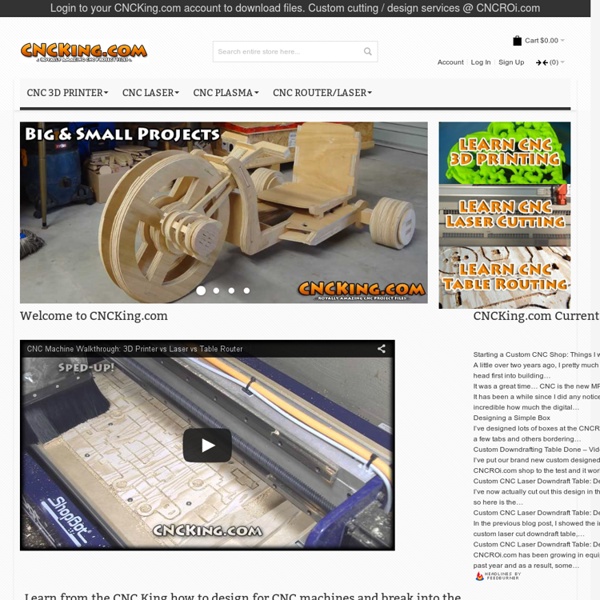 Downloads The packages are automatically built based on the master branch on github. Note: The packages are called "openscad-nightly" so it's possible to install the development snapshot packages in parallel to the release version from the official repositories. Debian / Ubuntu packages built on OpenSUSE build service To install the packages, the release key must be added with apt-key to the key-ring to allow apt-get / aptitude to validate the packages. NOTE: If you get errors about an expired key valid till 2016-11-28, please re-import via the following command. # wget -qO - | sudo apt-key add - After the key is added, the repository URL needs to be configured. Debian 8 (Jessie) deb Ubuntu 14.04 LTS deb Ubuntu 16.04 deb Ubuntu 16.10 Ubuntu 17.04

Maker Movement Gaining Recognition There have been a number of stories in mainstream media recently recognizing the “Maker movement” exemplified by our own magazines Make: and Craft: and online sites like Etsy and Instructables. (Disclosure: O’Reilly AlphaTech Ventures is an investor in Instructables.) This past week’s article in Business Week, Arts and Crafts Find New Life Online is a great example. (There was also a great article in the NY Times a few weeks ago, entitled Handymade 2.0.) The Business Week article cites Etsy, Instructables, and Make, as well as fashion design sharing sites BurdaStyle and StyleShake. I particularly liked that the article singled out the ties of the new movement to open source software: Many of these companies say they trace their lineage to the open-source technology movement formed in the ’90s by computer programmers who wanted to create software anyone could build upon. One of the things that the article didn’t pick up on, though, was the crossover between technology and craft.

Make a Maker Faire Mini Maker Faires are independently produced celebrations of local maker culture. Our Mini Maker Faire program provides tools and resources to help others to make a Maker Faire event that reflects the creativity, spirit and ingenuity of their community. The first Maker Faire started in 2006 in San Mateo, California, organized by the editors of MAKE magazine. Our Bay Area event just completed its ninth year, and has grown into a weekend-long celebration featuring 900+ Makers and attracting over 120,000 visitors. Our other flagship event takes place in New York City, this year with 600+ Makers, and 75,000 attendees. Other larger-scale “featured” Maker Faires take place in Detroit, Kansas City, Tokyo, Oslo, Rome and Newcastle. However, the idea of Maker Faire can work at almost any scale. In its simplest form, Maker Faire creates opportunities for conversations with Makers. It is a special experience, but the fundamental design of the event is one that can be reproduced almost anywhere.

Poser 7 Demo İndir | Maxi3D.NET Geliştirici: Smith Micro Software Tür: 3D Canlı (Organik) ve İnsan Modelleme, 2D Pixel, 3D Animasyon, 3D Rendering, Platform (OS) : Windows, Macintosh Lisans: Demo Download: Poser 7 Demo Windows İçin – English (178.1 MB .zip) Alternatif indirme bağlantısı: Poser 7 trial download En ünlü karakter modelleme programı olan poser’in en son versiyonu.Organik modellemede büyük işler başaran bu programın demo versiyonunu indirip deneyebilirsiniz.İçindeki hazır insan model ve figürleriyle rahatça modellemeler yapabilirsiniz… Aşağıdaki modeller Poserle oluşturulmuştur… Anil Dash The Maker Movement's Precarious Place in Society and Education At its heart, Maker Faire is a show for kids. Adults go to Maker Faire to meet potential business partners, talk shop with fellow creators, or catch up on the latest in do-it-yourself technology. But for kids it's a wonderland--a place where they can see a real life-size Wall-E or Dalek or dancing robot. And for a surprising number of budding geniuses, it's a place where they can fully celebrate their geeky interests as the norm, not the exception. At World Maker Faire in New York, I saw kids proudly showing off the robots they designed for the FIRST robotics competition. Maker Faire is also a show about kids: What we're teaching them, how we're teaching them, and why the Maker movement is encouraging them to be creative. One of the speakers I saw at World Maker Faire wasn't so optimistic--or, at least, he didn't believe the creativity Torrone alluded to extends beyond the maker movement. From the Kit to the Classroom Are kits really so bad? A Brighter Picture of Industrialism

Software - Products 3DCrafter™ 3DCrafter is a real-time 3D modeling and animation tool that incorporates an intuitive drag-and-drop approach to 3D modeling. Complex models can be constructed from simple 3D primitives, or created using 3DCrafter's Shape Building Tools. Modeling tools are provided to deform, sculpt, and paint 3D shapes. Creating an animated scene is as simple as positioning the shapes within your scene for each point in time in your animation. 3DCrafter will ensure that the resulting animation runs smoothly. Tool roll-up groups allow you to customize the 3DCrafter interface so that only those items you use most frequently are visible. The standard version of 3DCrafter is a fully functional product provided as freeware. Feature Comparison 3DCrafter 9 is a free upgrade for anyone who purchased July 1st, 2010 or later. Multi-User licenses for 3DCrafter Pro can be purchased here. Entering License Codes Once you have purchased 3DCrafter Plus or 3DCrafter Pro you will receive a License Code via Email.

Recognizing The Maker Movement The World Maker Faire opens in Queens this weekend, in the second annual New York City event for the formidable faire. That was perfect timing for having a conversation with Dale Dougherty, the father of the movement, about why Making is bigger than just tinkering or crafting, but actually represents an important social, cultural and political force. If you have twenty minutes, I'd love for you to watch the video below and to share your thoughts on the implications of the Maker Movement. It was an incredible privilege to get to talk at length with the person most responsible for making it happen, and my greatest hope is that we can kick off a conversation around this weekend's Faire that helps many people realize just how significant and important this fun, engaging and welcoming event can be. Related Links

14 'makers' who are changing the DIY world Inventors and tinkerers have always been around, but until recently most “makers” toiled away in secluded basements and garages, fashioning their creations from homemade materials. All that’s changed now. With new desktop design and manufacturing tools, affordable and accessible building materials, and the power of the Internet to rally funders and get the word out, even the Girl Scout down the street and the retired hobbyist across town can now launch a company and sell products that were once the strict domain of corporate titans and old-school factories. The maker movement may well be the next industrial revolution. 1. Known for her pink hair and lip ring, Limor Fried, an MIT engineer and lifelong electronics tinkerer, founded Adafruit in 2005 to help other inventors track down parts for their DIY projects. 2. This trailblazing champion of makers, innovators and DIYers everywhere launched Make Magazine in 2005, followed by Maker Faires the next year. 3. 4. 5. 6. 7. 8. 9. 10. 11. 12.