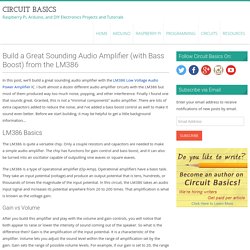 I built almost a dozen different audio amplifier circuits with the LM386 but most of them produced way too much noise, popping, and other interference. Finally I found one that sounds great. Granted, this is not a “minimal components” audio amplifier. There are lots of extra capacitors added to reduce the noise, and I’ve added a bass boost control as well to make it sound even better. Before we start building, it may be helpful to get a little background information… LM386 Basics The LM386 is quite a versatile chip. The LM386 is a type of operational amplifier (Op-Amp). Gain vs Volume After you build this amplifier and play with the volume and gain controls, you will notice that both appear to raise or lower the intensity of sound coming out of the speaker. The LM386 IC has 8 pins as shown in the diagram below: LM386N-1: 0.325 WattsLM386N-3: 0.700 WattsLM386N-4: 1.00 Watts. Project: Headphone volume control - Laboratory BLaboratory B. I recently moved to a new cell phone, a Motorola Triumph. 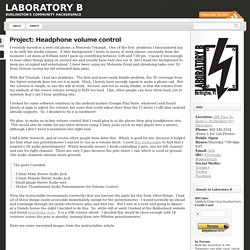 One of the first problems I encountered has to do with the media volume. A little background: I listen to music at work almost constantly from the moment I sit down at 8:00am until I pack up everything between 5:00 and 7:00 pm. I keep it low enough to hear other things going on around me and usually have only one ear in, but I need the background to keep me occupied and entertained. I have been using my Motorola Droid and streaming radio over 3G from Verizon (using my old unlimited data plan). With the Triumph, I had two problems. I looked for some software solutions in the android market (Google Play Store, whatever) and found plenty of apps to adjust the volume, but none that could adjust finer than the 15 levels (+off) that android already supports.

Build a Great Sounding Audio Amplifier (with Bass Boost) from the LM386. Add Volume, Jack. Many cheap, fun sonic and musical toys have built-in speakers and no output jack. 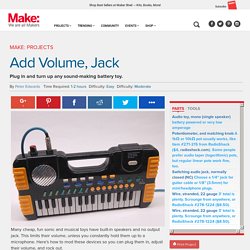 This limits their volume, unless you constantly hold them up to a microphone. Here’s how to mod these devices so you can plug them in, adjust their volume, and rock out. The simplest way to install an output jack is to remove the speaker and solder the jack in its place. But every time I do this I regret it, because then the toy no longer works by itself.

Inevitably, there will be a time you want to play and there’s no amp around. You can also leave the speaker connected in parallel with a regular audio jack, but then the speaker might act like a microphone and trigger feedback and unwanted noise when you’re plugged in. My favorite solution is to use a switching jack, which automatically disconnects the speaker when you plug in a cord. Check out more Weekend Projects. Universal Earbud/Headphone Volume Control. So I bought a PMP (Portable Media Player) from Hong Kong so i could play my NES games with the on-board emulator wherever was convenient. 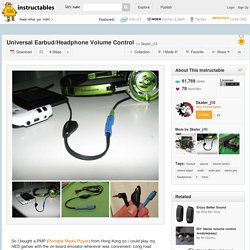 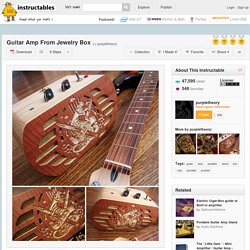 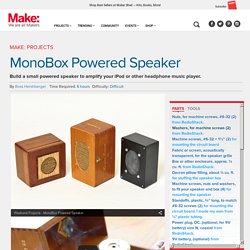 MonoBox is a small, inexpensive powered speaker that amplifies the output of your headphone music player. It’s little but it’s loud! All the circuit parts are available from RadioShack. The speaker and cabinet are left to your preference. You’ll learn how to assemble and solder an audio power amplifier using an integrated circuit (IC) chip, and how to choose a speaker and install it in a cabinet with the amplifier. The core of MonoBox is a compact and efficient audio amplifier based on the LM386 power amp chip. You’re probably thinking, “Sure, but it’s so small. PUNCH amplifier: 1W guitar amplifier. I've started this project as an alternative to the infamous ROG's Ruby amp. 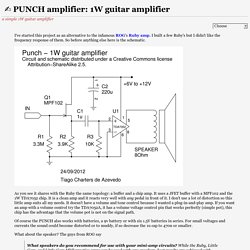 I built a few Ruby's but I didn't like the frequency response of them. So before anything else here is the schematic. As you see it shares with the Ruby the same topology: a buffer and a chip amp. It uses a JFET buffer with a MPF102 and the 1W TDA7052 chip. It is a clean amp and it reacts very well with any pedal in front of it.

Of course the PUNCH also works with batteries, a 9v battery or with six 1.5V batteries in series. What about the speaker? PUNCH amplifier: 1W guitar amplifier.