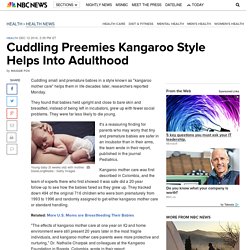 They found that babies held upright and close to bare skin and breastfed, instead of being left in incubators, grew up with fewer social problems. They were far less likely to die young. It's a reassuring finding for parents who may worry that tiny and premature babies are safer in an incubator than in their arms, the team wrote in their report, published in the journal Pediatrics. 7 Ways to Decrease Perinatal Depression. The Incredible Healing Effect of Mother's Touch. Post-birth skin-to-skin contact reduces up to 36% infant deaths. A new research from the Harvard T.H. 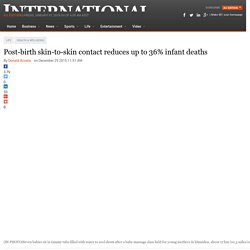 Chan School of Public Health and Boston Children’s Hospital says that skin-to-skin contact may reduce deaths for infants with low birth weight. Low birth weight infants are particularly vulnerable during their first month of life so the researchers encourage skin-to-skin contact, also known as kangaroo mother care (KMC), especially in developing countries where conventional treatments are not widely available. Four million infants die during their first month of life worldwide each year, according to a Harvard T.H. Chan School of Public Health press release. Generally, health technologies like incubators improve outcomes for infants at a high risk, but such equipment is uncommon in low- and middle-income countries. 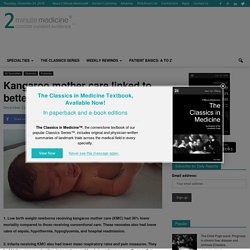 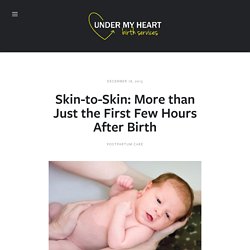 Stunning Image Shows the Science Behind the Mother-Child Bond. Study: 40 Percent Of Children Lacking Secure Attachments. A recent eye-opening study of 14,000 children in the United States found that as many as 40 percent of children don’t develop strong emotional bonds (what psychologists refer to as ‘secure attachment’) with their parents. 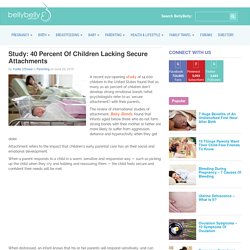 The review of international studies of attachment, Baby Bonds, found that infants aged below three who do not form strong bonds with their mother or father are more likely to suffer from aggression, defiance and hyperactivity when they get older. Skin-to-skin contact after birth reduces stress levels for mothers. Skin-to-skin contact after birth not only benefits newborns, but also mothers, new research shows. 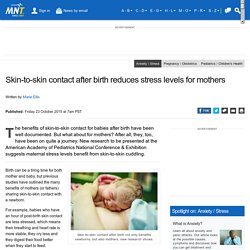 Birth can be a tiring time for both mother and baby, but previous studies have outlined the many benefits of mothers (or fathers) sharing skin-to-skin contact with a newborn. For example, babies who have an hour of post-birth skin contact are less stressed, which means their breathing and heart rate is more stable, they cry less and they digest their food better when they start to feed. Because a mother's chest area is warmer than other parts of her body, it prevents her new baby from cooling down, which is a significant health risk.

Additionally, being so close to the mother will help the baby pick up some of her skin's friendly bacteria, preventing infection. Furthermore, like any mammal, a new baby has the instinct to want to be in close contact with its mother or father. Investigators behind the latest research - led by neonatologist Dr. Study: 40 Percent Of Children Lacking Secure Attachments. How Delivery And Breastfeeding Impact Your Baby's Gut Bacteria And Future Health. Our digestive system is home to nearly 100 trillion bacteria, commonly referred to as our gut microbiome. 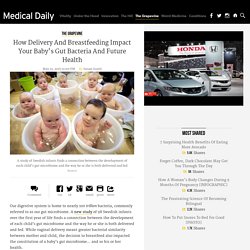 A new study of 98 Swedish infants over the first year of life finds a connection between the development of each child’s gut microbiome and the way he or she is both delivered and fed. While vaginal delivery meant greater bacterial similarity between mother and child, the decision to breastfeed also impacted the constitution of a baby’s gut microbiome... and so his or her health. Our gut bacteria make an invaluable contribution to our metabolism by helping us break down complex carbohydrates and starches. 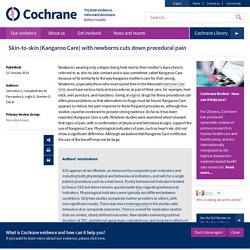 Fifteen studies (n = 744) used heel lance as the painful procedure, one study combined venepuncture and heel stick (n = 50), two used intramuscular injection, and one used 'vaccination' (n = 80). The studies that were included were generally strong and free from bias. Eleven studies (n = 1363) compared SSC alone to a no-treatment control. Although 11 studies measured heart rate during painful procedures, data from only four studies (n = 121) could be combined to give a mean difference (MD) of 0.35 beats per minute (95% CI -6.01 to 6.71).

Three other studies that were not included in meta-analyses also reported no difference in heart rate after the painful procedure. Eight studies compared SSC to another intervention with or without a no-treatment control. 030807-artikel-mc-huidcontact.pdf. Benefits of Babywearing vs. Carseat carrying. Benefits of Baby-Wearing vs. 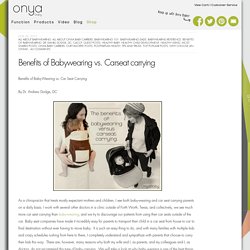 Car Seat Carrying By Dr. Andrew Dodge, DC As a chiropractor that treats mostly expectant mothers and children, I see both baby-wearing and car seat carrying parents on a daily basis. I work with several other doctors in a clinic outside of Forth Worth, Texas, and collectively, we see much more car seat carrying than baby-wearing, and we try to discourage our patients from using their car seats outside of the car. A newborn’s spine in proper c-shaped alignment Structurally, your newborn baby’s spine is a big c-shape. In contrast, when baby is laying flat on their back in a car seat for a prolonged amount of time, the gravitational effects on the spine begin to straighten the developing curves.

Neurologically, there has been shown to be accelerated brain maturation when infants are worn. The importance of immediate/early skin-to-skin after caesarean. “Immediate or early skin-to-skin contact after a Caesarean section may increase breastfeeding initiation, decrease time to the first breastfeed, reduce formula supplementation in hospital, increase bonding and maternal satisfaction, maintain the temperature of newborns and reduce newborn stress” (Stevens et al 2014). 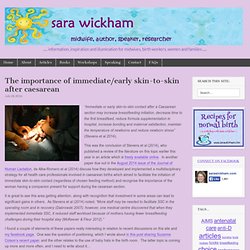 This was the conclusion of Stevens et al (2014), who published a review of the literature on this topic earlier this year in an article which is freely available online. De logica van het dragen. Het dragen van kinderen is eeuwenoud en wordt in alle werelddelen gedaan. Dat kon heel lang niet anders omdat we jagers en verzamelaars zijn geweest. Als vrouw kon je geen werk verzetten als je bij je baby moest blijven. En de baby alleen laten was ronduit gevaarlijk. Er liepen immers roofdieren rond. Take it Off: Why You Should Drop Your Newborn’s Hat. Photo Credit Little pink and blue striped stocking caps have become tradition for our babies. We assume they keep our babies warm, but have you ever questioned if they’re really effective (hint: they’re not)? In fact, those little caps could do more harm than good – here’s why. Baby Smell and Bonding Newborn babies have a wonderful, almost intoxicating smell. This smell isn’t just to make you sigh happily, however.

Ho c6 c7 120912 90m breastfeeding behavior frequency wna. ♥ Mothers’ Day Present ♥ « iLactation. Our gift to you for Mothers’ Day – our fantastic open access presentation by Jill Bergman talking about Early Bonding for Mothers and Babies. You’ll enjoy every minute. This presentation will be available until 11th June 2014. Early Bonding for Mothers and Babies by Jill Bergman Early bonding starts before birth, during labour and at the moment of birth. Why I'd Never Put My Baby In A Baby Bjorn Carrier - MegganMamma. The carriers that don’t support the back of the person carrying the baby are those where the straps are quite high on the back and where there’s not much support around the hips. One of the reasons I’ve loved the ergo carrier is because I’ve felt that my back has been supported by its wide, think hip band.

If your carrier doesn’t support your back properly you’re likely to end up with back pain, so you really need to get a carrier that checks all the ticks for you as well as for your baby. If you don’t wear your baby in a carrier where their knees are higher than their hips it can lead to hip problems in babies who are susceptible, ie. in babies who already have some form of instability or “clicky” hips.

Also, any hip problems caused by a baby carrier may only become noticeable once your child is walking. Correcting hip displacement could mean years of pain and struggle, so why take the chance – get a carrier that supports your child’s hips. Richtlijn borstvoeding. The Complete Guide To Baby Carrying. A hot mess. There's no better way to describe the current state of the baby carrying industry. New parents doing their own online research on carriers will find an overwhelming number of choices and some very heated discussions—but very little scientific or medical research.

As we said, a hot mess. So we decided to do our best to pull together all of the relevant facts, theories, and opinions in one place. Herewith, our complete guide to baby carrying. First things first. A sling is a simple, one-shouldered baby carrier that is essentially a loop of fabric folded lengthwise to form a pocket. Dr. Nils Bergman - Social & Emotional Intelligence of Infants. 10 Incredible Gifts for NICU Families. My twins, Micah and Zachary, were born three months prematurely.

They spent 91 terrifying days in the NICU, where they each nearly lost their lives. I am not exaggerating when I say that most of our 91 days in the NICU felt like hell. During this time, I did not reach out to my family and friends because I was too overwhelmed. I needed people to reach out to me and insist on providing their love and support. Fortunately, people did, and here are the amazing gifts they gave… Do you know a NICU family?