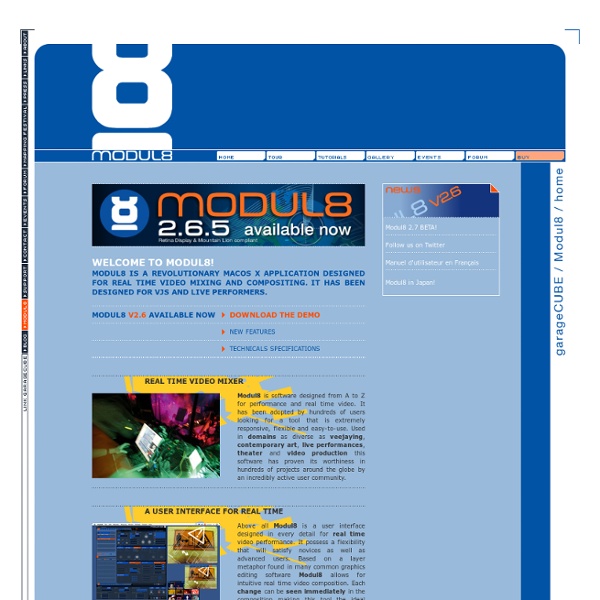 Millumin Graffiti Research Lab The United States of America is going out of business! But here at the U.S. Department of Homeland Graffiti, we want to turn this moment of national embarrassment and hard times into real savings for you and your family. From June 4th through the 28th, the U.S.D.H.G and the Graffiti Research Lab are liquidating all confiscated, high-tech graffiti artifacts and tools, expunged evidence, court exhibits, redacted documents and office furnishings, priced to sell. So grab a handful of Euros or Mao Bucks (U.S. currency still accepted while supplies last) and head on down to Gallery Anno Domini located between U.S. Artist’s Reception: First Friday, June 6th, 2008 8 p.m. ’til late • free and open to the public Exhibition runs from June 4th – June 28th Terrortites 2-layer U.S.D.H.G. Homeland Security Advisory Canvas U.S.D.H.G. More SALE items here on fuckflickr.

Theodore Watson - Interactive Installations - 2011 OF - Sounding Sounding Ornaments (1932) Between ornament and music persist direct connections, which means that Ornaments are Music. If you look at a strip of film from my experiments with synthetic sound, you will see along one edge a thin stripe of jagged ornamental patterns. These ornaments are drawn music -- they are sound: when run through a projector, these graphic sounds broadcast tones or a hitherto unheard of purity, and thus, quite obviously, fantastic possibilities open up for the composition of music in the future. Undoubtedly, the composer of tomorrow will no longer write mere notes, which the composer himself can never realize definitively, but which rather must languish, abandoned to various capricious reproducers. A number of experiments that I have just made confirm the unprecedented range and significance of this method. A combination of any chosen sound-images is readily imaginable. Oskar Fischinger Detail from display card by Fischinger, showing some of his "ornaments":

Max (Wikipedia) Max is a visual programming language for music and multimedia developed and maintained by San Francisco-based software company Cycling '74. During its 20-year history, it has been used by composers, performers, software designers, researchers, and artists for creating recordings, performances, and installations. The Max program itself is modular, with most routines existing in the form of shared libraries. An API allows third-party development of new routines (called "external objects"). As a result, Max has a large user base of programmers not affiliated with Cycling '74 who enhance the software with commercial and non-commercial extensions to the program. Because of its extensible design and graphical interface (which represents the program structure and the GUI as presented to the user simultaneously), Max has been described as the lingua franca for developing interactive music performance software.[1] Various synthesizers and instruments connected to Max.

This is your brain on TED MONTEREY, Calif.--If you sense numbers as colors, or see images when hearing a tone, you might be a poet and not know it. Atypical and subjective responses to colors, sounds, numbers and the like are caused by a neurological condition called synesthesia, a mutation in an area of the brain that can result in a cross-wiring of hearing, vision and touch senses. According to neurologist Vilayanur Ramachandran, synesthesia is eight times more common among creative people such as artists, musicians, writers and poets. "One theory (is that) they're just crazy," Ramachandran joked, while speaking here Saturday at the Technology, Entertainment and Design conference (TED), an exclusive confab that draws scientists, tech moguls, politicians and celebrities. "What's really going on (is that) concepts in different parts of the brain are cross-wired in some people, resulting in a greater sense of metaphorical thinking." "That argument never made sense to me," Ramachandran said.

CoGe Software Sharpness: What is it and how is it measured? Image sharpness Introduction – MTF – MTF equation – Vanishing resolution – Slanted-edge measurements -MTF measurement matrix – Spatial frequency units – Summary metrics - Results -Noise reduction – Diffraction & Optimum aperture – Interpreting MTF50 – Calculation details – Links Introduction Sharpness is arguably the most important photographic image quality factor because it determines the amount of detail an imaging system can reproduce. Sharpness is defined by the boundaries between zones of different tones or colors. Bar pattern: Original (top); with lens degradation (bottom) One way to measure sharpness is to use the rise distance of the edge, for example, the distance (in pixels, millimeters, or fraction of image height) for the pixel level to go from 10% to 90% of its final value. To get around this problem, measurements are made in frequency domain, where frequency is measured in cycles or line pairs per distance (millimeters, inches, pixels, or image height). Green is for geeks.

Syphon Making Digital One-of-a-Kind: Inside Icarus’ Generative Album in 1000 Variations Even the artwork changes. This is my personal copy – #148. Digital: disposable, identical, infinitely reproducible. Recordings: static, unchanging. Or … are they? Icarus’ Fake Fish Distribution (FFD), a self-described “album in 1000 variations,” generates a one-of-a-kind download for each purchaser. If you’re the 437th purchaser of the limited-run of 1000, in other words, you get a composition that is different from 436 before you and 438 after you. Happily, the music is evocative and adventurous, a meandering path through a soundworld of warm hums and clockwork-like buzzes and rattles, insistent rhythms and jazz-like flourishes of timbre and melody. You can listen to some samples, though it’s just a taste of the larger musical environment. Fake Fish Distribution – version 500 sampler by Icarus… 12 GBP buys you your very own MP3 (320 kbps). The creators weigh in on the project for Q Magazine:Guest column – Electronic band Icarus on whether algorithms can be artists? More notes on the album: