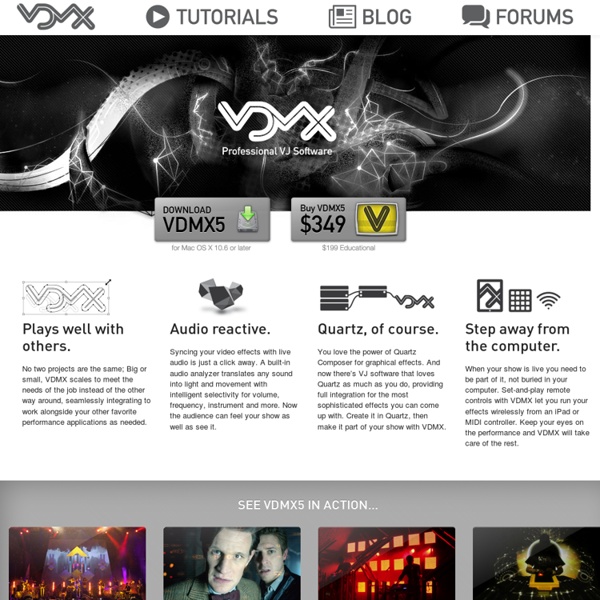 Syphon Millumin Maxuino Graffiti Research Lab The United States of America is going out of business! But here at the U.S. Department of Homeland Graffiti, we want to turn this moment of national embarrassment and hard times into real savings for you and your family. From June 4th through the 28th, the U.S.D.H.G and the Graffiti Research Lab are liquidating all confiscated, high-tech graffiti artifacts and tools, expunged evidence, court exhibits, redacted documents and office furnishings, priced to sell. Artist’s Reception: First Friday, June 6th, 2008 8 p.m. ’til late • free and open to the public Exhibition runs from June 4th – June 28th Terrortites 2-layer U.S.D.H.G. Homeland Security Advisory Canvas U.S.D.H.G. More SALE items here on fuckflickr.

P V P What is ProVideoPlayer™? Order PVP2 Now! Since its original release 8 years ago, PVP has been used by organizations around the world to create video walls, digital signage, dynamic staging and much more. While the software may work on systems that do not meet these requirements, those systems will not be supported. ProVideoPlayer 2 (minimum Mac specifications) Processor: 64-Bit Intel Core 2 Duo processor or better OS: Mac OS X 10.8 (Mountain Lion) up to 10.10 (Yosemite) RAM: 4 GB RAM NOTE: For heavy or advanced use of video (i.e. multiple outputs, multiple layers, HD content, etc.), a faster system is advised. General Enhancements ProVideoPlayer 2 features an all new UI. Multiple Screens Since its inception, ProVideoPlayer has been used by our customers to create unique, multi-screen presentations using both external graphics modules (such as the Matrox TripleHead2Go) or networking multiple computers over a network and using the powerful network triggering that exists in the software.

Working with Hardware: DMX, Part 3 In this final article in the DMX set, I’m going to walk through the process of creating the DMX system we used to make the video below. We needed to write a very specific hardware–focused Max patch to get this to work. My hope is that some of the ideas and techniques used to create this system will be useful to you in your explorations of your own DMX hardware based projects. Part 1 – the hardware. For this system I used the following gear. LanBox LCX: The Lanbox is my go-to DMX interface, it’s bomb-proof and loaded with functionality.American DJ Revo 4: This is a DMX controlled 256 channel led projector. Part 2 – the software. Max 6 – of course! An install of the helper utilities and externals for the LanBox. If you use different DMX hardware, you’ll have your own system for this. For access to the Kinect data, I used the jit.freenect external developed by Jean-Marc Pelletier. I also decided to use some more of Jean-Marc’s awesome software to manage the video data from the Kinect.

Theodore Watson - Interactive Installations - 2011 CoGe Software Max (Wikipedia) Max is a visual programming language for music and multimedia developed and maintained by San Francisco-based software company Cycling '74. During its 20-year history, it has been used by composers, performers, software designers, researchers, and artists for creating recordings, performances, and installations. The Max program itself is modular, with most routines existing in the form of shared libraries. An API allows third-party development of new routines (called "external objects"). As a result, Max has a large user base of programmers not affiliated with Cycling '74 who enhance the software with commercial and non-commercial extensions to the program. Miller Puckette originally wrote Max at IRCAM in the mid-1980s, as the Patcher editor for the Macintosh to provide composers with an authoring system for interactive computer music. In 1989, IRCAM licensed it to Opcode Systems, which sold a commercial version in 1990 called Max (developed and extended by David Zicarelli).

kinect As kindly pointed by master Memo, I tested my hardware latency. First photo is the projector latency: displaying the same timecode on both computer screen and the projector, in this case an Optoma EP759. On top the proector timecode, bottom the computer timecode: Result is a 16ms latency. 1 frame at 60FPS. Now testing the Kinect unit. Result is an amazing 80ms latency ! Each test was repeated 3 times in order to have consistent results. Since the Kinect is grabbing frames -apparently- at 30FPS, I’ll lock my output to 30FPS as well, and hopefully reduce the latency to 3 frames… I’d be happy if anyone can confirm these tests.

VPT 6.0 VPT 8 by HC Gilje, released may 2018. Video Projection Tool (VPT) is a free multipurpose realtime projection software tool for Mac and Windows. VPT 7 was downloaded over 100000 times, so in spite of a lot of other options available VPT still is popular. Among other things it can be used for projecting mapping on complex forms, adapt a projection to a particular space/surface, combine recorded and live footage, for multiscreen HD playback, for interactive installations using arduino sensors or camera tracking ++. VPT is very flexible in terms of control, with presets and a built in cue list, as well as control over almost every single parameter using OSC, midi, serial communication, built in LFOs and ArtNet. VPT 8 is recommended for mac OS 10.12 or later and Windows 7 and 10 (although VPT 7 works great on Windows 7). and yes, it is still FREE! VPT 8 has a lot of under-the-hood changes. System Requirements Mac An Intel® Mac with Mac OS X 10.7 (or later). VPT 8 online manual Download VPT 8 mac