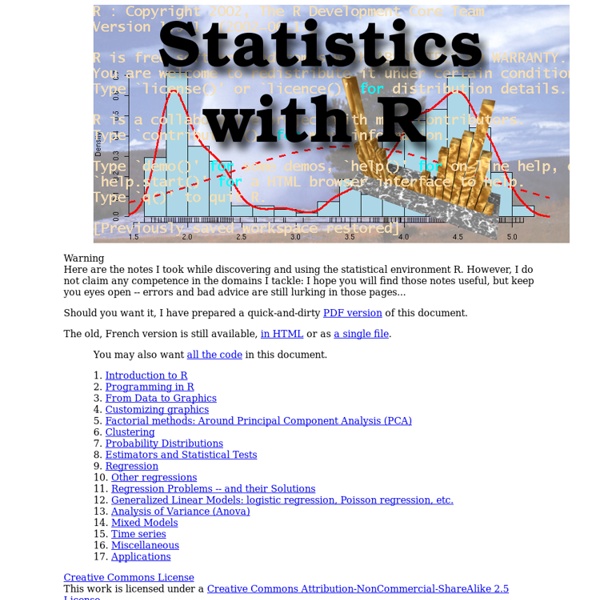 Warning Here are the notes I took while discovering and using the statistical environment R. However, I do not claim any competence in the domains I tackle: I hope you will find those notes useful, but keep you eyes open -- errors and bad advice are still lurking in those pages... Should you want it, I have prepared a quick-and-dirty PDF version of this document. The old, French version is still available, in HTML or as a single file. You may also want all the code in this document. 1. This work is licensed under a Creative Commons Attribution-NonCommercial-ShareAlike 2.5 License.

software for artists and vj's Fugio (pronounced foo-gee-oh) is a software platform for building digital art quickly, with no programming experience required. Simple, clear design There are building blocks called nodes that have inputs and outputs. Link the inputs to the outputs using your mouse. You now know how to use Fugio! Learn useful, transferable knowledge

R by example Basics Reading files Graphs Probability and statistics The R programming language for programmers coming from other programming languages IntroductionAssignment and underscoreVariable name gotchasVectorsSequencesTypesBoolean operatorsListsMatricesMissing values and NaNsCommentsFunctionsScopeMisc.Other resources Ukrainian translation Other languages: Powered by Translate Introduction Software - Miquel De Cáceres Ainsa Indicspecies R package Indicator species are species that are used as ecological indicators of community or habitat types, environmental conditions, or environmental changes. In order to determine indicator species, the characteristic to be predicted is represented in the form of a classification of the sites, which is compared to the patterns of distribution of the species found in that set of sites. 'Indicspecies' is an R package that contains a set of functions to assess the strength of relationship between species and a classification of sites. As such, it includes the well-known IndVal method (Dufrêne & Legendre 1997) and extends it by allowing the user to study combinations of site groups (De Cáceres et al. 2010). Apart from the IndVal index, the package allows computing many other indices suitable for this kind of associations (De Cáceres & Legendre 2009), such as the phi coefficient of association.

Non-commercial NUKE Want to learn NUKE for free, at your own pace? Now you can—with newly available NUKE Non-commercial. That’s right: we’re offering free, non-watermarked versions of NUKE, NUKEX and even top-of-the-line NUKE STUDIO to anyone who wants to learn, explore and have fun! If you want to learn to composite, edit and finish with industry-leading tools, NUKE Non-commercial is for you. R Tutorial — R Tutorial 321a Boyd Graduate Studies University of Georgia Athens, Georgia 30602 Introductory Materials¶ R Tutorial: Basic Probability We look at some of the basic operations associated with probability distributions. There are a large number of probability distributions available, but we only look at a few. If you would like to know what distributions are available you can do a search using the command help.search(“distribution”).

knitr: Elegant, flexible and fast dynamic report generation with R Overview The knitr package was designed to be a transparent engine for dynamic report generation with R, solve some long-standing problems in Sweave, and combine features in other add-on packages into one package (knitr ≈ Sweave + cacheSweave + pgfSweave + weaver + animation::saveLatex + R2HTML::RweaveHTML + highlight::HighlightWeaveLatex + 0.2 * brew + 0.1 * SweaveListingUtils + more). This package is developed on GitHub; for installation instructions and FAQ’s, see README. This website serves as the full documentation of knitr, and you can find the main manual, the graphics manual and other demos / examples here. For a more organized reference, see the knitr book.