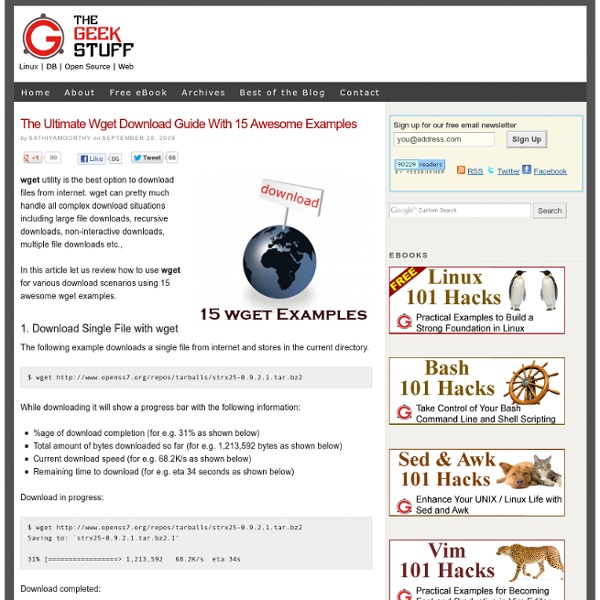 wget utility is the best option to download files from internet. wget can pretty much handle all complex download situations including large file downloads, recursive downloads, non-interactive downloads, multiple file downloads etc., In this article let us review how to use wget for various download scenarios using 15 awesome wget examples. 1. The following example downloads a single file from internet and stores in the current directory. $ wget While downloading it will show a progress bar with the following information: %age of download completion (for e.g. 31% as shown below)Total amount of bytes downloaded so far (for e.g. 1,213,592 bytes as shown below)Current download speed (for e.g. 68.2K/s as shown below)Remaining time to download (for e.g. eta 34 seconds as shown below) Download in progress: Download completed: 2. Wrong: Following example will download and store the file with name: download_script.php? 3. 4. 5. 6. 7. 8. 9. Related:  Tutorial

Gradle Beyond the Basics Dependencies are a formidable challenge, whether they are dependencies in a Java build, in a Ruby project, or in any other kind of system. For one thing to depend on another means accepting the liability that the depended-on thing might not be available when we need it, might be expensive to obtain, or might not work in the way we expected. Programmers are painfully familiar with these costs. Dependencies can seem like an annoyance—indeed, much of the undeserved criticism commonly directed against Maven focuses on dependency management—but they are an unavoidable fact of a complex ecosystem and are a sign that the actors in that ecosystem are trying to divide up their labor in worthwhile ways. We will consider the problem of dependency management primarily from a Java perspective, since the Java community has excelled both in creating an enormous dependency management problem, and in solving it effectively. In a Gradle build script, you declare dependencies via a DSL (Example 4-1).

For Your Script Loading Needs As JavaScript usage has skyrocketed over the last few years, so has the sheer number of scripts that are being loaded in an average web page. With these script tags comes a lot of baggage, such as blocking and lack of dependency management. Today, I'd like to bring your attention to a number of JavaScript loaders, which are mini toolkits that significantly simplify how you add and load scripts. The Problem with Simple Script Tags They Block the Page The page stops 'happening' while the script is downloaded. JavaScript files loaded using the script tag are blocking by nature. No Easy Way to Manage Dependencies Lack of dependency management is a big drawback. Next up comes the issue of handling dependencies. Available Choices The initial idea for this round up was sparked by a post over at Hacker News about making a list of JavaScript script loaders, roughly a month ago. Now that sufficient time has passed, I think that list is going to be quite massive. HeadJS Author: Tero Piirainen Size: 6.3 KB

code, coffee from the trenches Limitations of Android Dependency Injection Solutions A question that I often in my work as the Spring Developer Advocate at SpringSource is: How do I do dependency injection in Android? Spring for Android doesn't have a dependency injection story as there are a lot of restrictions to what an inversion-of-control (IoC) container can hope to achieve on Android. First, Android controls all the important objects in an Android application including the Activity instances. Second, reflection has historically been very slow on Android (and any constrained environment, including the original PCs that debuted Java in 1994!) Dagger With all of these limitations in mind, I still personally like Dagger, from Square. A Dagger Module The simplest way to get started with it is to create a module class. You'll note a few things of interest already. As shown, we could start declaring fields or constructor arguments in our WelcomeActivity instance and annotating them with JSR 330's @Inject. Summary

Valgrind Home Markdown Syntax Documentation Note: This document is itself written using Markdown; you can see the source for it by adding ‘.text’ to the URL. Overview Philosophy Markdown is intended to be as easy-to-read and easy-to-write as is feasible. Readability, however, is emphasized above all else. A Markdown-formatted document should be publishable as-is, as plain text, without looking like it’s been marked up with tags or formatting instructions. To this end, Markdown’s syntax is comprised entirely of punctuation characters, which punctuation characters have been carefully chosen so as to look like what they mean. Inline HTML Markdown’s syntax is intended for one purpose: to be used as a format for writing for the web. Markdown is not a replacement for HTML, or even close to it. For any markup that is not covered by Markdown’s syntax, you simply use HTML itself. The only restrictions are that block-level HTML elements — e.g. For example, to add an HTML table to a Markdown article: This is a regular paragraph. &copy; 4 &lt; 5 1.

15 Tools For Finding a Perfect Domain Name When an idea of making a new website strike your mind, the first thing you do is to search a domain name matching to the objectives and category of site. Every day when number of sites are being registered, getting the domain name you desire can be a cumbersome job. To help webmasters,thankfully we have different tools for checking out the availability of exact domain name you have been looking for or getting matching names if the desired one is not available. Today we have collected a list of more than 15 tools where you can get the desired information. Some of these websites also provide you with additional information like the current registrar of the domain name you are looking for, its expiry date, similar domain name with other extensions, page ranks on different platforms of current sites working wit similar names and so on. Check out this post and grab your favorite domain name at the earliest before its gone. Advertisement Domain Typer More Information on Domain Typer DomBuddy Dyyo

.bash_profile vs .bashrc When working with Linux, Unix, and Mac OS X, I always forget which bash config file to edit when I want to set my PATH and other environmental variables for my shell. Should you edit .bash_profile or .bashrc in your home directory? You can put configurations in either file, and you can create either if it doesn’t exist. But why two different files? What is the difference? According to the bash man page, .bash_profile is executed for login shells, while .bashrc is executed for interactive non-login shells. What is a login or non-login shell? When you login (type username and password) via console, either sitting at the machine, or remotely via ssh: .bash_profile is executed to configure your shell before the initial command prompt. But, if you’ve already logged into your machine and open a new terminal window (xterm) inside Gnome or KDE, then .bashrc is executed before the window command prompt. .bashrc is also run when you start a new bash instance by typing /bin/bash in a terminal.

Alternative Interfaces Preface Working with both Object-Oriented software and Relational Databases can be cumbersome and time consuming. Development costs are significantly higher due to a paradigm mismatch between how data is represented in objects versus relational databases. Hibernate is an Object/Relational Mapping solution for Java environments. The term Object/Relational Mapping refers to the technique of mapping data from an object model representation to a relational data model representation (and visa versa). Note While having a strong background in SQL is not required to use Hibernate, having a basic understanding of the concepts can greatly help you understand Hibernate more fully and quickly. Hibernate not only takes care of the mapping from Java classes to database tables (and from Java data types to SQL data types), but also provides data query and retrieval facilities. If you are new to Hibernate and Object/Relational Mapping or even Java, please follow these steps: Trying stuff out and reporting bugs.