How To Project On 3D Geometry 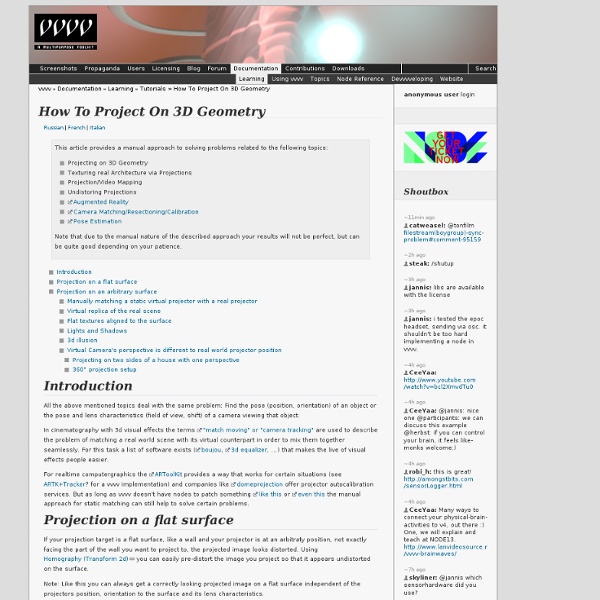 Russian | French | Italian Note that due to the manual nature of the described approach your results will not be perfect, but can be quite good depending on your patience. Introduction All the above mentioned topics deal with the same problem: Find the pose (position, orientation) of an object or the pose and lens characteristics (field of view, shift) of a camera viewing that object. In cinematography with 3d visual effects the terms "match moving" or "camera tracking" are used to describe the problem of matching a real world scene with its virtual counterpart in order to mix them together seamlessly. For realtime computergraphics the ARToolKit provides a way that works for certain situations (see ARTK+Tracker? Projection on a flat surface Note: Like this you can always get a correctly looking projected image on a flat surface independent of the projectors position, orientation to the surface and its lens characteristics. Projection on an arbitrary surface Virtual replica of the real scene Related:  marchipanta • `test 1023

VPT 6.0 VPT 8 by HC Gilje, released may 2018. Video Projection Tool (VPT) is a free multipurpose realtime projection software tool for Mac and Windows. VPT 7 was downloaded over 100000 times, so in spite of a lot of other options available VPT still is popular. Among other things it can be used for projecting mapping on complex forms, adapt a projection to a particular space/surface, combine recorded and live footage, for multiscreen HD playback, for interactive installations using arduino sensors or camera tracking ++. VPT 8 is recommended for mac OS 10.12 or later and Windows 7 and 10 (although VPT 7 works great on Windows 7). and yes, it is still FREE! VPT 8 has a lot of under-the-hood changes. System Requirements Mac An Intel® Mac with Mac OS X 10.7 (or later). Windows PC with Windows 7 (or later); Multicore processor; 2 GB RAM; 1024×768 display, an OpenGL-compatible graphics card, and OpenGL 1.4 (or later) VPT 8 online manual Download VPT 8 windows VPT 8 mac extras: VPT 8 Videotrigger windows

How to design a beautiful basemap for data — Mapsense Groups: Apply similar styles to similar classes of features Your viewers will use color to read the feature types on the map, so help them out by reducing the dozens of unique features into a few sensible groups. All parks should be similar to each other in value, hue, etc, and don’t choose a significantly different color for big lakes vs little lakes or you’ll create confusion. Hierarchy: Use greater contrast to indicate significance, especially in a class like roads When there is an inherent hierarchy built in (as in the case with roads), make sure this is reflected in the contrastiness of the color- the more significant the road, the greater the contrast from the background. Stroke-width is also a helpful way of distinguishing different levels in your hierarchy.

Robert Henke Comment l’impression 3D va révolutionner le monde et le retail VjCentral.it How 16th-Century European Mapmakers Described the World’s Oceans - Atlas Obscura According to medieval mapmakers, the world was made up of three continents ringed by narrow bodies of water. When the voyages of Christopher Columbus, Amerigo Vespucci, and Ferdinand Magellan uncovered continents previously unknown to Europeans, this posed a major problem for those cartographers. But these explorers did not just stumble upon uncharted land—they also became aware of expansive stretches of ocean around the world. For the first time, Europeans were confronted with the realization that they lived on a blue planet, with 71 percent of the Earth’s surface covered by water. For explorers, these oceans were dangerous obstacles. The oceans also posed a problem for mapmakers. The discovery of massive bodies of water forced mapmakers to devise creative solutions. Sixteenth-century mapmakers also invented massive “undiscovered” continents to fill the oceans. Other cartographers embraced the ocean’s blank canvas in a different way: by emphasizing just how empty it was.

Interactive Digital Installation Features a Sea of Flowers that Magically Burst into Bloom A sea of flowers magically blooms and withers in this stunning digital installation by teamLab, a collective made up of tech specialists that include architects, programmers, CG animators, and more. Titled Flowers and People, Cannot be Controlled but Live Together, for Eternity, the stunning display consists of a walkway covered with real-time renderings of gorgeous flora found in Tokyo. Cherry blossoms, rape blossoms, and other blooms burst into cascades of colorful petals, and then slowly fade away to make room for the new buds of flowers from another season. Similar to another version of the installation displayed in Usuno last year, this artwork is interactive. Visitors' movements, whether they're walking or standing still, cause flowers to spring up or wither away. "The boundary between the work of nature and the work of humans is extremely vague. teamLab's website via [Shop Influxx]