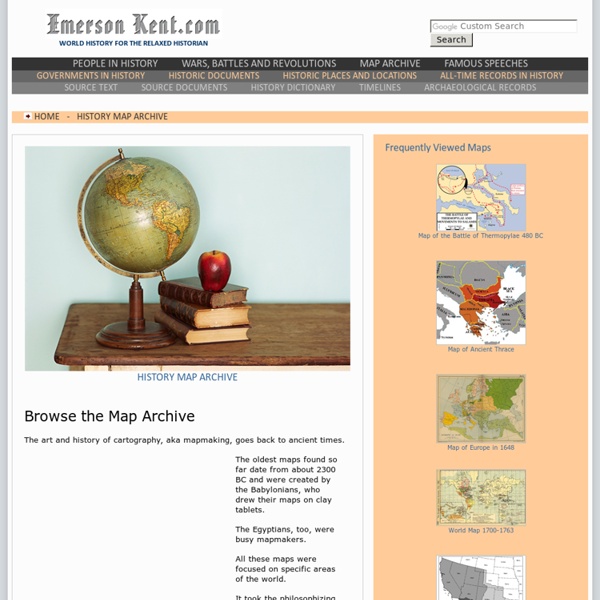 Browse the Map Archive The art and history of cartography, aka mapmaking, goes back to ancient times. Or at least what they thought it could look like. Our English word map derives from the Latin word mappa, meaning napkin or cloth on which maps were drawn. The Map Archive This map collection is indexed chronologically and by continent. Some Map History and Trivia This little gem is a world map compiled around 700 to 500 BC by the ancient Babylonians: Babylonian World Map British Museum London See more details about this ancient map provided by the British Museum. And here is Herodotus' Map of the World. MAP OF THE WORLD — HERODOTUS Library of Congress, Washington, D.C. Comparing drawings from several lunar eclipses, Aristotle observed that Earth cast always a circular shadow on the moon, no matter the moon's trajectory. By 150 BC, the philosopher Crates had fashioned a globe, and others followed. Martin Behaim's 1492 Globe is the Oldest One in Existence More from the More History Related:  Maps And Mapping • Storia

Explore georeferenced maps - Map images © Harris Corp, Earthstar Geographics LLC© 2016 IntermapEarthstar Geographics SIO© 2016 Microsoft Corporation© 2010 NAVTEQ© ANDTerms of Use© 2016 DigitalGlobeImage courtesy of NASAImage courtesy of USGS© Getmapping plc© 2016 GeoEye© 2016 Pasco© GeoContent / (p) IntergraphImage courtesy of the IndianaMapImage courtesy of the Nevada State Mapping Advisory Committee© 2016 InterAtlas© 2016 Eurosense© 2016 IGP© 2016 IGN© Province of British Columbia© 2016 Blom© 2016 Aerials ExpressImage courtesy of LAR-IACImage courtesy of ImagePatch.comState of Michigan© 2012 DigitalGlobe© 2010 MapData Sciences Pty Ltd, PSMA© 2010 Zenrin Periodis Web - Maps to be Used for the History of Europe Euratlas Periodis Web shows the history of Europe through a sequence of 21 historical maps, every map depicting the political situation at the end of each century. Here, on the left, are 21 mini-maps giving access to 21 full maps and to 84 quarters of maps with more detailed views of the states, provinces and main cities.Moreover, each map offers a historical gazetteer. Thus you can highlight in red each sovereign state and in green each dependent entity. See the Map Legend for more details. Navigation through the atlas is easy: on the left side of the pages, you simply need to choose a century for temporal navigation. Periodis is a historical atlas of a new kind. History by Periods History is a continuous string of events among which prominent facts sometimes emerge: wars, conquests, revolutions etc. Names Names of entities mentioned in the Periodis Historical Atlas are those officially used at the considered time.

Victorian London in Incredible Detail Here’s a real treat. The National Library of Scotland’s Map Department, supported by David Rumsey, have taken some very high-resolution scans of the Ordnance Survey 1:1056 (that’s 60 inches to the mile!) set of 500+ maps of London issued between 1893 and 1896 and, crucially, reorientated and stitched them together, so that they can be presented seamlessly (using OpenLayers) on top of a “standard” Google web map or OpenStreetMap, with the base map acting as a modern context. The detail in these maps is breathtaking. In the above extract (direct link) of the eastern end of Fleet Street, you can see each individual alleyway. Much of London has of course changed in the intervening 120 years. Here are the individual towers, rooms and staircases, in part of the Tower of London: Here’s University College London’s main building – with internal stairways, rooms and even wall thicknesses visible. While many areas are largely unchanged from 120 years ago, some places are distinctively different.

Timelines of History, Today in History, World History The Perfect 22-Foot Map for Your Ancient Roman Road Trip A close-up of the Tabula Peutingeriana. (Photo: Public Domain/WikiCommons) If you’re planning a road trip in ancient Rome, you'll need two things: a time machine, and the Tabula Peutingeriana. Also known as the “Peutinger Map,” the Tabula illustrates the complex road networks of the Roman Empire. This segment includes the boot of Italy, the Mediterranean Sea, and what's now southern Tunisia and Tripolitania. Given the size of the Roman Empire at its height, your ancient road trip could start in Europe and have stops in North Africa, the Middle East, and parts of Asia. If Atlas Obscura existed in ancient Rome, we'd probably recommend that you check out the mountain views by the Tarento resupply station or the excellent foot courier treatment along the Coriello coast. The full expanse of map, all 6.75 meters of it. The public roads, or cursus publicus, marked on the Tabula Peutingeriana were built in the first century under Emperor Augustus to improve imperial communication.

English Dissenters: Ranters Ranters embraced the general concept of the "indwelling spirit", a form of religious perfection. Whatever was done in the Spirit was considered justifiable to a Ranter. Man was therefore free of Sin and the Laws of Moses. As with others nonconformists during this period, the very nature of religion was being called into question. Outward forms of religion were rejected. Contemporaries of the period often compared the Ranters and the Quakers as being cut from the same bolt of cloth. Ranters and some Quakers of the period were known to cavort in the all together. Nudity in all its forms was considered a major societal taboo during the period. The Adamites of the early 1640's were often stereotyped in the nude. , [fl. 1650-1652] was a prominent Ranter leader. , or better known as was also a prominent radical of the period. , a companion of Clarkson, and who like Clarkson was imprisoned for acts against the public welfare, and for his own radical writings. Primary Sources [Anon.] [Anon.]

A sneak preview of 3D Imaging at the Osher Map Library and Smith Center for Cartographic Education | Osher Map Library Moving forward into the future of digitizing our cultural heritage, OML’s Digital Imaging Center is engaged in an innovative project to three-dimensionally image the library’s rare globe collection, the second-largest of its kind in a U.S. public institution. Generous grants from the National Endowment for the Humanities and the Friends of the Osher Map Library support the conservation, and subsequent 3D imaging, of the collection's most threatened or valuable items. Digitization will make it possible for students and members of the public to manipulate and examine the rare globes online, preventing potential handling damage to these delicate objects. E-Commerce meets Cultural Heritage The commercial company, Ortery, provided the equipment and software used to three-dimensionally image the globes. Ortery’s technology enables the photographer to capture an object from almost every angle, building a three-dimensional digital model. Digitizing globes at the Osher Map Library Post-Production

The Thousand-Year Graveyard | Science News Badia Pozzeveri Churchyard, Altopascio, Italy—On a hot afternoon in July 2012, Giuseppe Vercellotti was digging up bones near the wall of an abandoned medieval church here, thinking about getting a cold drink, when he heard his students call his name. Faces glistening with sweat, they told him that they had found something strange buried half a meter down. Vercellotti took a look and saw a layer of lime, used in ancient times to squelch the stench of rotting corpses. When he tapped the hard layer with his trowel, it sounded hollow. “We immediately thought it was a mass grave,” says Vercellotti, a biological anthropologist at Ohio State University, Columbus, who co-leads a field school here. But the students were apprehensive: “They all started talking about possible contagion,” Vercellotti says. It was the end of the summer field season.

Flag Stories Mass suicide at Pilenai: Lithuanian Defenders Choose Death over Enslavement The Crusades are best known as a series of military campaigns launched by Western European states, and sanctioned by the Roman Catholic Church, aimed at reclaiming the Holy Land from the Muslims. Less well-known, perhaps, are the other wars sanctioned by the papacy, such as the Spanish Reconquista, the Albigensian Crusade and the Northern Crusades. It was during the Northern Crusades that a rather horrific episode in Lithuanian history occurred – the mass suicide at Pilenai, which is the largest known mass suicide in history. The hill fort bearing Margiris name in Punia, one of the many suggested locations of Pilėnai. Wikimedia Commons The Northern Crusades (also known as the Baltic Crusades) were carried out between the 11th to the 15th centuries. By the 13th century, the crusaders in the Holy Land were losing ground to the Muslims, and the German Teutonic Order decided to bring the crusades back to their homes in Northern Europe, where there was still a significant pagan population.