What is the Universe Expanding Into? 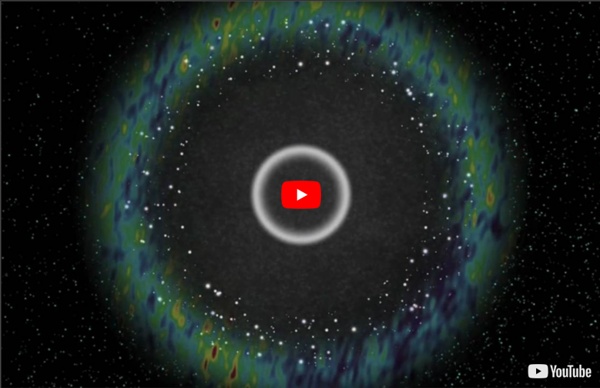 The Quest For Life How did life on Earth begin? Is there life beyond our planet? Is there a future for humankind on other planets? This documentary examines the search for life, from its origins on Earth to possibilities in space. The quest for answers takes EXPLORING SPACE to earthly locales ranging from Greenland to the mountains of eastern Mexico, from a French vineyard to a research facility in Japan – as well as deep into outer space. Earth may be a rare environment uniquely designed for nurturing living organisms, but as humans explore the creation of the planet, the realization grows that the answers to the origins of life may lie beyond earthly bounds. Watch the full documentary now (playlist - 2 hours) First Planck results: the Universe is still weird and interesting Our current model of cosmology—the origin and structure of the whole Universe—has survived another major test, with the release of the first 15 months of data from the Planck mission. Planck is a European Space Agency mission, designed to study the cosmic microwave background (CMB), which preserves information about the conditions that persisted immediately after the Big Bang. Combined with results from prior experiments, Planck has revealed a Universe a little older than previously thought, and with a slightly different balance of ingredients. But amid these incremental changes, there was a bit of a surprise: despite the best hopes of researchers, Planck data does not rule out the existence of anomalous temperature fluctuations at large scales. Planck is a phenomenally sensitive instrument, kept at a 0.1° C above absolute zero by the use of liquid helium. That image helps tell us the Universe's age. Tiny fluctuations have big meanings The weird side of the CMB

Monster of The Milky Way Astronomers are closing in on the proof they’ve sought for years that one of the most destructive objects in the universe - a super massive black hole - lurks at the center of our own galaxy. Could it flare up and consume our entire galactic neighborhood? NOVA takes us on a mind-bending investigation into one of the most bizarre corners of cosmological science: black hole research. From event horizon to singularity, the elusive secrets of supermassive black holes are revealed through stunning computer-generated imagery, including an extraordinary simulation of what it might look like to fall into the belly of such an all-devouring beast. Space, itself, is falling inside the black hole. It’s rather like a river falling over a waterfall. Watch the full documentary now

Universal Formula for Cosmic Voids +Enlarge image N. Hamaus/Paris Inst. of Astrophys. & M. Warren/Los Alamos National Lab Most of the matter in the Universe consists of the mysterious dark matter, and cosmologists would like to better understand how it is organized in space. Scarcely anything is known about dark matter except that, apart from its gravitational effects, it hardly interacts with ordinary matter or light. Earlier simulations have shown that a uniform dark matter “gas” collapses under its own gravity into a tangled web of sheets and filaments that is permeated by relatively empty voids [1, 2]. Nico Hamaus of the Paris Institute of Astrophysics and his co-workers have now carried out simulations that probe the density profiles of dark matter voids in more detail than previous studies. Just as in previous studies, the dark matter clustered and created voids having a wide range of shapes and sizes. –Philip Ball References J.

Cosmic Voyage Nominated for an Academy Award, this 36-minute IMAX production offers a state of the art, computer generated journey through the universe, and tries to pinpoint the role of human beings cohabitating within its vastness. Among the topics included are a variety of the greatest scientific theories known to exist - some of which had never before been visualized on film - as well as a guided tour through the cosmos and solar system, and a look at the nature of black holes and exploding supernovas. This IMAX offering presents us with not only one but two journeys - one in space (going from the entire universe to quarks) and one in time (going from the first cells to human beings). These are both monumental enterprises, but unfortunately this half-hour movie can only offer us an inkling of either. Watch the full documentary now

Better Not Avoid A Cosmic Void (Inside Science) -- Sometimes nothingness can reveal a whole lot. While the universe is mostly empty, it contains bubble-like voids that are even emptier, taking up most of the space in the cosmos. And new research shows that these voids all look similar regardless of size — a consistency that may help unravel some of the universe's biggest mysteries. If you zoom way out, all the matter in the universe looks like a huge cobweb, consisting of an expansive network of filaments and wall-like structures that crisscross one another. More than 80 percent of this matter is dark matter, the invisible and mysterious stuff that appears to interact only gravitationally with the regular matter that makes up stars and galaxies. Residing in these filaments and walls of dark matter are galaxies, and the densest regions — where the filaments intersect — are sites of massive clusters of hundreds to thousands of galaxies. But between the filaments and walls of this cosmic web are vast cosmic voids.

Cosmos: A Personal Voyage With Cosmos, Carl Sagan and his wife and co-writer, Ann Druyan, brilliantly illustrated the underlying science of his same-titled book, placing the human species within a space-and-time context that brought the infinite into stunningly clear view. The series, which originally aired in 1980 on PBS, has been seen by more than 700 million people worldwide and remains a high-water mark in miniseries history. Sagan lucidly explains such topics as Einstein's theory of relativity, Darwin's theory of evolution, and the greenhouse effect, bringing the mysteries of the universe down to a layman’s level of understanding. This documentary inspired me to a love of science, learning, and freedom of inquiry that have shaped both my interests and intellectual curiosity.

3D Galactic Map May Solve Interstellar Puzzle Scientists have created the first 3D map of a type of astronomical interference that has puzzled astronomers for nearly a century. The new map could help scientists finally nail down the identity of the material that creates "diffuse interstellar bands" (DIBs) in observations of stars, the study authors said. The researchers focused on the single DIB 8620, one of over 400 absorption lines, with the goal of narrowing down its source. [Top 10 Star Mysteries] "DIB 8620 does not seem special compared to other DIBs," lead author Janez Kos, of the University of Ljubljana in Slovenia, told Space.com by email. However, as a spectral feature often used to measure stellar motion, it is "the most observed DIB." The result was the first large-scale map of DIB interference, and the first three-dimensional study of the DIB-bearing clouds in the interstellar medium. Some of the first proposed sources were molecules on dust grainsbetween stars, according to Kos.