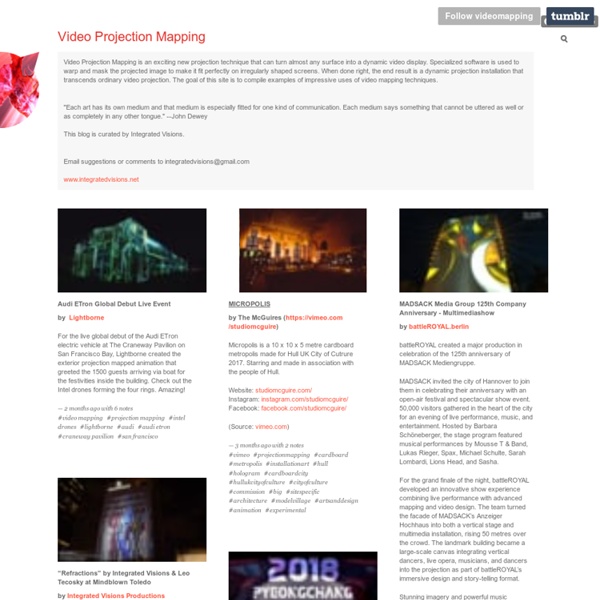 by battleROYAL.berlin battleROYAL created a major production in celebration of the 125th anniversary of MADSACK Mediengruppe. MADSACK invited the city of Hannover to join them in celebrating their anniversary with an open-air festival and spectacular show event. 50,000 visitors gathered in the heart of the city for an evening of live performance, music, and entertainment. Hosted by Barbara Schöneberger, the stage program featured musical performances by Mousse T & Band, Lukas Rieger, Spax, Michael Schulte, Sarah Lombardi, Lions Head, and Sasha. For the grand finale of the night, battleROYAL developed an innovative show experience combining live performance with advanced mapping and video design. The team turned the facade of MADSACK’s Anzeiger Hochhaus into both a vertical stage and multimedia installation, rising 50 metres over the crowd. Stunning imagery and powerful music combined with historical facts from MADSACK Mediengruppe wow’d the audience.

I Create Mind-Blowing 3d Blacklight Art Installations It’s like becoming Alice in Wonderland, I create my blacklight murals and artwork to be experienced in a true 3d immersive environment, surrounding all who enter in a magical, surreal place, that usually only would exist in the imagination of a childlike dream. Debi cable’s 3d blacklight experience is mobile museum & art installation that’s blowing minds of all ages. Created from the artistic inspirations from the burning man culture and then becoming one of the highlights of music and arts festivals around the world. Insomniac’s Electric Daisy Carnival , burning man , the do labs’ lightning in a bottle , to mystery and in New York & sunset music festival in Florida (and many more) , to dazzling the fine arts patrons of the Beverly Hills art show , as well as creating an incredible installation for an entire wing of Lancaster Museum , celebrating the opening with a unique, glowing 3d mothers day tea party .

Controlling LED strips from MadMapper In addition to being the easiest and quickest video mapping tool, MadMapper can also control lighting? How does that work? We will explain the theory of operation to control lights, and more specifically LED strips, with MadMappers new MadLight feature. For that, we will first do an overview of the devices and technologies needed. Then we will see an example of a simple LED strip installation followed by some details of the installation of “The Cave”. Note that this tutorial focuses on LED strips, but MadLight can control any DMX512 compatible device.

BrightSign Follow these steps to set up your BrightSign player: Note: These instructions outline the setup process for the Local File Networking publishing method. You can use this method to publish presentations to your player via SD card or over your local network. See additional player setup instructions to learn about all player setup methods including B-Deploy and On-Device Setup. The Player Setup Introduction tutorial video will teach you about publishing methods other than Local File Networking.

Visio : le Mobile projector puissant, mobile et analogique Once the lens is mounted, you need to make your projection the most visible. For this, the light of the projection should be more important than ambient light. Only on this condition will your projections be completely visible. The brightness of the projection depends on the aperture of the lens. MultiScreener – Zach Poff Free Synchronized Multi-Channel Video Player MultiScreener is a set of free applications that synchronize the playback of Quicktime movies on multiple computers, using a local network to tie them all together. (It can also sync multiple movies on the same computer using multiple monitors.) It is intended for multi-channel video art, video walls, trade shows, and digital signage.

Projection Mapping Transforms A Norwegian Church Into a Digital Canvas Screencap via In 2012, Moment Factory famously projection-mapped beautiful psychedelic visuals onto the exterior of Barcelona’s iconic Antoni Gaudí-designed Sagrada Familia cathedral. In much higher latitudes in northeast Norway, the smaller Svelvik Church got some projection mapping of its own in Ascent/Descent. Created by Ove Alexander Jamt Dahl, AKA Bazarove, Ascent/Descent was made by mapping the Svelvik Church’s interior, and projecting mesmerizing patterns of lines throughout its various nooks and crannies. Electra, Oresteia and an execution: the daring designs of Hildegard Bechtler – in pictures ‘You never know anything, you can only do your best.” Hildegard Bechtler is modest, but this soft-spoken, keen-eyed designer has created a host of memorable productions. Raised in Stuttgart, Bechtler moved to London in 1970, initially to train in fine art. She then worked in film, and likes the idea that she brings an outsider’s eye to British theatre. “Being a designer is constantly changing, depending on the people you work with,” she says. “Ideally, you forget everything.

Tutorial: Connect Vezér to MadMapper with OSC - Vezér Blog MadMapper, the deservedly popular projection- and pixel mapping application has been updated to version 1.6 a few days ago. One of the most important new feature of the new release is the new toolset to control the app with MIDI, OSC, DMX or even joysticks. Vezér has built-in OSC presets to control some of the most important parameters of MadMapper, and here is a short video demonstration about how to connect Vezér to MadMapper using OSC – watch it, then see the notes below:

Quest STEM - Gert's Passive VGA Adapter 666 for Raspberry Pi (2, B+ & A+) The Gert's Passive VGA Adapter 666 (6-bits per colour channel) is a breakout/add on board for Raspberry Pi (2, B+ & A+). It is an open source hardware by Gert van Loo. The full design files, schematics and other details are available on GitHub. It is a neat and very useful solution for using a VGA screen / monitor with your Raspberry Pi (2, B+ & A+) and is far cheaper than a HDMI to VGA adapter. [Best of 2014] The Year in Projection Mapping Watchers look on as MGNTRN, Romain Tardy's projection-mapped ferris wheel, comes alive. In 2014, projection mapping was amplified: the effects became more detailed, the visuals more electrifying, and the canvases got even bigger. From Flying Lotus’s animated performance sculpture, to Refik Anadol’s immersive media environments, and even to EDM stage design, we saw the medium revitalize the concert experience. Artists experimented with projecting images onto sculptures, human faces, and multiple screens at once, as well as manipulating projections in real-time. Just a few years ago, projection mapping was a fairly new medium for artists. In 2014, however, there was plenty of evidence to show that the practice has taken a firm, lasting hold in digital art.