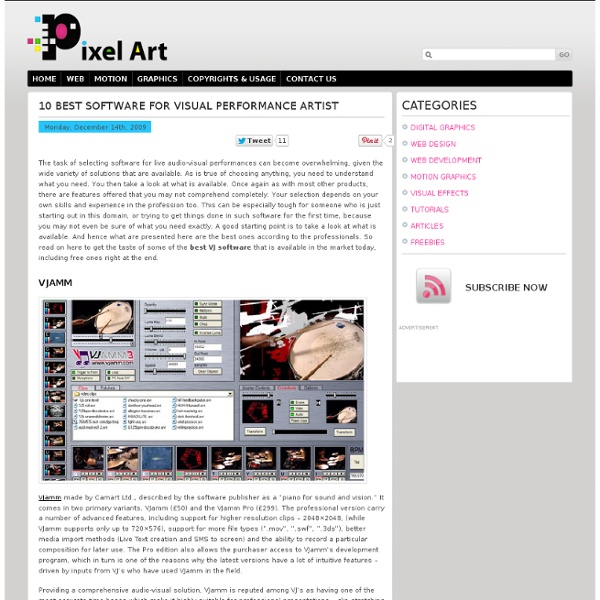 10 Best Software for Visual Performance Artist The task of selecting software for live audio-visual performances can become overwhelming, given the wide variety of solutions that are available. As is true of choosing anything, you need to understand what you need. You then take a look at what is available. Once again as with most other products, there are features offered that you may not comprehend completely. VJamm VJamm made by Camart Ltd., described by the software publisher as a “piano for sound and vision.” Providing a comprehensive audio-visual solution, VJamm is reputed among VJ’s as having one of the most accurate time-bases which make it highly suitable for professional presentations – clip stretching and other clip calisthenics. There are add-ons that can be downloaded such as VJamm Blueprint which is an intuitive tool for creating attractive visual improvisations on-the-fly. But VJamm is for Windows PCs only. AVmixer Pro The interface is attractive as well as intuitive. Modul8

CoGe - Semi-modular Quartz Composer capable VJ Software for Mac OSX - Features Vjtube - VJS and visual artists sharing community WATCHOUT | www.dataton.com WATCHOUT is wowing visitors with the world's largest high definition video wall at Suntec, Singapore. The Big Picture, the 60 metre wide, 15 metre tall display located inside the main entrance at Suntec is the proud recipient of the Guinness World Records title as the 'Largest High Definition Video Wall'. A WATCHOUT system manages the dazzling and dynamic content. Expo 2012 Yeosu, Korea, was the biggest single-site project of the year with WATCHOUT employed in numerous pavilions and events. “We are extremely pleased to see that many pavilions chose WATCHOUT because of the genuine reputation we created for our products and services during the world expo in Shanghai two years ago,” says Fredrik Svahnberg, Marketing Director, Dataton. Dataton WATCHOUT took center stage at the 2010 CBS Upfront event at Carnegie Hall.

P V P What is ProVideoPlayer™? Order PVP2 Now! Since its original release 8 years ago, PVP has been used by organizations around the world to create video walls, digital signage, dynamic staging and much more. While the software may work on systems that do not meet these requirements, those systems will not be supported. ProVideoPlayer 2 (minimum Mac specifications) Processor: 64-Bit Intel Core 2 Duo processor or better OS: Mac OS X 10.8 (Mountain Lion) up to 10.10 (Yosemite) RAM: 4 GB RAM NOTE: For heavy or advanced use of video (i.e. multiple outputs, multiple layers, HD content, etc.), a faster system is advised. General Enhancements ProVideoPlayer 2 features an all new UI. Multiple Screens Since its inception, ProVideoPlayer has been used by our customers to create unique, multi-screen presentations using both external graphics modules (such as the Matrox TripleHead2Go) or networking multiple computers over a network and using the powerful network triggering that exists in the software.

vvvv untitled Painting With Light: Easy Video Mapping Software – bigfug creative software Painting With Light is a complete video mapping tool that enables artists of any technical ability to paint with static and moving images through any video projector onto 3D physical objects. Jump to: Downloads What is Video Mapping? Video projectors are designed to project a single video image onto a screen or wall but now, because we can generate the projected video graphics in real-time with even an entry-level computer (PC or Mac), we can show many video clips at the same time and position them within the screen so they match up with all sorts of 3d physical objects. The image above shows an example live performance that was made using a single video projector, cardboard boxes, and Painting With Light. This technique (also called Projection Mapping) has been adopted by digital artists around the world. Features at a glance [*] features available in 1.5 beta version Do I need a video projector to use PWL? Download Now For Apple OSX, we recommend a minimum of 10.9 (Mavericks). Read the Manual

Vidvox/hap: A codec for fast video playback QC Designers - New to Quartz Composer? Start here. April 24, 2013 5:37 AM PDT Getting started What is QC Designers? QC Designers is a community of UI designers, animators and developers interested in creating more delightful experiences with tools like Quartz Composer. Our focus is on getting people up to speed with QC, but we’ll continue to adapt as new tools come into fashion. While there are other forums for QC users, we cater to Interaction Design, specifically. What is Quartz Composer? From Wikipedia: “Quartz Composer is a node-based visual programming language provided as part of the Xcode development environment in Mac OS X for processing and rendering graphical data.” It is an Apple product used by designers & animators to create animations and prototypes. To create a composition, a user uses the Editor to connect a number of patches with “noodles” that sends a signal from one patch to another. How to download QC Quartz Composer is a free download from Apple’s developer site. YouTube video: Kineme forums.

What is Vuo? | Vuo After the show… Latesha: Great VJ set. How did you make those graphics? Lupe: With Vuo. I'm an artist. Vuo is my paintbrush and canvas. Latesha: I've got a gig next month for The Queen of Pop. Lupe: Yeah! Latesha: Hey, could I make each building appear in sync with the beat? Lupe: Mm-hm. Latesha: Oh! Lupe: Put some force sensors on the stage, connect them to an Arduino, and feed that into Vuo. Latesha: And I want to make the stagelights flicker and shoot fireworks. Lupe: Vuo can control stage equipment. Latesha: I bet I could use Vuo to make the promo video, too. Lupe: Right. Latesha: Thanks for your help! Lupe: No problem. CoGe VJ - Modular VJ software for Mac OSX CoGe VJ is a semi-modular VJ software, which means you can build the environment that suits you the best, and you won't be stuck with a pre-defined interface. You are only limited by the maximum performance of your computer's graphics card and, of course, your imagination. Mix and composite multiple sources, apply stackable effects, automate with sequencers and control surfaces! Audio Analysis in CoGe VJ allows you to modulate parameters using incoming sound. For example, you could change the amount two videos are mixed by binding the opacity of one source to the overall loudness of the sound or a frequency band in the room with just a few clicks. CoGe isn’t a picky VJ software. Legendary support We are always here to help if you need - we aim to get back to all messages within 24 hours but we're usually much faster!