THE VOCAL SLAP DELAY TRICK –  MIX YOUR VOCALS LIKE A PRO – Mixdown Online. MeldaProduction MCompare tutorial. The Anatomy of a Kick Drum. Softube Summit Audio TLA-100A review. Swedish developer Softube has established itself as a hardware emulating class act with its TubeTech range of compressors and EQs, developed in association with TubeTech themselves. 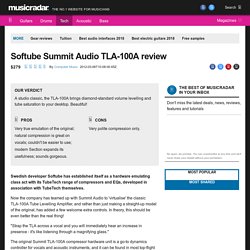 Now the company has teamed up with Summit Audio to 'virtualise' the classic TLA-100A Tube Levelling Amplifier, and rather than just making a straight-up model of the original, has added a few welcome extra controls. In theory, this should be even better than the real thing! Kush Audio Clariphonc Parallel EQ - Mixing With Mike Plugin of the Week. Simple Songwriting with EZKeys by Toontrack. How to se the Yamaha N12 mixing desk in the studio GUIDE. 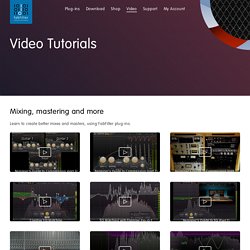 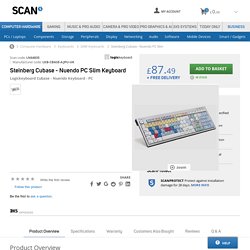 It is ideal for post-production facilities, professional video editing houses and anyone who requires all the custom key commands to readily accessible from a dedicated, clearly labeled, colour-coded keyboard. Using this keyboard is also a great way to learn the Cubase & Nuendo key commands and features all the regular letters, numbers and symbol labelling that you will find on a conventional keyboard, it can simply be used as a substitute for it. Features • Custom LogicKeyboard for Steinberg Cubase & Nuendo• Easy to set up and use. Maximizing Track Count & Saving CPU in Cubase. 5 Mixing Mistakes That are Easy to Fix.

Soundonsound. If you don't understand gain structure, you may be undermining your recordings and mixes without even realising it. 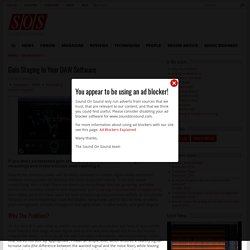 Despite the immense power and flexibility available in modern digital audio worstation software, many people still find that the mixes they craft entirely 'in the box' sound unsatisfying. Why is that? There are obviously many things that can go wrong, and Mike Senior's Mix Mistakes article in SOS September 2011 (/sos/sep11/articles/mix-mistakes.htm) did a better job than I have space for here of exploring many common pitfalls. In this article, I'll focus on one fundamental issue that blights many tracks sent to SOS for help or advice: poor management of levels throughout the signal chain.

In other words, poor gain staging. Why The Problem? I've seen plenty of online discussions in which seasoned engineers are shocked by the ignorance of many would-be engineers about managing signal levels. Analogue Headroom Different In The DAW Keep It Down! Why Overcook? Misleading Meters? Gain Staging with a VU Meter.

Cubase Skills: The Arranger Track. Fixing Recording Latency. The Power of Mastering Your Mix (Using Just TWO Plugins) - Musician on a Mission. Mix breakdown: Little Love by Ashleigh Watson - Warren Huart - Produce Like A Pro. Into The Lair #38 - Instrument Levels in a Mix. The Mastering Show Podcast. Superior Drummer 3: Classic compressor. Windows 10: audio dropouts on multi-core CPU setups – Steinberg Support. In short, the outcome of this is that on systems built around a CPU with more than 14 logical cores*, processing threads exceeding this amount will be carried out as non-real-time (like UI-threads), introducing drop-outs and performance issues. 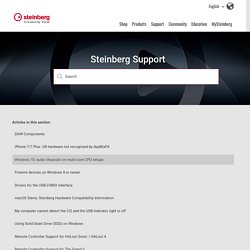 How The Pros Use Compression - Compressing Instruments and Mixes. The Basics of Pop/R&B/Soul/Funk/Jazz Horn Arranging. Mutes (both trumpets/trombones) - Different colors/textures. 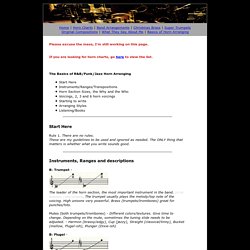 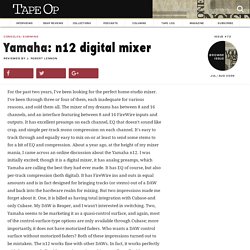 I've been through three or four of them, each inadequate for various reasons, and sold them all. The mixer of my dreams has between 8 and 16 channels, and an interface featuring between 8 and 16 FireWire inputs and outputs. It has excellent preamps on each channel, EQ that doesn't sound like crap, and simple per-track mono compression on each channel. It's easy to track through and equally easy to mix on-or at least to send some stems to for a bit of EQ and compression. About a year ago, at the height of my mixer mania, I came across an online discussion about the Yamaha n12. Audio Drop-Out Nightmares… and a Happy End.

No updates for a long time – what happened? 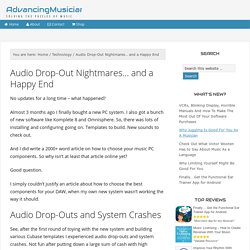 Almost 3 months ago I finally bought a new PC system. I also got a bunch of new software like Komplete 8 and Omnisphere. So, there was lots of installing and configuring going on. Templates to build. Troubleshoot USB dropouts / audio glitches (Windows) – Serato Support. Am I getting USB dropouts? 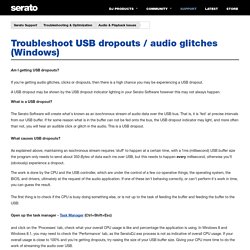 If you're getting audio glitches, clicks or dropouts, then there is a high chance you may be experiencing a USB dropout. A USB dropout may be shown by the USB dropout indicator lighting in your Serato Software however this may not always happen. What is a USB dropout? The Serato Software will create what's known as an isochronous stream of audio data over the USB bus. That is, it is 'fed' at precise intervals from our USB buffer. Kush Audio Clariphonic. Kush have established a reputation for unique‑sounding gear that features idiosyncratic controls, and their Clariphonic is no exception... 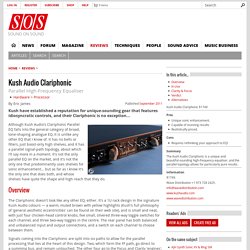 Although Kush Audio's Clariphonic Parallel EQ falls into the general category of broad, tone‑shaping analogue EQ, it is unlike any other EQ that I know of. It has no bells or filters, just boost‑only high shelves, and it has a parallel signal‑path topology, about which I'll say more in a moment. It's not the only parallel EQ on the market, and it's not the only one that predominantly uses shelves for sonic enhancement... but as far as I know it's the only one that does both, and whose shelves have quite the shape and high reach that they do.