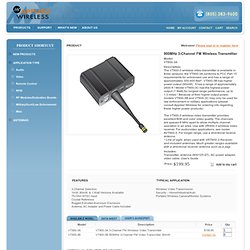 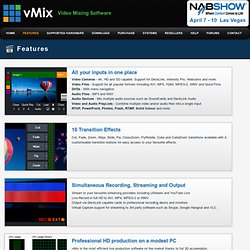 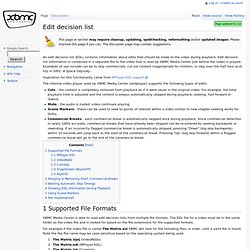 Edit decision list information is contained in a separate file to the video that is read by XBMC Media Center just before the video is played. Examples of use include can be to skip commercials, cut out content inappropriate for children, or skip over the half hour acid trip in 2001: A Space Odyssey . Inspiration for this functionality came from MPlayer EDL support. The internal video player used by XBMC Media Center (dvdplayer) supports the following types of edits: Cuts - the content is completely removed from playback as if it were never in the original video. XBMC Media Center is able to read edit decision lists from multiple file formats. For example if the video file is called The Matrix.avi XBMC will look for the following files, in order, until a valid file is found. 1.1 MPlayer EDL Classic MPlayer EDL files are supported. 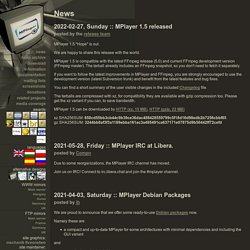 Unfortunately we missed a few opportunities to make a new release, but finally here it comes :) MPlayer 1.4 is compatible with the latest FFmpeg release (4.1) and current FFmpeg development version (FFmpeg master). The tarball already includes an FFmpeg snapshot, so you don't need to fetch it separately. If you want to follow the latest improvements in MPlayer and FFmpeg, you are strongly encouraged to use the development version (latest Subversion trunk) and benefit from the latest features and bug fixes. You can find a short summary of the user visible changes in the included Changelog file. The tarballs are compressed with xz, for compatibility they are available with gzip compression too. MPlayer 1.4 can be downloaded by HTTP (xz, 15 MB), FTP (xz, 15 MB), HTTP (gzip, 21 MB) or FTP (gzip, 21 MB) 3.7. Edit Decision Lists (EDL)

The edit decision list (EDL) system allows you to automatically skip or mute sections of videos during playback, based on a movie specific EDL configuration file. 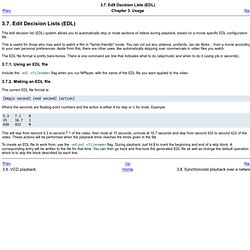 This is useful for those who may want to watch a film in "family-friendly" mode. You can cut out any violence, profanity, Jar-Jar Binks .. from a movie according to your own personal preferences. Aside from this, there are other uses, like automatically skipping over commercials in video files you watch. The EDL file format is pretty bare-bones. There is one command per line that indicates what to do (skip/mute) and when to do it (using pts in seconds). 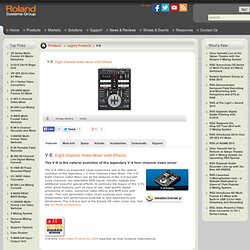 The V-8 Eight Channel Video Mixer has all the features of the V-4 but with more channels, two selectable RGB inputs, monitor outputs and additional powerful special effects. It continues the legacy of the V-4's other great features such as ease of use, high-quality digital processing of video, numerous video effects and BPM sync with music. This next generation video mixer expands your visual presentation and performance potential to new applications and dimensions.

How to View Netflix Watch Instantly in XBMC. Netflix streaming isn’t just a feature that is nice to have, for many people it is a must have for any video streaming software. 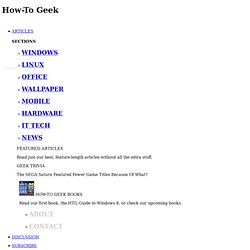 Unfortunately it has been missing from XBMC for various reasons, until today. In order to get Netflix Watch Instantly working in XBMC you just need to have XBMC 10.0+ installed on Windows or OS X. Because of a lack of Silverlight support, this currently does not work on XBMC Live, Linux, or iOS devices (iPhone, iPad, AppleTV). You also need to live in a region that offers Netflix streaming (currently US and Canada).

Install XBMC Flicks To install XBMC Flicks in the latest version of XBMC all you need to do is go into your settings then add-ons. Note: If you don’t see XBMC Flicks, you do not have a system that is capable of playing streaming Netflix or you are missing needed components. Click install on the following window and the add-on will be automatically downloaded and installed in your system. Configure XBMC Flicks Allow Access to Netflix.