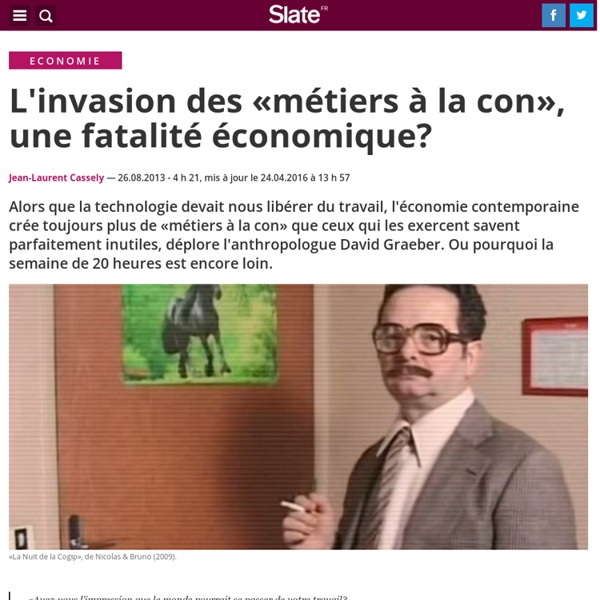 On the Phenomenon of Bullshit Jobs Ever had the feeling that your job might be made up? That the world would keep on turning if you weren’t doing that thing you do 9-5? David Graeber explored the phenomenon of bullshit jobs for our recent summer issue – everyone who’s employed should read carefully… On the Phenomenon of Bullshit Jobs by David Graeber. In the year 1930, John Maynard Keynes predicted that, by century’s end, technology would have advanced sufficiently that countries like Great Britain or the United States would have achieved a 15-hour work week.

Cut the bullshit: organizations with no hierarchy don’t exist Do completely horizontal organizations truly exist? Fueled by growing excitement about self-management, bossless leadership and new governance models such as Holacracy, I increasingly hear large claims about the potential of “flat organizations”, which are being used as synonymous to “having no hierarchy”. I often wonder whether I am reading correctly: Organizations with no hierarchy at all, with real live people in them? I feel like there has been a misunderstanding here. 3 Business Lessons from "The Wolf of Wall Street" — Faisal Butt Charm and the gift of a persuasive turn of phrase can get you almost anywhere. These skills can land people jobs they otherwise would never have gotten. They can get people elected to government through the power of personality. And, once mastered, these skills can have you perceived by your teams as mesmerizing and inspiring. One character that encapsulates these traits is Jordan Belfort (Di Caprio) in Martin Scorsese's latest movie The Wolf of Wall Street.

The Silver Lining Of Anti-Globalism Might Be The Creation Of A True Digital Economy The folks at Davos this week are trying to behave as if everything is normal. Sure, England is Brexiting from Europe and the United States appears to be retreating from the global stage altogether. But somehow the word from Switzerland is that a mix of the right interest rates, investment strategies, and business optimism will keep free trade and globalization on course and safe from this boorish surge of populism. They’re missing the point. How To Eliminate Organizational Debt – The Ready Debt has been around for thousands of years. You borrow money. The lender charges interest until you pay the money back. It’s simple. More recently, the software development community coined a term for another kind of debt: technical debt.

David Graeber: ‘So many people spend their working lives doing jobs they think are unnecessary’ A few years ago David Graeber’s mother had a series of strokes. Social workers advised him that, in order to pay for the home care she needed, he should apply for Medicaid, the US government health insurance programme for people on low incomes. So he did, only to be sucked into a vortex of form filling and humiliation familiar to anyone who’s ever been embroiled in bureaucratic procedures. At one point, the application was held up because someone at the Department of Motor Vehicles had put down his given name as “Daid”; at another, because someone at Verizon had spelled his surname “Grueber”.