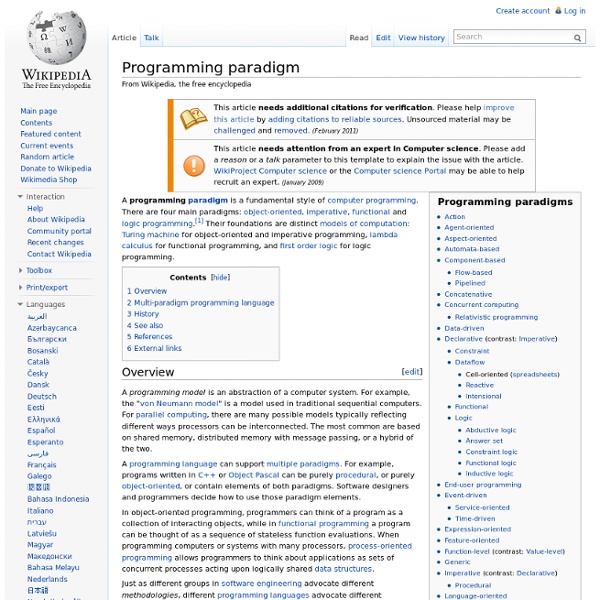 Prolog Prolog is a general purpose logic programming language associated with artificial intelligence and computational linguistics.[1][2][3] Prolog has its roots in first-order logic, a formal logic, and unlike many other programming languages, Prolog is declarative: the program logic is expressed in terms of relations, represented as facts and rules. A computation is initiated by running a query over these relations.[4] The language was first conceived by a group around Alain Colmerauer in Marseille, France, in the early 1970s and the first Prolog system was developed in 1972 by Colmerauer with Philippe Roussel.[5][6] Prolog was one of the first logic programming languages,[7] and remains the most popular among such languages today, with many free and commercial implementations available. Prolog is well-suited for specific tasks that benefit from rule-based logical queries such as databases searching, voice control systems, and template filling. §Syntax and semantics[edit] §Data types[edit] ? ? ? ?

Bionics Bionics (also known as bionical creativity engineering) is the application of biological methods and systems found in nature to the study and design of engineering systems and modern technology.[citation needed] The transfer of technology between lifeforms and manufactures is, according to proponents of bionic technology, desirable because evolutionary pressure typically forces living organisms, including fauna and flora, to become highly optimized and efficient. Ekso Bionics is currently developing and manufacturing intelligently powered exoskeleton bionic devices that can be strapped on as wearable robots to enhance the strength, mobility, and endurance of soldiers and paraplegics. The term "biomimetic" is preferred when reference is made to chemical reactions. Examples of bionics in engineering include the hulls of boats imitating the thick skin of dolphins; sonar, radar, and medical ultrasound imaging imitating the echolocation of bats. History[edit] Methods[edit] Examples[edit]

Cybernetics Cybernetics is a transdisciplinary[1] approach for exploring regulatory systems, their structures, constraints, and possibilities. Cybernetics is relevant to the study of systems, such as mechanical, physical, biological, cognitive, and social systems. Cybernetics is applicable when a system being analyzed incorporates a closed signaling loop; that is, where action by the system generates some change in its environment and that change is reflected in that system in some manner (feedback) that triggers a system change, originally referred to as a "circular causal" relationship. Some say this is necessary to a cybernetic perspective. Concepts studied by cyberneticists (or, as some prefer, cyberneticians) include, but are not limited to: learning, cognition, adaptation, social control, emergence, communication, efficiency, efficacy, and connectivity. Norbert Wiener defined cybernetics in 1948 as "the scientific study of control and communication in the animal and the machine History[edit]