The Secret to Life in 2 Words 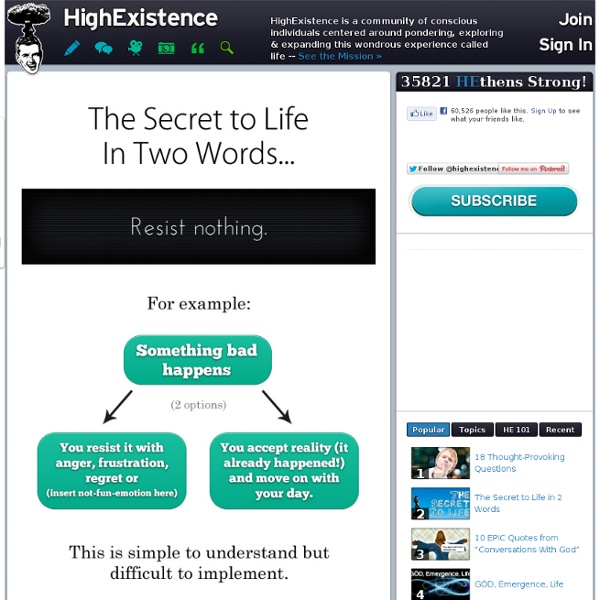 25 Great Quotes to Inspire and Brighten Your Day Here’s a collection of great quotes by some of the most inspirational men and women that ever walked this earth. Hopefully you’ll find them inspirational in some way. If you do like them and find them helpful, check out our similar posts by visiting the links listed below. We have created over 20+ of these galleries, so there is lots more to be seen. Also, be sure to inspire your friends, family and coworkers by sharing some great quotes with them. More popular quotations: – 25 Inspirational Quotes – Great quotes to ponder upon

Tough Choices: The Science Behind Making The Right Call Our lives are filled with one decision after another. Many are trivial but every now and then, a biggie comes along, one where you just know that you’re about to irreversibly shape your own future. The bad news is our decision-making is hampered by the fog of human irrationality. 10 EPIC Quotes from “Conversations With God” “Conversations With God: An Uncommon Dialogue” by Neal Walsh is one of my favorite books of all time, hands down. It is written from the point of view of god (but it’s not religion, so don’t scoff quite yet) telling man how he should live his life. I like to think of it as god’s hypothetical edits to the incredibly skewed, modern interpretation of the ‘The Bible.’

Why Your Vision Must Be Grounded in Reality Whether you realize it or not, you're on a path. You can look back and see exactly how you got to where you stand today. The path ahead is far more nebulous, of course, but it's still a path. Your actions and decisions help to define it, as do all sorts of factors both in and out of your control. If you think of your path as a physical entity, you can easily see that it has certain properties.

Study a person character using his/her body Language in almost any situation Here are some great techniques to Read Body Language to Reveal the Underlying Truth in Almost Any Situation. You've likely heard that body language accounts for up to 55% of how we communicate, but reading non-verbal cues isn't just about broad strokes. The same gesture can indicate a number of different things depending on context. In this post, we're going to take a look at three common situations in which non-verbal cues are especially important—detecting lies, going on a date, and interviewing for a job—then explain how to interpret body language more accurately so that you can read between the lines when a person's words aren't necessarily conveying the way that they honestly feel. We lie a lot. When having a conversation with a stranger, chances are we'll lie in the first ten minutes.

You’ve Got Plenty Of Time Yes, you do. I’ve caught myself whispering this in my own ears frequently during the last few days. And it worked. It worked because it is true, despite how everything seems to indicate just the opposite. Let me explain. 4 Key Ways to Become a Transformational Thinker and Get What You Want Out of Life Recently, I decided that I really wanted to get back into the swing of playing tennis (pun intended), and up my game so that I can play more competitively (instead of swinging at the air and sending fly balls across the net like I tend to do). For round-robin tournaments and tennis leagues, I knew that I really need to be playing at a 3.5-ranking level in order to participate. The second I set that ranking as the goal, I found myself having thoughts like "In the past you've taken lessons and didn't really improve very much," and, "At your age, it's too late to get into tennis," and, "What if I take all these lessons and invest all this money and I still suck at tennis?" Despite all of the negative ammunition I was pumping myself with, I signed up for lessons, and I'm having so much fun that I can't believe I even considered not going for it. I'm not a 3.5-level player yet, but the goal is in sight and I'm on my way.

Six Habits of Highly Empathic People If you think you’re hearing the word “empathy” everywhere, you’re right. It’s now on the lips of scientists and business leaders, education experts and political activists. But there is a vital question that few people ask: How can I expand my own empathic potential? Empathy is not just a way to extend the boundaries of your moral universe. How Not to Be Offended Editor’s note: This post was written by Shemsi Prinzivalli. There is an ancient and well-kept secret to happiness which the Great Ones have known for centuries. They rarely talk about it, but they use it all the time, and it is fundamental to good mental health. This secret is called The Fine Art of Not Being Offended.

12 Tough Truths that Help You Grow As you look back on your life, you will often realize that many of the times you thought you were being rejected from something good, you were in fact being redirected to something better. You can’t control everything. Sometimes you just need to relax and have faith that things will work out.