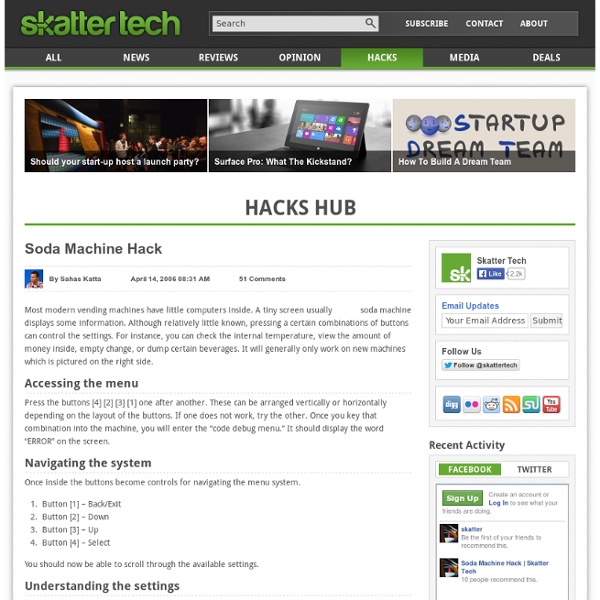 Most modern vending machines have little computers inside. A tiny screen usually displays some information. Although relatively little known, pressing a certain combinations of buttons can control the settings. For instance, you can check the internal temperature, view the amount of money inside, empty change, or dump certain beverages. It will generally only work on new machines which is pictured on the right side. Press the buttons [4] [2] [3] [1] one after another. Once inside the buttons become controls for navigating the menu system. Button [1] – Back/ExitButton [2] – DownButton [3] – UpButton [4] – Select You should now be able to scroll through the available settings. Here are the descriptions of some of the settings you may run into: Pressing the coin return or back button also exits out of the setting menus. Although access to those settings is usually enabled, it is sometimes locked down by the owner or maintenance. CPO – Coin payment mode dumps coins out of the machine.

MAIN - Crack a Wi-Fi Network's WEP Password with BackTrack, the Fancy Video Version - Lifehacker @Thomas Wrobel: Sadly, it is important to secure your wireless. While I'd consider it no big deal for others to leech some bandwidth for email or browsing, if they use it for piracy and get caught, you're liable. @Thomas Wrobel: You are forgetting that you can be punished for what people do with your connection. @Thomas Wrobel: Its not really just that. People can use your internet, do bad things and because it's through your router it would most likely trace back to you. Or too many people can hop on your connection and make your connection almost too slow (that one happened to me before I turned on wireless security.) @Thomas Wrobel: Your biggest protection against being hacked is your router. Also, someone on the same network can set up attacks against encrypted transmissions.

Easy Single Serving Dessert Recipes Single-Serving Peanut Turtle Blondies David Bowers This rich and buttery blondie, topped with so many good things, can be ready in less than three minutes. Single-Serving Triple-Chocolate Brownie Made in a mug or ramekin, this single-serving brownie will satisfy the strongest chocolate craving. Single-Serving Oreo Cheesecake Love cheesecake but don’t want an entire 12-serving cake on your hands? Single-Serving Mini Strawberry Shortcake If you wanted strawberry shortcake in a hurry, you could, of course, buy a package of those little yellow cakes at the supermarket and just dress one for yourself. Single-Serving Butterscotch Pudding Skip the boxed mix – there’s no tradeoff of quality for speed in this luxurious pudding recipe. Single-Serving Monkey Bread Lots of speedy monkey bread recipes call for a roll of canned biscuits from the supermarket’s refrigerator case. Single-Serving Cranberry-Apple Crumble How can you make a fruit crumble in the microwave? Single-Serving Mini Lemon Meringue Pie

How to use Google for Hacking. | Arrow Webzine - StumbleUpon Google serves almost 80 percent of all search queries on the Internet, proving itself as the most popular search engine. However Google makes it possible to reach not only the publicly available information resources, but also gives access to some of the most confidential information that should never have been revealed. In this post I will show how to use Google for exploiting security vulnerabilities within websites. The following are some of the hacks that can be accomplished using Google. 1. Hacking Security Cameras There exists many security cameras used for monitoring places like parking lots, college campus, road traffic etc. which can be hacked using Google so that you can view the images captured by those cameras in real time. inurl:”viewerframe? Click on any of the search results (Top 5 recommended) and you will gain access to the live camera which has full controls. you now have access to the Live cameras which work in real-time. intitle:”Live View / – AXIS” 2. 3. “? 4.

The Complete Guide to Turning Your Video Game Console Into a Living Room Media Center Yeah, the whole XBox Live Gold thing is pretty dreadful. It's one of the reasons I got rid of my XBox. To me, it would be like buying a Microsoft refrigerator that doesn't do anything a normal fridge can't. I have to pay for the electricity to run the fridge, I also have to pay for the food to stock it. But every time I want to open that fridge to get some food out or put some in, I must first pay Microsoft to do so. You know hulu, netflix and the like all aren't free, right? If you're just here trolling about xbox live, well, some of are in the 1% and can afford the 50 dollars a year. Unlike some others, I'm not in the 1% and I hate having to pay for the ability to use the OTHER services I pay for on Xbox. I only just started a Gold account for my son so he would be able to play Minecraft with his friends.

How to Crack the Account Password on Any Operating System - Joe Tech - StumbleUpon This guest post was written by Blair Mathis from LaptopLogic.com – your premier source for the latest laptop software news and best laptop accessories. Computer passwords are like locks on doors – they keep honest people honest. If someone wishes to gain access to your laptop or computer, a simple login password will not stop them. Are you curious how easy it is for someone to gain access to your computer? Windows Windows is still the most popular operating system, and the method used to discover the login password is the easiest. Simply download the Ophcrack ISO and burn it to a CD (or load it onto a USB drive via UNetbootin). The computer will restart and Ophcrack will be loaded. Mac The second most popular operating system, OS X is no safer when it comes to password cracking then Windows. The easiest method would be to use Ophcrack on this, also, as it works with Mac and Linux in addition to Windows. If the Mac runs OS X 10.4, then you only need the installation CD. fsck -fy dscl .

15 Movies from Your Childhood to Rewatch with Your Kids Watching movies with your kids is a great way to bond, not to mention introduce them to some of your favorite and most beloved films from when you were their age. It’s a win-win: they get the joy of watching something they've never seen before while you can bask in a nice dose of nostalgia. Here are 15 movies we loved when we were younger that we'd eagerly rewatch with our own children. 15. A fun twist on the well-known Peter Pan story, Hook explores what would happen if the boy who never grew up actually did. 14. This movie is a handy little lesson about the importance of looking after your siblings. 13. Your kids will get a kick out of this monster mashup. 12. The original movie starring Gene Wilder is a little on the trippy side, but kids will enjoy seeing the magical wonders of Willy Wonka's chocolate factory. 11. Every kid has fantasized about having the house all to himself so he can eat whatever he wants and watch countless hours of television. 10. 9. 8. 7. 6. 5. 4. 3. 2. 1.

How to gain access to system account the most powerful account in Windows.... - StumbleUpon There is an account in Microsoft Windows that is more powerful than the Administrator account in Windows Operating Systems. That account is called System account it is similar to the root OR super user in the Linux/Unix world . I will show you how to access this system account in this article. You can use this facility for removing programs that are causing problems to your system, malware etc. Introduction If you look at the task manager (which can be launched by pressing [CTRL]+[ALT]+[DEL]) you will see some processes that are running with System level privileges. System is the highest account in Windows (like root),You can be a super power user by accessing the system account (even while you are logged in as a restricted user) Note: Accessing system account may cause serious problems. Local system differs from an administrator account in that it has full control of the operating system, similar to root on a Unix machine. Check the name of the account you’ve logged into (Click start.