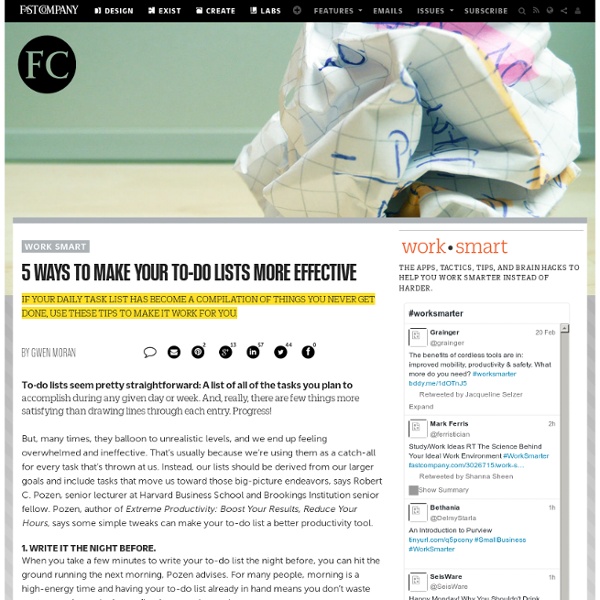 To-do lists seem pretty straightforward: A list of all of the tasks you plan to accomplish during any given day or week. And, really, there are few things more satisfying than drawing lines through each entry. Progress! But, many times, they balloon to unrealistic levels, and we end up feeling overwhelmed and ineffective. 1. When you take a few minutes to write your to-do list the night before, you can hit the ground running the next morning, Pozen advises. 2. Everything that goes on your daily to-do list should fit two criteria: It should be something important that you need to do--versus that which doesn’t really need to be done or which can be delegated to someone else--and something that needs to be done on that day. “When people don’t take control, they go through their days passively. 3. Whether it’s five minutes or two hours, include an estimate of how long it will take to complete, recommends Omar Kilani, cofounder of popular to-do list app Remember The Milk. 4. 5.

8 Things Everybody Ought to Know About Concentrating “Music helps me concentrate,” Mike said to me glancing briefly over his shoulder. Mike was in his room writing a paper for his U.S. History class. On his desk next to his computer sat crunched Red Bulls, empty Gatorade bottles, some extra pocket change and scattered pieces of paper. Mike made a shift about every thirty seconds between all of the above. Do you know a person like this? The Science Behind Concentration In the above account, Mike’s obviously stuck in a routine that many of us may have found ourselves in, yet in the moment we feel it’s almost an impossible routine to get out of. When we constantly multitask to get things done, we’re not multitasking, we’re rapidly shifting our attention. Phase 1: Blood Rush Alert When Mike decides to start writing his History essay, blood rushes to his anterior prefrontal cortex. Phase 2: Find and Execute Phase 3: Disengagement While in this state, Mike then hears an email notification. The process repeats itself sequentially. 1. 2. 3. 4. 5. 6.

5 More Unexpected Ways to Work Smarter, Not Harder I wrote a post recently about ways that you can work smarter, not harder. As I worked through the list of techniques I’d collected, the post became so long that I had to split it in half. Here are even more suggestions to help you make your day more productive without putting in extra hours. 1. Limit your to-do list I’ve written about the history of the to-do list before, and how to write a great one. One way to do this is by choosing 1–3 Most Important Tasks (MITs). “Do your MITs first thing in the morning, either at home or when you first get to work. The rest of your to-do list can be filled up with minor tasks that you’d like to do, so long as you’ve prioritized 1–3 MITs. Plan the night before Another to-do list tip that can reduce work anxiety is to write out your to-do list the night before. Focus just on the present day My most recent and favorite change to my to-do list has been separating my “today” list from a master list of everything I need to get done. 2. 3. 4. 5.

This 15-Minute Activity Will Make You More Successful At Work The Exact Amount Of Time You Should Work Every Day Editor's Note: This is one of the most-read leadership articles of 2014. Click here to see the full list. You know that taking frequent breaks is good for your productivity, focus, and creativity, but you just never seem to get around to it. You feel stressed and exhausted when you hammer away at your keyboard all day, and the evidence is everywhere. "All efforts to control behavior, to perform and to focus draw on that pool of psychological energy. Recently, the Draugiem Group, a social networking company, added to this growing body of research. "Turns out, the secret to retaining the highest level of productivity over the span of a workday is not working longer—but working smarter with frequent breaks," wrote Julia Gifford in The Muse when she posted the study’s results. The Draugiem Group’s study highlights what researchers have been saying for years—that our brains simply weren’t built to focus for eight-full hours a day. Schedule breaks into your daily calendar.

30-Second Productivity Strategies Half a minute is all it takes to make each day more productive. 1. Take 30 seconds to set the stage for awesome success. Here's how: Before you start doing something, answer the question, "What can I do to make this awesome?" That's basically what Mike Williams of the David Allen Company (the Getting Things Done folks) asked me. When I started to interview him, he stopped me and said, "What would make this call wildly successful for you?" At first, it sounded cheesy. Keep in mind this applies just as much to your personal life, too. Don't just move blindly on to the next task. Answer that question, and whatever you do, you will do a lot better. 2. Unfortunately, all too often you forget what happened. Don't. Then you will remember what's important--and be able to act on what's important. 3. That's a shame, because meetings involve people--and that means there's a lot to think about ahead of time. Terrible meetings are all talk and no action. 4. Feeling stressed? 5. 6. 7.

5 Routines To Clear Mental Clutter That smartphone in your pocket? It’s nearly doubling the amount of time you spend working. A 2013 survey by the Center for Creative Leadership found that the typical smartphone-carrying professional interacts with work an average of 72 hours a week. No wonder we’re all so stressed out. "Year after year, people complain of being more overwhelmed than they were the year before," says Scott Eblin, author of Overworked and Overwhelmed: The Mindfulness Alternative "It’s an epidemic that needs to be addressed." It started during the financial crisis of 2008, says Eblin. For Eblin, an executive coach and president of the Eblin Group, the impact of stress hit home in 2009 when he was diagnosed with multiple sclerosis. "Managing MS is about managing stress," he says. The entry point to mindfulness is awareness, but Eblin says the endless amount of distractions in today’s world makes it difficult. The opposite of fight or flight is "rest and digest." 1. 2. What was supposed to happen? 3. 4. 5.

Stanford Literature Review What is it? A critical literature review is one of the most important activities in the process of research and is usually included as part of the introduction to a research report or thesis. The aim of a literature review is to show that the writer insightfully evaluated the existing published literature on a particular topic. A good literature review should do the following: Define the scope of the problem Place the current study in a historical perspective Show the relationship between previous research and the current research thesis Avoid unnecessary duplication Evaluate different research methodologies and emphasize key studies Compare and contrast different research findings on a topic while grouping together authors with similar conclusions and noting areas in which authors are in disagreement Report gaps in the previous research and how the current study can add to the literature in general Conclude by summarizing what the literature says How does one begin? C.

How do I... The Memory Palace System - The Minimalist Blog | Hobbies | Finance | Fitness | Health | Business As illustrated by the image above, memory is quite complex, but the more tools we have to harness our thoughts and power of recall, the simpler it becomes. I have been using the Memory Palace System for a few months now, but only for little things like grocery and topic lists (lists of points I want to make in a conversation or debate). However, recently I’ve been using it to memorize poetry, passages of the Bible, and other important documents, and have found that it has enabled me to memorize passages in less than half of the time it would normally. So a poem that would take 30 minutes to add to my mid/long- term memory now takes less than 15 minutes. There are, however, both advantages and disadvantages to the technique that we’ll discuss later. The History of the Memory Palace The memory palace, also known as “the Method of Loci”, is the oldest mnemonic technique dating back to the ancient civilization of Rome. Creating the Mind Palace A Shopping List Example The List Exercise Completed!

The Brain-Based Secret to Personal Productivity By now, you've probably already broken most of your New Year's resolutions. You're not alone: Only about 8 percent of those who make them keep them. But it may not be that you'll never lose weight or learn a foreign language. If you aren't being productive or if you feel off track, it could simply be because you haven't set yourself up for success in a way that suits your individuality. Take a typical New Year's resolution like running. Let's apply this to work. In my work, we've uncovered four ways of thinking that every person exhibits. Here's your challenge: Find which way of thinking (or what combination of ways) fits you. Structural. Analytical. Social. Conceptual. In all four scenarios, the goal is the same: getting things done. Imagine Jack vowing to "be a little less rigid this year, maybe a little more like Natalie." Behavioral preferences, such as expressiveness, assertiveness, and flexibility, will also play a key role in your productivity this year.