15 Ways to MINDFUCK Yourself 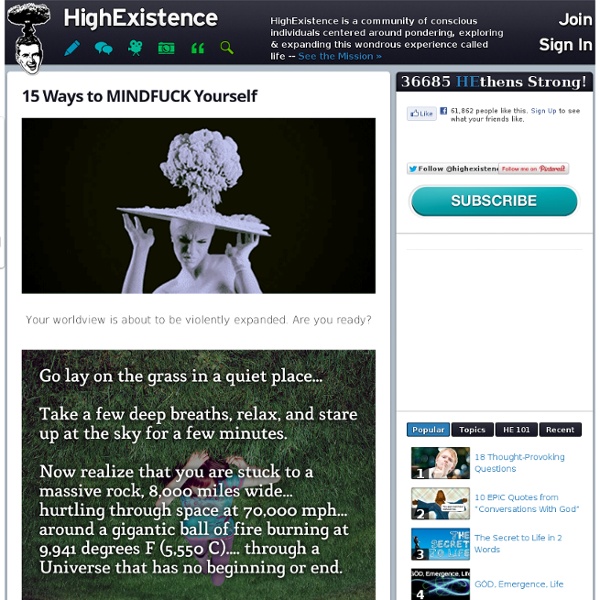 7Life System: The Simple Structure That Will Change Your Life Today I have been given the honor of sharing with you a simple system that I have found to be an excellent way of structuring goals into an achievable format. It’s easy to follow, doesn’t take long to implement and is flexible enough to work around your life. If you keep an open mind, commit to trying the system for a few weeks and are diligent in its application, I am confident it will help you greatly… it might even change your life. Learning How to Eat Elephants We have all, at some point, fallen prey to “New Years Resolution” death bug, where the ambitious goals we set in January are already a distance memory by February. They say if you want to eat an elephant, break it down into small chucks. What Will This System Do For You? Many of you have no doubt heard of Pareto’s Law, which states that “20% of all input will account for 80% of all output” This system ensures the individual reduces the time wasted on things that are not important or core to their dreams and goals in life.

Stores Open On Thanksgiving 2013: Walmart, Target And Other Store Hours On Turkey Day While federal government offices, schools, financial markets and post offices will be closed for the national holiday on Thursday, Nov. 28, select retailers have chosen to open to get ahead of the competition with doorbuster specials on turkey day. Stores including Kohl’s, J.C. Penney and Macy’s announced their hours for Thanksgiving Day last week as part of a strategy to beat out competitors for Black Friday, the shopping event of the season. Many stores are opening earlier than ever in the hopes of being the first, and final, destination for shoppers this holiday season. Walmart decided it would open its stores two hours earlier than last year at 6 p.m. on Thanksgiving, while Target chose to open one hour earlier at 8 p.m. Their competitor, Kmart, will open at 6 a.m. and remain open for 41 hours straight through Black Friday. Here's a list of some stores that will be open on Thanksgiving Day 2013, starting with the earliest, with links to their sales ads. Kmart: 6 a.m. CVS: 9 a.m.

Not Second Sight, But First Sight October 13, 2012 “First Sight [theory] brings in what is popularly called the ‘paranormal.’ It is different from previous ways of thinking about the paranormal in that it shows that our use of extrasensory information is actually normal and helpful, although unconscious. No ‘para’ is needed anymore. From HuffingtonPost.com by James Carpenter, Ph.D., Clinical psychologist; research parapsychologist; author There is a new theory about your mind -- about where your decisions and experiences come from before you are aware of them. Parts of this theory are familiar. A difference about this theory, called "First Sight," is that it assumes that a much bigger domain of unconscious information stands behind experience. First Sight brings in what is popularly called the "paranormal." I am the author of this theory, and while I have mainly had a career as a clinical and research psychologist, I have also had an abiding interest in ESP. Experiences like my mother's are not particularly rare.

The Brow Chakra | Bliss Returned The Brow Chakra, the center of our “Third Eye”, is our connection to the wisdom the universe has to offer. Through the experiences we have, we gain knowledge, and through that knowledge we gain perspective. It enables us to separate the real from the imagined, the vital from the unimportant. It allows us to become intuitive, optimistic, and knowing.Ajna in Sanskrit, the Brow Chakra is located between our eyebrows on the forehead. It is said that the Brow Chakra resonates at a higher frequency than your other chakras, and can be activated through the key of Ajna. On the flip side, someone with a closed brow chakra may have problems with visualization or any type of imagination. When out of balance with Ajna, a person may be more forgetful, doubtful, or be an obsessive worrier and afraid of success. Opening your Brow Chakra allows you to enlighten every aspect of your life by understanding the relationship between the physical, emotional, and intellectual. Feeding Your Brow Chakra

How to Open Your Spiritual Chakras: 9 Steps User Reviewed Community Q&A According to Hindu and/or Buddhist belief, chakras are vast (yet confined) pools of energy in our bodies which govern our psychological qualities. There are said to be seven main chakras in all; four in our upper body, which govern our mental properties, and three in the lower body, which govern our instinctual properties. The Muladhara (root) chakra. Read on to discover the art of becoming aware of the chakras, as well as a very reliable technique designed to open them. Steps <img alt="Image titled Open Your Spiritual Chakras Step 1" src=" width="728" height="546" class="whcdn" onload="WH.performance.clearMarks('image1_rendered'); WH.performance.mark('image1_rendered');">1Understand that if you are opening your chakras, there is no need to try to make over-active chakras less active. Community Q&A Ask a Question Video Tips

InterObjectif.Net Cheap things to do in NYC: Your guide to bargains in Gotham Cheap things to do in NYC In case you haven’t heard, New York is expensive. Crazy, right? But great deals are popping up all the time. And that’s where we, your trusty pals, come in. Lucid Dreaming/Using Dream stabilization[edit] Once you are able to dream lucidly, you may find that it is difficult to stay in the dream; for example, you may wake instantly or the dream may start “fading” which is characterized by loss or degradation of any of the senses, especially vision. Alternatively, a new lucid dreamer could easily forget that they are in a dream, as a result of the shock of the sensation. Don't worry if you wake immediately after becoming lucid. You can avoid more gradual fadings by stimulating your senses. Ideally you should be able to use the techniques below to stabilize your dream before it starts to fade (or “black out”). If you still can’t stabilize your dream, you may decide to try and wake up with the aim of remembering your dream as accurately as possible while its still fresh in your mind. Hand Touching[edit] Rub your hands together and concentrate on the rubbing. Spinning[edit] You spin around in your dream much as you would if you suddenly want to feel dizzy in real life.

More Lateral Thinking Puzzles Here's to the crazy ones. The misfits. The rebels. The following questions will test your ability to think laterally. Name an ancient invention still in use in most parts of the world today that allows people to see through walls. How can you throw a ball as hard as you can, and make it stop and return to you, without hitting anything and with nothing attached to it? Score Check your answers below. For more examples of lateral thinking in jobhunting see our Creative Careers Search page Also see our First lateral thinking test and our Riddles test Also see the logic puzzle at www.kent.ac.uk/careers/sk/problem-solving-skills.htm#logic Answers The window. None - it's a pear tree. Back to our other skills pages

Get Anyone to Like You – Instantly – Guaranteed Get anyone to like you - Instantly - Guaranteed If you want people to like you, make them feel good about themselves. This golden rule of friendship works every time - guaranteed! The principle is straightforward. If I meet you and make you feel good about yourself, you will like me and seek every opportunity to see me again to reconstitute the same good feeling you felt the first time we met. The simple communication techniques that follow will help you keep the focus of the conversation on the person you are talking to and make them feel good about themselves. The Big Three Our brains continually scan the environment for friend or foe signals. Eyebrow Flash The eyebrow flash is a quick up and down movement of the eyebrows. Head Tilt The head tilt is a slight tilt of the head to one side or the other. Smile A smile sends the message "I like you." Empathic Statements Empathic statements keep the focus on the other person. Example 1 George : I've been really busy this week. Example 2 Flattery