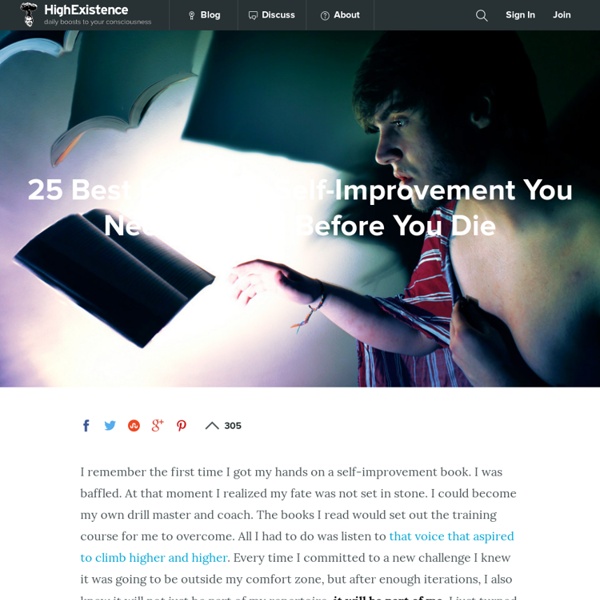 I remember the first time I got my hands on a self-improvement book. I was baffled. At that moment I realized my fate was not set in stone. I could become my own drill master and coach. The books I read would set out the training course for me to overcome. All I had to do was listen to that voice that aspired to climb higher and higher. These are affiliate links to Amazon.com, using these will support HighExistence, thank you. 1. This book is a masterpiece, and unlike most self-improvement books, this one targets an infinite array of areas in which you can, and ultimately must, improve. 2. Perhaps it is the fact that randomness played such a significant role in my years as a poker player that I find this book utterly important. Not enough time? 3. I read this book in a time where I thought power was something I should attain. 4. The title of this book doesn’t capture it all. Not enough time? 5. 6. We all know how that destructive downward spiral feels. 7. Not enough time? 8. 9. 10. 11.

25 Psychological Life Hacks that Will Help You Gain the Advantage in Social Situations Social situations are among the most important in our lives. Yet, there is a huge chance that you are oblivious to the plethora of unwritten social rules that structure everybody’s behaviour. Failing to comply to these cultural imprints can cause irreversible damage. Just following them blindly will not get you ahead. The 25 Best Self-Improvement Books To Read Before You Turn 25 It’s fair to say that self-improvement books get a bit of a bad reputation, and by all means if you don’t agree with the concept you don’t have to read any of them. However, if you are looking to read something that could improve your life Martijn Schirp of High Existence has created a list of the 25 best self-improvement books to read before you turn 25: I remember the first time I got my hands on a self-improvement book.

Snowflakes and the Illumanati: How Chaos Theory Debunks The New World Order Place yourself in a completely empty space, pitch black; no indication of walls, ceilings, or floors. Suddenly, a mass appears before you, somewhat cloudy, and vibrating to a resonance you can’t explain with words. You would never guess, but it’s a water molecule. Soon, another appears – they collide and seem to lock in orientation. More appear, streaming in from all sides and a structure begins to expand – at first only containing a few, then dozens, then hundreds, thousand.

The Internet has destroyed human civilization! America’s greatest writer finally weighs in “When, in the course of human events, mankind is free but everywhere he is in chains, let us pause for a moment to think about the fact that the Internet has destroyed human civilization. And by human civilization, I mean writers; and by writers, I mean ‘writers I know,’ and by writers I know, I mean ‘writers I know who I have slept with,’ and by writers I have slept with, I mean, ‘writers who I want to sleep with.’ I believe it was Henry James (or, as he was known in France, Henri Jacques) who wrote, ‘without the humanities, the Princess Cassimassima would have suffered from an excessively monochromatic pulchitrude.’ Where have all the essays gone? Long time passing.” I put down my quill, which I always use when writing criticism of importance, lean back in my chair, and sigh.

New Year, new you: what are the best self-help books? Great for emotional and career dilemmas. Might feel glib if you have serious emotional problems. Who wrote it? Susan Jeffers, aka the “Queen of Self-Help”. What does she know? 100 Websites You Should Know and Use (updated!) Entertainment Meet David Peterson, who developed Dothraki for Game of Thrones There are seven different words in Dothraki for striking another person with a sword. Among them: “hliziﬁkh,” a wild but powerful strike; “hrakkarikh,”a quick and accurate strike; and “gezrikh,” a fake-out or decoy strike. But you won’t find these words in George R. R.

The supreme weirdness of Miranda July: How her debut novel gives “effortless” new meaning The narrator of Miranda July’s debut novel, “The First Bad Man” is a strange, ostensibly mousy middle-aged woman named Cheryl. Cheryl works at a nonprofit that teaches self-defense to women. She attends “color therapy” for a chronic globus hystericus (lump in the throat). She pines for a baby she fell in love with when she was nine, a baby whose soul is now reincarnated in various other babies Cheryl sees around town. She lusts for an elderly man who in turn lusts for a 16-year-old girl, and who texts Cheryl for permission to commit increasingly felonious acts with her.

Aria E. Appleford I happen to disagree with this statement. This is not a criticism on the people who posted the poster from Facebook – Changeyourthoughtstoday, or whoever made the poster, or even Iyanla Vanzant. It is a criticism of what the quote is saying. There is a reason why people can react so viscerally to statements like this, that are most often found with religions. It suggests that we alone are responsible for everything that happens to us.

100 Amazing How-To Sites to Teach Yourself Anything Posted by Site Administrator in Online Learning May 7th, 2009 Learning new skills and expanding your knowledge doesn’t have to cost you an arm and a leg. There are loads of free resources on the Web that can help you find instructional videos, tutorials and classes to learn a wide variety of skills from fixing basic car problems to speaking another language. With 100 sites to choose from, you’re bound to find something here that will help you learn just about anything you could want. General Tutorials These sites offer a wide range of tutorials and videos.