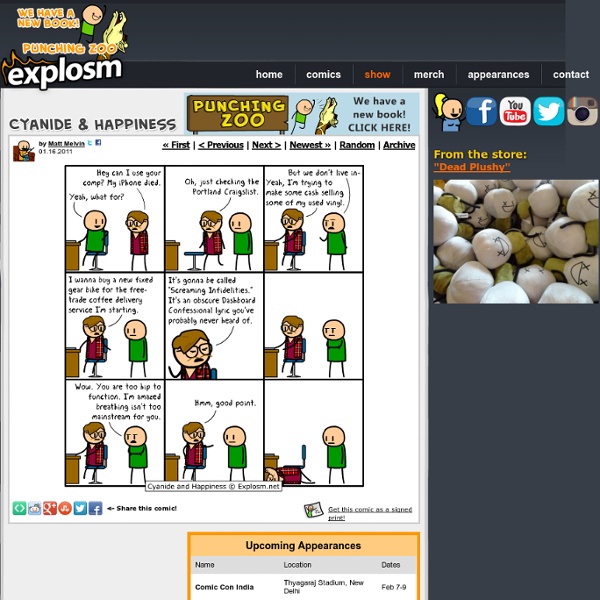 Anti Joke What are Antijokes? Anti Jokes (or Anti Humor) is a type of comedy in which the uses is set up to expect a typical joke setup however the joke ends with such anticlimax that it becomes funny in its own right. The lack of punchline is the punchline. We’ve just released huge update to the iOS app! NEW ANTI-JOKE BOOK! Want more? Game of Life The Game The Game of Life is not your typical computer game. It is a 'cellular automaton', and was invented by Cambridge mathematician John Conway. This game became widely known when it was mentioned in an article published by Scientific American in 1970. playgameoflife.com New developments of this page will continue on playgameoflife.com, currently in beta. playgameoflife.com The Simulation The Rules For a space that is 'populated': Each cell with one or no neighbors dies, as if by solitude. Each cell with four or more neighbors dies, as if by overpopulation. Each cell with two or three neighbors survives. For a space that is 'empty' or 'unpopulated' Each cell with three neighbors becomes populated. The Controls Choose a figure from the pull-down menu or make one yourself by clicking on the cells with a mouse. Development Game of Life is supported by Dotcom-Monitor, LoadView Testing, Web Hosting Buddy, Instructify, Security Guard Training Central, and Driven Coffee Edwin Martin <edwin@bitstorm.org>

Mind Hacks Ten games that make you think about life At the start of this year, we decided to come up with a list of Flash casual games with a philosophical bent. To be honest, we struggled. After days of research, we could only find a handful of games that had the thought-provoking depth we were looking for. Our list (which you can view by clicking here) was therefore only five games long. Fast forward to now, and it is remarkable how much difference a few months can make. Thanks to the work of pioneers like Daniel Benmergui, Gregory Weir and PixelAnte, there is now an abundance of clever arty Flash games to pique our intellects, and as a result creating this follow-up list of games that make you think has been a doddle. In a wonderful twist, it seems it is the Flash gaming space - until now known more for the throwaway nature of its games rather than depth - that is leading the way in this exciting new area of gaming, as we hope the following games prove. 1Immortall The game starts with you crash landing on a planet. 2Loved 5Coma 6Loondon

cognitive fun! Espionage Chasing Game Espionage requires at least two (possibly more) teams of three people each, plus at least one referee. The most unusual part of the game is that the players don't know which team they are on. Teams change with each round. The game is traditionally played at night in a home and the surrounding yard. When a round starts, one or more kids are chosen to be the referees (which can be more fun than being on the teams). Each team has three roles. The mate knows two locations, the meeting place and the goal, but not which is which. The yeoman knows an object (the totem), the password, and the jail(s) of the other team(s). The purpose of the game is to get the totem to the goal. This is a game with many opportunities for winning by deluding the other team into thinking you are part of their team. This is supposed to have created by a secret society with threats to prevent members from telling.

RainyMood.com - Rain makes everything better. Musicovery icotrip – Each day a new (ico)trip Bacolicio.us ~Mmmm, Bacon~ FASHEMATICS!!! Soda Machine Hack Most modern vending machines have little computers inside. A tiny screen usually displays some information. Although relatively little known, pressing a certain combinations of buttons can control the settings. For instance, you can check the internal temperature, view the amount of money inside, empty change, or dump certain beverages. It will generally only work on new machines which is pictured on the right side. Press the buttons [4] [2] [3] [1] one after another. Once inside the buttons become controls for navigating the menu system. Button [1] – Back/ExitButton [2] – DownButton [3] – UpButton [4] – Select You should now be able to scroll through the available settings. Here are the descriptions of some of the settings you may run into: Pressing the coin return or back button also exits out of the setting menus. Although access to those settings is usually enabled, it is sometimes locked down by the owner or maintenance. CPO – Coin payment mode dumps coins out of the machine.

Miegakure: A puzzle-platforming game in four dimensions Miegakure is a platform game where you navigate a four-dimensional world to perform miraculous feats and solve puzzles. Miegakure is a puzzle-platforming game that lets you explore and interact with a four-dimensional world. The fourth dimension in this game works just like the first three: it is a mathematical generalization. Your ability to move in the fourth dimensions in addition to the usual three allows you to perform miraculous feats like seeing inside closed buildings, walking through walls, stealing objects from closed containers, binding two separate rings without breaking them, etc... These actual consequences of the mathematical formulation of 4D space have been thought about for more than a century (in the 1884 novella Flatland for example) but it is the first time anyone can actually perform them, thanks to the video game medium. Our world is three-dimensional: width, depth, and height. In this case the fourth dimension is not time. Is there a demo? Miegakure TRAILER