HTTP is obsolete. It's time for the distributed, permanent web. HTTP is obsolete. It's time for the distributed, permanent web September 8th, 2015 - kyledrake Early this year, the Internet Archive put out a call for a distributed web. We heard them loud and clear. Today I'm making an announcement that begins our long journey to the future of the web. Neocities has collaborated with Protocol Labs to become the first major site to implement IPFS in production. What is IPFS? IPFS is a distributed file system that seeks to connect all computing devices with the same system of files. IPFS is still in the alpha stages of development, so we're calling this an experiment for now. The message I want to send couldn't possibly be more audacious: I strongly believe IPFS is the replacement to HTTP (and many other things), and now's the time to start trying it out. Part 1: What's wrong with HTTP?

It is inconceivable for me to even think about what life would be like without it. I love HTTP, and I always will. HTTP is brittle Tim's NeXT cube is now a museum piece. Code injection: A new low for ISPs. Imagine you’re on the phone with your doctor, discussing a very sensitive and private matter that requires your full attention. 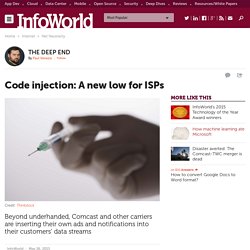 Suddenly in the middle of a sentence, your mobile phone provider injects a recording saying you’ve used 90 percent of your minutes for the month and to press 1 to contact customer service, and repeats the message until you either hit 1 or hit 2 to cancel. Or you’re on a call with a buddy, talking about your favorite sports team.

Suddenly you get several text messages with “special offers” from companies that sell jerseys and other sporting goods. Unconscionable, right? Yet both scenarios play out on the Internet, in various degrees of insidiousness. The first example above happens to an unfortunately large number of U.S. Think about it for a second: Your cable provider is monitoring your traffic and injecting its own code wherever it likes. Comcast Believes Everyone Will Take Advantage of Them for Their TWC Merger - Toolbox for IT Groups. The Times Warner-Comcast merger has been the subject of a lot of discussion. 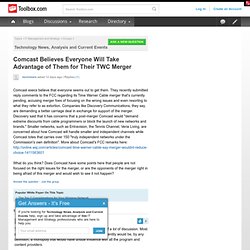 Most of that discussion has focused on the fact that the resulting entity would be, by any definition, a monopoly that would have undue influence with all the program and content providers. Of course, each of the two existing companies is already a monopoly as far as the vast majority of customers are concerned. In a few service areas, customers may have a choice between their cable company and their phone company; in most areas, there's not even that much competition. But the relationships between the "carriers" (the cable companies) and the "channels" (television networks on the video side and web sites on the data side) are a different matter.

When one company controls more than one third of the entire customer base, the providers have very little leverage in terms of pricing. Comcast singled out Netflix for trying to gain undue business leverage. (added emphasis mine). Michael S. The Server Needs To Die To Save The Internet. O we have the Internet we deserve? 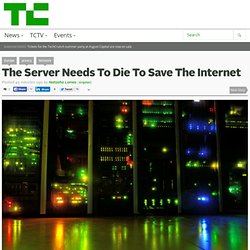 There’s an argument to say that yes, we absolutely do. Given web users’ general reluctance to pay for content. We are of course, paying. Just not with cold hard cash, but with our privacy — as digital business models rely on gathering and selling intel on their users to make the money to pay (the investors who paid) for the free service. Users are also increasingly paying with time and attention, as more ad content — and more adverts masquerading as, infiltrating and degrading content — thrusts its way in front of our eyeballs in ever more insidious ways. The commercialization of the web is the ugly reality of the hidden cost of all the datacenters and servers required to power the Internet. But perhaps there is another, far better way — that benefits individual web users and startup developers alike. No one said this was a small problem with an easy fix. So what exactly is this startup building?

That’s right. And individual developers too. New technique could boost internet speeds tenfold. Researchers at Aalborg University, MIT and Caltech have developed a new mathematically-based technique that can boost internet data speeds by up to 10 times, by making the nodes of a network much smarter and more adaptable. 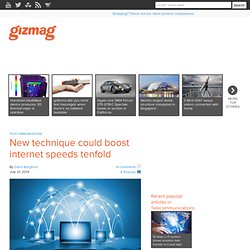 The advance also vastly improves the security of data transmissions, and could find its way into 5G mobile networks, satellite communications and the Internet of Things. View all The problem with TCP/IP Data is sent over the internet in "packets," or small chunks of digital information. The exact format of the packets and the procedure for delivering them to their destination is described by a suite of protocols known as TCP/IP, or the internet protocol suite, designed in the early 70s. Back when it was conceived, the internet protocol suite was a tremendous leap forward that revolutionized our paradigm for transmitting digital information. Network coding – the solution? Researchers Morten Videb and Janus Heide (Photo: Aalborg University) How it works What's next?