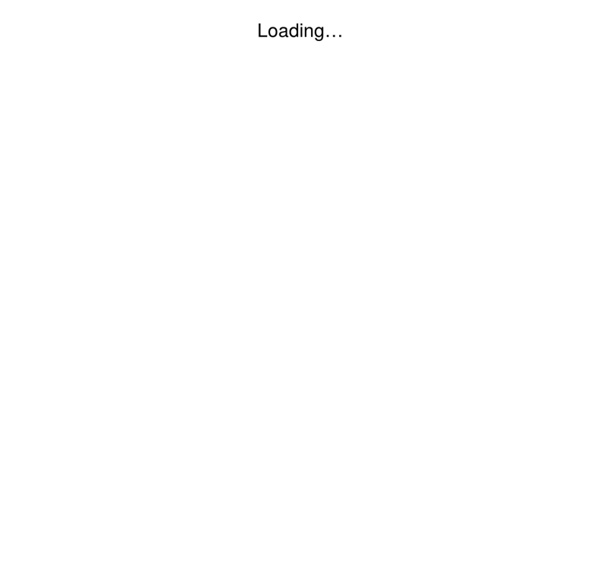 ConceptLink ConceptLink creates visual images for medical concepts. It allows the user to explore concept relationships visually. ConceptLink is also a visual interface for PUBMED (the National Library of Medicine's search engine for the world's largest medical literature database, MEDLINE). It guides the user to construct search queries through concept maps generated instantly from user's queries. Journal / Author Name Estimator (Jane) Insert your title and/or abstract here: (or, click here to search using keywords) Have you recently written a paper, but you're not sure to which journal you should submit it? Or maybe you want to find relevant articles to cite in your paper? Or are you an editor, and do you need to find reviewers for a particular paper? Jane can help!

Bus slogan generator Home page Atheists have started advertising on buses in the UK. Do you want to see your own message on the side of a bus? Well now's your chance. PubViz In short, PubViz is developed to provide the capability of utilizing external knowledge as well as interactive visual query functions for more efficient exploration of the Medline database. The current version has the ability to utilize protein-protein interaction data during Medline search and enable researchers to identify functionally related Medline records not retrievable in existing search engines. It can also utilize the structure relationship of different type of genetic markers including cytobands, microsatellite/STS markers, SNPs and genes derived from human genome assembly and HapMap data for deep search of genetically related Medline records.

The Ultimate Guide to the Invisible Web Search engines are, in a sense, the heartbeat of the internet; “googling” has become a part of everyday speech and is even recognized by Merriam-Webster as a grammatically correct verb. It’s a common misconception, however, that googling a search term will reveal every site out there that addresses your search. In fact, typical search engines like Google, Yahoo, or Bing actually access only a tiny fraction – estimated at 0.03% – of the internet. The sites that traditional searches yield are part of what’s known as the Surface Web, which is comprised of indexed pages that a search engine’s web crawlers are programmed to retrieve. So where’s the rest? The vast majority of the Internet lies in the Deep Web, sometimes referred to as the Invisible Web.

Quertle To find the most focused results, Quertle searches for assertions made by the author(s) that tie all of your search terms together in a meaningful way. Thus, it is best to focus your initial query on the core concepts of interest, such as "what causes B". Then, add additional terms, such as "mice", and dates when you filter the results. Authors and journals should be entered into their own search boxes. Example use this: caffeine treats migraines instead of this: caffeine treats migraines in mice 2009 Smith As you type, automatic suggestions will appear. Oven-roasted Sausage and Sweet Potato If you live in Ireland and are at all interested in food, chances are you’ve heard of Donal Skehan, a rising star on the food scene. At only 23 years old, he’s already been blogging for three years at The Good Mood Food Blog and has published a cookbook. Television appearances include Ireland AM, the RTÉ Afternoon Show and Nationwide in Ireland and Market Kitchen in the UK, where he cooked his mojito chicken. In addition to his blog, he’s also a talented food photographer (he took many of the photos for his book) and writes for Irish Tatler magazine and The Cork News newspaper. Last month, he was in Paris cooking for 700 people at Veilleé Foodstock and returned to Ireland in time to scoop the Best Food/Drink Blog award at the Irish Blog Awards.

MEDIE MEDIE is an intelligent search engine to retrieve biomedical correlations from MEDLINE, based on indexing by Natural Language Processing and Text Mining techniques. You can find abstracts/sentences in MEDLINE by specifying semantics of correlations; for example, "What activates p53" and "What causes colon cancer". Semantic search is to use a semantic query for finding biomedical correlations. Input a subject, a verb, and an object of a concept (or either of them) into a form. Results of the query will be shown in a second. Creator Processing ... Personal $ Svg $20 ✓ Hide email address in source code I've compiled a list of methods to hide email addresses from the page source to minimize visibility against the email harvesting spam bots. Each method has its (dis)advantages, therefore I leave it up to the reader to decide which method suits them the most, as there are many factors. Plain <a href="mailto:foo@bar.baz">foo@bar.baz</a> /* Output on screen */ foo@bar.baz