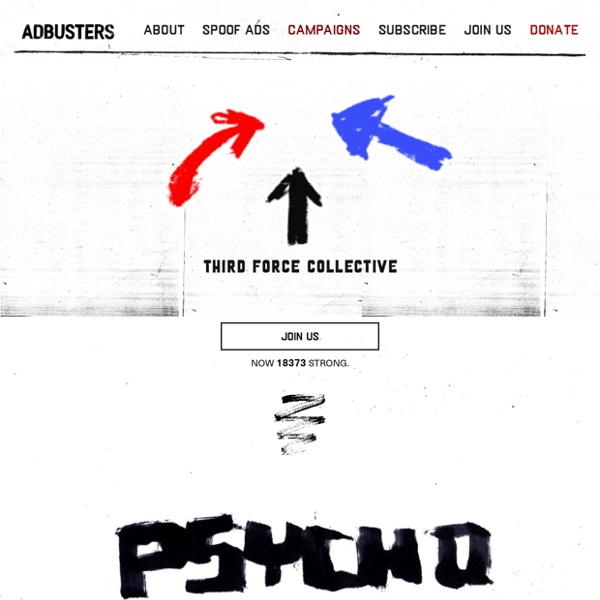 Opinions on Corporate and Brand Identity Work UnderConsideration is a graphic design firm generating its own projects, initiatives, and content while taking on limited client work. Run by Bryony Gomez-Palacio and Armin Vit in Austin, TX. More… products we sell Flaunt: Designing effective, compelling and memorable portfolios of creative work. The Secret Agents of Capitalism Are All Around Us The young people grouped at the end of the bar resemble Gap models. They are facially attractive, in that asymmetrical sort of way, and they wear the new uniform of the Internet cast-aside who still has money to carouse with: tight dark blue jeans, T-shirts a bit too small and hair slightly greased. It's a Wednesday night at a small bar on Manhattan's Lower East Side. Coolest Documentary Films 2010-2014 Share on: 70 total shares Documentaries are unfortunately very often overlooked in favour of more flashier features film. Especially when they don’t have an A-lister doing the voice over. Unless they manage to win big at festivals like Sundance or TIFF, the chances of securing a distribution deal shrink even further. But over the last four years, there has been a whole host of intelligently made, gripping documentary cinema whose subjects vary impressively.

Start Here New to Keeper of the Home? Welcome! We’re so glad you’re here! I know it can be challenging to find your way around a new website. Allow me to show you around a little! First of all, learn about Keeper of the Home and what we’re all about or more about who I am, as well as the other fabulous writers who contribute here. HotHouse head of copy Alan Curson: "The mainstream is dead. Long live the mainstream." Alan Curson, Head of Copy at HotHouse takes a look at the new mainstream and how there are now so many more opportunities to engage consumers. Posters, TV commercials, print ads ... love 'em. In fact, I can't think of many things more satisfying than coming up with a good idea, negotiating the moving goal posts, fighting off the Idea Vampires and Can't Brigades and finally running it. It's not better than sex, but it is pretty good. So I'm not having a go at what used to be, and many people still call, 'the mainstream' (ie TV).

40+ Beautiful Robot Characters Illustration There are lots of cool illustrations that can be found on the net which can be a good basis to get some inspirations. Just like the 50+ Cute and Adorable Monster Characters Illustration that I showcase a days ago, here is another list of some cool illustrations to enhance your ideas. This time it is a 40+ Beautiful Robot Characters Illustration. Small is beautiful – an economic idea that has sadly been forgotten EF Schumacher's Small is Beautiful was the first book on politics I ever read; it was the only book about politics I ever saw my father read or heard him talk about. It arrived in our cottage in rural North Yorkshire as a manifesto from a radical countercultural world with which we had no contact. Re-reading its dense mixture of philosophy, environmentalism and economics, I can't think what I could possibly have understood of it at 13, but in a bid to impress my father I ploughed on to the end. Looking back over the intervening almost four decades, the book's influence has been enormous. "Small is beautiful" was a radical challenge to the 20th century's intoxication with what Schumacher described as "gigantism". For several decades, mass production methods were producing more cheap goods than ever before; the mass media and mass culture opened up new opportunities to a wider audience than ever.

Acherus Grotesque Fonts by Horizon Type Acherus Grotesque by Horizon Type Download Demos Designed by Ufuk Aracıoğlu, Acherus Grotesque is a sans serif font family. Explore Coub Facebook Twitter Tumblr Pinterest Copy link 10 Differences Between Advertising and Public Relations If you're searching for a career or trying to promote your company, you may have questions about advertising vs. public relations. These two industries are very different even though they're commonly confused as being one and the same. The following ten properties just scratch the surface of the many differences between advertising and public relations. 1. Paid Space or Free Coverage

60+ Beautiful Photoshop Logo Tutorials And Resources When we talk about a famous brand, the first thing that comes to mind is its logo. The logo is the most essential component of any personal brand and also the hardest part to execute. A logo must be appropriate, aesthetically pleasing and a reflection of the company’s credibility. An Unconventional Billionaire Is Revolutionizing Philanthropy By Closing His Foundation Some people are into extreme sports, others extreme eating. You could call self-made billionaire Chuck Feeney an extreme philanthropist. Feeney, the 83-year-old co-founder of the pioneering retail business Duty Free Shoppers (the company that sells the tax-free alcohol and perfume in airports), is practically unknown as a public figure.