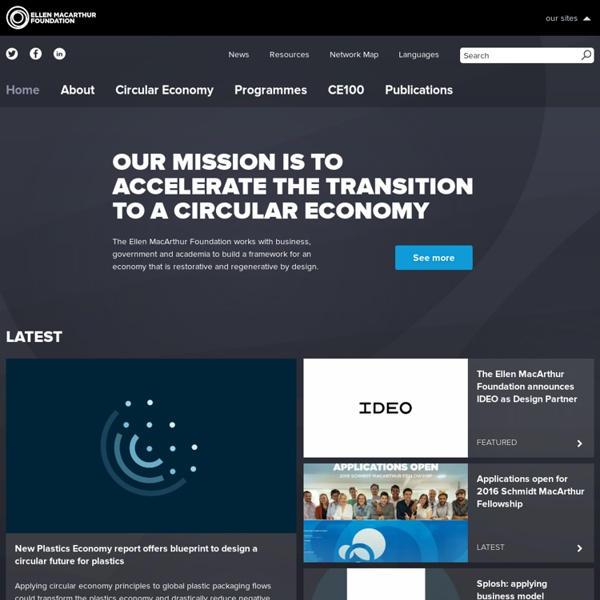 The Ellen MacArthur Foundation works in education, business innovation and analysis to accelerate the transition to a Circular Economy. The circular economy is a generic term for an economy that is regenerative by design. Materials flows are of two types, biological materials, designed to reenter the biosphere, and technical materials, designed to circulate with minimal loss of quality, in turn entraining the shift towards an economy ultimately powered by renewable energy. See it in action

Is Revitalizing A Neighborhood What’s most striking when you enter the brick bunker formerly known as Stock House No. 3 is the green, says Fred Haberman, a cofounder and partner in Urban Organics, a futuristic farm housed inside a long-vacant structure on the former site of Hamm’s Brewery in East St. Paul. "It’s mind-boggling to come into this old building and see so much greenery," he says. "The colors are almost electric. Notes From The Underground “I’m a-goin’ back out ’fore the rain starts a-fallin’… I’ll tell it and think it and speak it and breathe it And reflect it from the mountain so all souls can see it Then I’ll stand on the ocean until I start sinkin’ But I’ll know my song well before I start singin’”– Bob Dylan Seventeen years ago, I read a book called The Evolving Self. Though I didn’t realize it at the time, it profoundly affected the direction of my life.

New Economics Foundation The New Economics Foundation (NEF) is a British think-tank that promotes social, economic and environmental justice.[1] NEF was founded in 1986 by the leaders of The Other Economic Summit (TOES) with the aim of working for a "new model of wealth creation, based on equality, diversity and economic stability".[2] The foundation has 50 staff in London and is active at a range of different levels. Its programmes include work on well-being, its own kinds of measurement and evaluation, sustainable local regeneration, its own forms of finance and business models, sustainable public services, and the economics of climate change. Work[edit] Urban Organics-Haberman Transforming the food system and strengthening local communities. Haberman believes in the pioneering spirit so much that sometimes we just have to take the plunge ourselves. At a new organic urban farm in St. Paul, we’re quite literally diving in because this farm doesn’t use dirt.

GNH Centre Bhutan Gross National Happiness, or GNH, is a holistic and sustainable approach to development, which balances material and non-material values with the conviction that humans want to search for happiness. The objective of GNH is to achieve a balanced development in all the facets of life that are essential; for our happiness. • The Story of GNH • The 4 Pillars & 9 Domains • GNH Today • GNH Organizations James Robertson (activist) James Robertson (born August 11, 1928), a British-born political and economic thinker and activist, became an independent writer and speaker in 1974 after an early career as a British civil servant. He studied Greats at Balliol College, Oxford from 1946 to 1950 where he played cricket and rugby union, and ran cross-country for the University. After serving on British Prime Minister Harold Macmillan’s staff during his "Wind of Change" tour of Africa in 1960, Robertson spent three years in the Cabinet Office.

Report Vol. 3 - 2014 - Circular Economy Reports Report Vol. 3 - 2014 About the Report Business leaders and governments alike acknowledge that continued wealth generation requires a new industrial model that is less dependent on primary energy and materials inputs. In its previous reports, the Ellen MacArthur Foundation has focused on the economic and business benefits of such a circular model of development. CHIEF SEATTLE'S LETTER CHIEF SEATTLE'S LETTER "The President in Washington sends word that he wishes to buy our land. But how can you buy or sell the sky? the land? The idea is strange to us. Small Is Beautiful Small Is Beautiful: A Study of Economics As If People Mattered is a collection of essays by British economist E. F. Schumacher. The phrase "Small Is Beautiful" came from a phrase by his teacher Leopold Kohr.[1] It is often used to champion small, appropriate technologies that are believed to empower people more, in contrast with phrases such as "bigger is better". First published in 1973, Small Is Beautiful brought Schumacher's critiques of Western economics to a wider audience during the 1973 energy crisis and emergence of globalization.

British public to choose ‘greatest issue of our time’ for £10 million prize Longitude Prize 2014, a challenge with a prize fund of £10 million, has been launched today to help solve one the greatest issues of our time. The British public will cast the deciding vote to choose the issue that the prize will tackle. The prize has been developed and run by Nesta, the UK’s innovation foundation. mancunian green: Boon - or Bobbins? As the banking crisis continues, alternative or complementary currencies are back on the agenda, as evidenced by George Monbiot's last piece in the Guardian , and a feature on Lewes Pounds on BBC's radio 4 in the last couple of days. The idea of an alternative currency is not new, and back around 15-20 years ago, LETS schems (Local Exchange Trading Systems)were seen as a key part of the move to a sustainable society and there were close links between Green party activists and LETS schemes in various places around the country. The scheme in Manchester used a currency called 'bobbins' after the cotton industry and for a while local Green Party membership could be paid for in bobbins, though hardly anybody ever did. Unfortunately in recent years I have heard much less about them, and even their co-ordinating body, Letslink, reports a likely drop in membership since the early days. I can think of two reasons why this might be.

Patrick Geddes Sir Patrick Geddes FRSE (2 October 1854 – 17 April 1932) was a Scottish biologist, sociologist, geographer, philanthropist and pioneering town planner (see List of urban theorists). He is known for his innovative thinking in the fields of urban planning and sociology. He introduced the concept of "region" to architecture and planning and coined the term "conurbation".[2] An energetic Francophile,[3] Geddes was the founder of the Collège des Écossais (Scots College) an international teaching establishment in Montpellier, France. Biography[edit]