Center for Media and Democracy 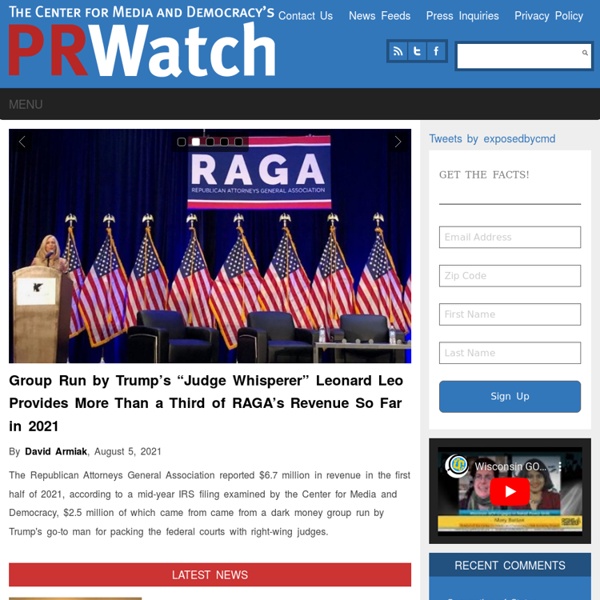 Yes, microlending reduces extreme poverty A small boost in microlending to the developing world could lift more than 10.5 million people out of extreme poverty. That’s one conclusion of my study, published last month in The B.E. Journal of Macroeconomics, which found that microfinance not only reduces how many households live in poverty but also how poor they are. Media Literacy Lesson Plan and Activity for High School Teaching Materials Weeklong Assignment: What is My Media Consumption? My Media Consumption Chart Directions: For one week, use the provided chart and keep track of shows, movies, ads, articles, news stories, anything in the media that you pay attention to regularly, and media items that happen to grab your attention. Follow-Up Assignment

How to Create a Professional Magazine Layout A few times a each month we revisit some of our reader’s favorite posts from throughout the history of Vectortuts+. This tutorial by Otto Coster was first published on August 4th 2010. Have you ever wondered how professional designers strike the perfect balance between text and image? Using InDesign's powerful type tools, you will learn techniques to help you set and arrange a magazine layout. Step 1 Setting up the Document We'll be using a standard A4 size document for this tutorial.

India - World Toilet Organization In late 2011, World Toilet Organization established its SaniShop model in India to increase access of rural households to safe and affordable sanitation. On the ground, we work closely with our local implementing partners eKutir, a social business, based out of Odisha, and Sattva , a media and social business consulting firm based out of Bangalore. Our pilot project was set up in Odisha where eKutir had established its strong rural base. By deploying eKutir’s micro-entrepreneurs to further SaniShop’s mission in providing safe and affordable sanitation to the rural population, this partnership allows the World Toilet Organization and eKutir to create more livelihoods, boost health and dignity among the farming households. eKutir has been able to establish 25 micro-entrepreneurs working for the sanitation cause in three different states of India.

The Problem With U.S. Media Coverage Of The Gun Control Debate The second amendment to the United States Constitution provides law-abiding citizens the right to legally possess firearms. In today’s world, conservatives usually support limited restrictions on gun control, while liberals would prefer more limitations on guns. With statistics on gun usage in the United States, statistics on gun usage in other countries, mass shootings that have occurred, and stories that are spread about both positive and negative gun use, the debate on gun control has become a highly contested and highly controversial topic within the United States.

Yes, giving money to very poor people will make their lives better — just ask Ecuador Is eradicating poverty, a goal the United Nations’ hopes to achieve by 2030, actually feasible? New research out of Ecuador says yes – if governments are willing to pay for it. According to a United Nations University (UNU) - Merit study of Ecuador’s Human Development Bonus (Bono de Desarrollo Humano, or BDH), direct cash transfers have definitively improved social mobility, or the ability of individuals or households to move between social strata. Getting Duped: How the Media Messes with Your Mind IN 2003 nearly half of all Americans falsely assumed that the U.S. government had found solid evidence for a link between Iraq and al Qaeda. What is more, almost a quarter of us believed that investigators had all but confirmed the existence of weapons of mass destruction in Iraq, according to a 2003 report by the University of Maryland’s Program on International Policy Attitudes and Knowledge Networks, a polling and market research firm. How did the true situation in Iraq become so grossly distorted in American minds? Many people have attributed such misconceptions to a politically motivated disinformation campaign to engender support for the armed struggle in Iraq. We do not think the deceptions were premeditated, however.

Fighting corporate seeds in South Asia These photos tell a story of corporate power and its impact on ordinary people. They were taken in the Indian and Bangladeshi countryside where farmers have been fighting the expansion of industrial agriculture for decades. In India, Monsanto has a tight grip on cotton growing with a 90% market share in cotton seeds. Its business model shores up its control of agriculture as farmers are pushed into uncontrollable debt because of expensive seeds and chemicals.