Collaboratively Create Multimedia Documents With Lucidpress. Manaiakalani: Teacher Dashboard + Google Apps for Education. How to Insert Videos Into Google Forms. How to Set Expiration Dates for Shared Google Drive Folders. How to Remote View and Control Your Android Phone. If you’ve ever wished you could see your Android phone’s screen on your desktop or remote control it using your mouse and keyboard we’ll show you how in this simple guide to gaining remote access to your Android device. 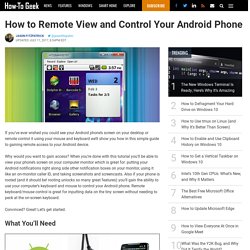 Why would you want to gain access? When you’re done with this tutorial you’ll be able to view your phone’s screen on your computer monitor which is great for: putting your Android notifications right along side other notification boxes on your monitor, using it like an on-monitor caller ID, and taking screenshots and screencasts. Also if your phone is rooted (and it should be! Rooting unlocks so many great features) you’ll gain the ability to use your computer’s keyboard and mouse to control your Android phone. Remote keyboard/mouse control is great for inputting data on the tiny screen without needing to peck at the on-screen keyboard. Convinced? 10 Excellent Video Editing Apps. It's usually an expensive endeavor, but thanks to smartphones, you can try your hand at shooting and editing video without the staggering price. 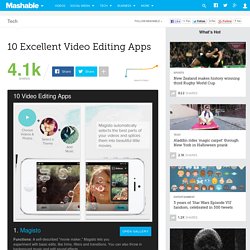 We're not talking about Vine — which is great, of course — but apps uniquely designed for adding personal flare to video. Take a look at our favorites in the gallery up top. Whether you're an iOS or Android user, these apps are sure to bring out the Spielberg in you. Any noteworthy apps we missed? Share them with us in the comments. Homepage image via iStockphoto, TommL. Alternatives to InDesign. Open Source Alternative to InDesign. Adobe InDesign is a versatile desktop publishing application produced by Adobe Systems. 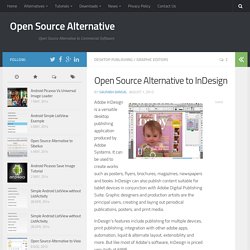 It can be used to create works such as posters, flyers, brochures, magazines, newspapers and books. InDesign can also publish content suitable for tablet devices in conjunction with Adobe Digital Publishing Suite. Graphic designers and production artists are the principal users, creating and laying out periodical publications, posters, and print media. InDesign’s features include publishing for multiple devices, print publishing, integration with other adobe apps, automation, liquid & alternate layout, extensibility and more.

But like most of Adobe’s software, InDesign is priced very high at 699$. 10 Free Open Source Alternatives to Adobe Creative Suite. Posted 06/21/2011 at 1:50pm | by Florence Ion When there's just not enough cash in the bank and you're in a bind, the last thing you're able to do is drop a ton of money for pricey software like Adobe Creative Suite. 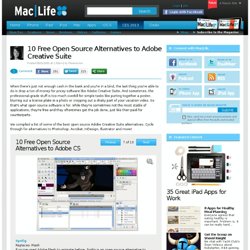 And sometimes, the professional-grade stuff is too much overkill for simple tasks like putting together a poster, blurring out a license plate in a photo or cropping out a shaky part of your vacation video. So that's what open source software is for. While they're sometimes not the most stable of applications, they're free and they oftentimes get the job done, just like their paid-for counterparts. We compiled a list of some of the best open source Adobe Creative Suite alternatives. Scribus: A serious open-source alternative to Quark and InDesign for newsrooms? Adobe InDesign in schools - alternatives. Alternatives to Photoshop. The top 8 alternatives to Photoshop. Photoshop is so ubiquitous these days that, like Google, it's become a verb, so 'to Photoshop' has became shorthand for editing an image. 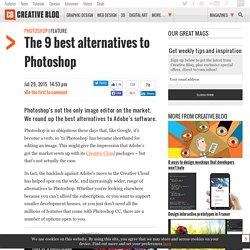 This might give the impression that Adobe's got the market sewn up with its Creative Cloud packages – but that's not actually the case. In fact, the backlash against Adobe's move to the Creative Cloud has helped spur on the wide, and increasingly wider, range of alternatives to Photoshop. Whether you're looking elsewhere because you can't afford the subscription, or you want to support smaller development houses, or you just don't need all the millions of features that come with Photoshop CC, there are a number of options open to you. Promotion Some of these Photoshop alternatives are free, and those that are paid all offer free trials. 01. Platform: Mac Price: £39.99/$49.99/€49.99 Released earlier this month and causing huge buzz within the community, Serif's Affinity Photo is the most serious Photoshop alternative we've seen to date. 03. 04. 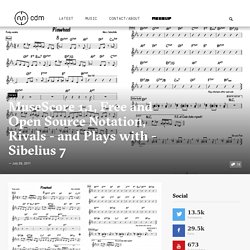 Music notation software has long been seen as a two-horse race, a Pepsi versus Coke stand-off between Finale and Sibelius. But not only are there other alternatives, too, here’s one tool that’s making free and open source notation viable. I’ve spoken previously about engraving tool Lilypond, but it’s not entirely graphical, even with GUI front ends. MuseScore will look more familiar to users of something like Sibelius, and just as the latter released a major upgrade, it also had a big 1.1 release with major new enhancements.

MuseScore has a robust notation engine, capable feature set, and it’s even catching on in a number of academic institutions around the world. Improved interoperability also means you don’t have to choose sides. First, here’s what’s new in MuseScore 1.1, with improvements like jazz and lead sheet functionality: MuseScore isn’t as fully-functional as tools like Sibelius and Finale. Yes there is. Notational Alternatives: Beyond Finale and Sibelius. “Finale or Sibelius?” 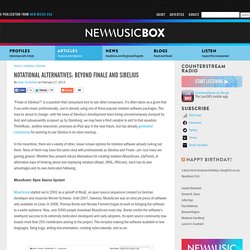 Is a question that composers love to ask other composers. It’s often taken as a given that if you write music professionally, you’re already using one of these popular notation software packages. This may be about to change—with the news of Sibelius’s development team being unceremoniously dumped by Avid and subsequently scooped up by Steinberg, we may have a third variable to add to that equation. ThinkMusic, another newcomer, promises an iPad app in the near future, but has already generated controversy for seeming to use Sibelius in its video mockup. In the meantime, there are a variety of other, lesser-known options for notation software already lurking out there. MuseScore: Open Source Upstart MuseScore started out in 2002 as a spinoff of MusE, an open source sequencer created by German developer and musician Werner Schweer. The Music Notation Project. Towards Software for Alternative Music Notations What follows is a strategy for creating a basic “transnotator application” for alternative music notations with minimal effort and expense while also providing an optimum set of features and benefits. 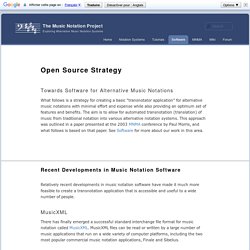 The aim is to allow for automated transnotation (translation) of music from traditional notation into various alternative notation systems. This approach was outlined in a paper presented at the 2003 MNMA conference by Paul Morris, and what follows is based on that paper. See Software for more about our work in this area. Recent Developments in Music Notation Software.