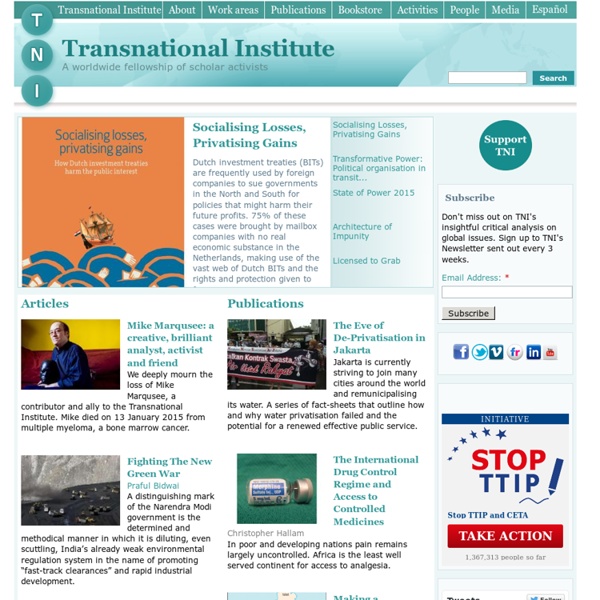 Troubled waters of ocean governance under scrutiny TNI's Agrarian Justice team reiterates the hazardous consequences of current ocean governance and policy frameworks, which have been repeatedly raised by social movements representing fisher people at the Global Oceans Action Summit. Exorcising the Curse of Voodoo Economics Reclaiming Development, a closely-argued critique of neoliberal economic policy, is debunking development orthodoxies at its best. Republished now, ten years after its first appearance, the book has lost none of its relevance for students and those trying to re-direct economic policies away from their financialized doom-loops. Happy Birthday TNI

Defensive Publications Series Follow index Submissions from 2015 2015 LOCAL CONTENT CACHING, Eldridge Alexander LINKING EMAIL DATA WITH OTHER APPLICATIONS, Sofia Andrianakou and Sarah Xie Wireless Keyboard Without Need For Battery, Vijay Asrani and James Tanner Small is beautiful – an economic idea that has sadly been forgotten EF Schumacher's Small is Beautiful was the first book on politics I ever read; it was the only book about politics I ever saw my father read or heard him talk about. It arrived in our cottage in rural North Yorkshire as a manifesto from a radical countercultural world with which we had no contact. Re-reading its dense mixture of philosophy, environmentalism and economics, I can't think what I could possibly have understood of it at 13, but in a bid to impress my father I ploughed on to the end. Looking back over the intervening almost four decades, the book's influence has been enormous. "Small is beautiful" was a radical challenge to the 20th century's intoxication with what Schumacher described as "gigantism". For several decades, mass production methods were producing more cheap goods than ever before; the mass media and mass culture opened up new opportunities to a wider audience than ever.

The Secret Agents of Capitalism Are All Around Us The young people grouped at the end of the bar resemble Gap models. They are facially attractive, in that asymmetrical sort of way, and they wear the new uniform of the Internet cast-aside who still has money to carouse with: tight dark blue jeans, T-shirts a bit too small and hair slightly greased. It's a Wednesday night at a small bar on Manhattan's Lower East Side.

Board Game about Principles of Democracy and Politics - Garcia, Orlando David The present invention relates generally to board games, and more particularly to an educational and entertaining board game for teaching principles of democracy and politics and providing an overview of fundamental factors that interact in a democratic society. Political strategy games and presidential election games are known in the art. Generally, these games are electronic games with a complex internal model that may represent the population of specific states or countries; these games are directed toward young adults with specific interest in politics, making them unsuitable for younger students.

An Unconventional Billionaire Is Revolutionizing Philanthropy By Closing His Foundation Some people are into extreme sports, others extreme eating. You could call self-made billionaire Chuck Feeney an extreme philanthropist. Feeney, the 83-year-old co-founder of the pioneering retail business Duty Free Shoppers (the company that sells the tax-free alcohol and perfume in airports), is practically unknown as a public figure.

mancunian green: Boon - or Bobbins? As the banking crisis continues, alternative or complementary currencies are back on the agenda, as evidenced by George Monbiot's last piece in the Guardian , and a feature on Lewes Pounds on BBC's radio 4 in the last couple of days. The idea of an alternative currency is not new, and back around 15-20 years ago, LETS schems (Local Exchange Trading Systems)were seen as a key part of the move to a sustainable society and there were close links between Green party activists and LETS schemes in various places around the country. The scheme in Manchester used a currency called 'bobbins' after the cotton industry and for a while local Green Party membership could be paid for in bobbins, though hardly anybody ever did.

GNH Centre Bhutan Gross National Happiness, or GNH, is a holistic and sustainable approach to development, which balances material and non-material values with the conviction that humans want to search for happiness. The objective of GNH is to achieve a balanced development in all the facets of life that are essential; for our happiness. • The Story of GNH • The 4 Pillars & 9 Domains • GNH Today • GNH Organizations Why does GNH matter? Notes From The Underground “I’m a-goin’ back out ’fore the rain starts a-fallin’… I’ll tell it and think it and speak it and breathe it And reflect it from the mountain so all souls can see it Then I’ll stand on the ocean until I start sinkin’ But I’ll know my song well before I start singin’”– Bob Dylan Seventeen years ago, I read a book called The Evolving Self. Though I didn’t realize it at the time, it profoundly affected the direction of my life. Here’s the section of the book that became a splinter in my mind and resonated the most with me:

CHIEF SEATTLE'S LETTER CHIEF SEATTLE'S LETTER "The President in Washington sends word that he wishes to buy our land. But how can you buy or sell the sky? the land? The idea is strange to us. If we do not own the freshness of the air and the sparkle of the water, how can you buy them? Fighting corporate seeds in South Asia These photos tell a story of corporate power and its impact on ordinary people. They were taken in the Indian and Bangladeshi countryside where farmers have been fighting the expansion of industrial agriculture for decades. In India, Monsanto has a tight grip on cotton growing with a 90% market share in cotton seeds. Its business model shores up its control of agriculture as farmers are pushed into uncontrollable debt because of expensive seeds and chemicals.

pirate-politics - An open-source framework for political organizing. Pirate-Politics is a software platform designed to act as an infrastructural lattice around which the social network of a modern political organization can be built. Pirate Politics will be: A system through which users will be able to deliberate over and decide upon a cohesive set of objectives for the organization (adaptive platform) A system that will enable users to actively organize and grow the organization in the real world, and influence and win elections (electioneering system) A showcase of innovative computer learning and collective intelligence techniques that are designed to facilitate direct democracy and consensus decision making within a very large social network. Objectives

Yes, microlending reduces extreme poverty A small boost in microlending to the developing world could lift more than 10.5 million people out of extreme poverty. That’s one conclusion of my study, published last month in The B.E. Journal of Macroeconomics, which found that microfinance not only reduces how many households live in poverty but also how poor they are.