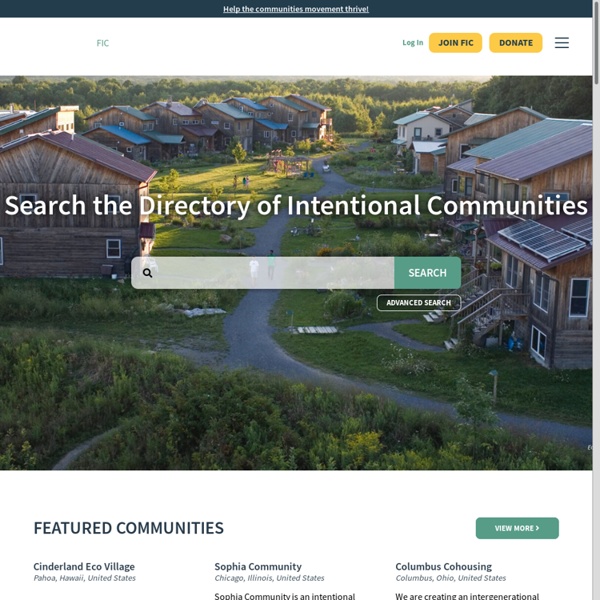 The Fellowship for Intentional Community (FIC) is a nonprofit dedicated to promoting cooperative culture. Thank you for visiting! We believe that intentional communities are pioneers in sustainable living, personal and cultural transformation, and peaceful social evolution. ”Intentional communities” include ecovillages, cohousing, residential land trusts, income-sharing communes, student co-ops, spiritual communities, and other projects where people live together on the basis of explicit common values. Since our beginning in 1987, we go about our work in a number of ways, including the Communities Directory, Communities magazine, Community Bookstore, community-focused Events, Classifieds, the Blog, and more. Our passion is promoting cooperative culture and sustainable living.

Small is beautiful – an economic idea that has sadly been forgotten EF Schumacher's Small is Beautiful was the first book on politics I ever read; it was the only book about politics I ever saw my father read or heard him talk about. It arrived in our cottage in rural North Yorkshire as a manifesto from a radical countercultural world with which we had no contact. Re-reading its dense mixture of philosophy, environmentalism and economics, I can't think what I could possibly have understood of it at 13, but in a bid to impress my father I ploughed on to the end. Looking back over the intervening almost four decades, the book's influence has been enormous.

8 Days Yoga and Diving Holiday in Maldives - BookYogaRetreats.com The seaside rooms which are 44 square meters in size, are affordable and comfortable accommodations. They are nicely furnished, with a modern and elegant double sink bathroom. The rooms have a wide patio door looking onto a cozy wooden veranda just beside the endless white beach. Intentional community Characteristics[edit] Purpose[edit] The purposes of intentional communities vary in different communities. Shareable: Mais Oui, We Share Photo courtesy of Stefano Borghi “During the most impressive panel of the conference (that I saw), four whipsmart women talked about the intersection of the collaborative economy with government: Molly Turner, Director of Public Policy for Airbnb, April Rinne of Collaborative Lab, Helen Goulden from Nesta, and Anne-Laure Brun Buisson from Sharelex. They recommended a collaborative, non-oppositional relationship with policymakers and regulators, and pointed out that most governments are in crisis, already unable to provide basic services and facing more cuts. In other words, government has never been more open to ideas like a skillsharing platform that supports employment; transportation-sharing programs that enable mobility; a time-dollar system that provides care to fragile elderly, etc. Read more of Ariane’s highlights on Shareable .

Marjorie Kelly: Divine Right of Capital Berrett-Koehler Publishers Buy on Amazon Find a local bookseller on IndieBound William Greider writes in the Foreword, “Can we imagine an economy in which firms are typically owned in large part by the people who work there? In which corporate boards of directors are required to exercise broad fiduciary obligations to all of the stakeholders in the company — employees and community as well as absentee owners? Can we imagine a broader, more inclusive understanding of property rights? 8 Days Yoga and Diving Retreat in Zanzibar - BookYogaRetreats.com Entering a meditative state of mind and being in the present moment. The fusion of yoga and diving can help you understand what meditation is and how you will be able to apply it in your daily life. Through diving, one can experience a moving meditative state, a sense of peace and connectedness with nature.

Freeworlder.org - Being a Freeworlder (Press Release July 2013) Details Published: Wednesday, 10 July 2013 09:16 Written by Colin Turner Magazine Online THE ESSENTIAL TEACHINGS Awaken to the Will of God & Self–Will and Attachment A WORD FROM SHUMEI AMERICA'S DIRECTOR Shumei's First Beacon of Light in the West Sensei Eugene Imai A VOICE FROM CRESTONE Celebrating a Decade in Crestone Matthew Crowley A WORD ON SHUMEI PRACTICES How to Feel Jyorei Roy Gibbon IN MEMORIAM The Missing Sixty years George Bedell A WORD ON THE ARTS World Premiere at Shumei Hall Rodney Punt The Secret Agents of Capitalism Are All Around Us The young people grouped at the end of the bar resemble Gap models. They are facially attractive, in that asymmetrical sort of way, and they wear the new uniform of the Internet cast-aside who still has money to carouse with: tight dark blue jeans, T-shirts a bit too small and hair slightly greased. It's a Wednesday night at a small bar on Manhattan's Lower East Side. ''I feel so great, so real,'' says a slight young woman with spindly arms and wide eyes. A blue bandanna is tied tightly around her head.

World-Wide Labyrinth Locator - Locate a Labyrinth Country: Australia Simplified results: no 100 labyrinths found. Showing 1-20. An Unconventional Billionaire Is Revolutionizing Philanthropy By Closing His Foundation Some people are into extreme sports, others extreme eating. You could call self-made billionaire Chuck Feeney an extreme philanthropist. Feeney, the 83-year-old co-founder of the pioneering retail business Duty Free Shoppers (the company that sells the tax-free alcohol and perfume in airports), is practically unknown as a public figure. Though Forbes once ranked him the 23rd-richest person alive, you wouldn’t realize it if you met him on the street: In his prime, he famously wore a $15 watch and flew economy. You certainly won’t find his name on any buildings.

virtuallynomadic “Oh, you are going to Koh Samui!? Are you going to the Full Moon party? Oh, it’s so much fun!” says the beautiful Thai girl behind the Airport check-in desk. A stark contrast to the extremely sharp and restrictive China and Japan were we just came from. Back to the Land of Smiles and with a visa on arrival, you simply can’t beat Thailand.