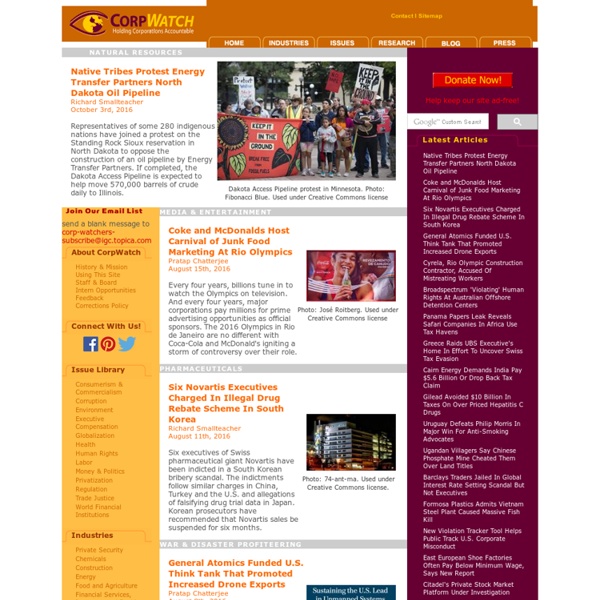 Small is beautiful – an economic idea that has sadly been forgotten EF Schumacher's Small is Beautiful was the first book on politics I ever read; it was the only book about politics I ever saw my father read or heard him talk about. It arrived in our cottage in rural North Yorkshire as a manifesto from a radical countercultural world with which we had no contact. Re-reading its dense mixture of philosophy, environmentalism and economics, I can't think what I could possibly have understood of it at 13, but in a bid to impress my father I ploughed on to the end. Looking back over the intervening almost four decades, the book's influence has been enormous.

The Ecologist Top 10 foods to forage Thanks to modern agricultural methods, foraging – once a part of the majority’s daily life – has faded away, replaced by regular trips to the supermarket instead. Recently, however, there has been a revival of interest in raiding nature’s larder thanks to increased awareness of the health benefits of wild food, not to mention the TV exploits of Bear Grylls, Ray Mears and co. But it foraging is about more than just food. It gets us out into the countryside and helps to cultivate an intimate appreciation of nature, re-establishing a connection severed by modern urban life. SourceWatch Koch Spy Agency Led by Voter Fraud Huckster The Kochs have been complaining about a "lack of civility in politics" as they seek to boost their public image--but one of their top operatives helped propel perhaps the most egregious case of race-baiting voter fraud hucksterism in recent years. At the same time that the Kochs have been on a PR blitz, publicly spinning an image of themselves as well-intentioned patriots trying to make the world a better place and decrying "character assassination," they've been quietly ramping up a clandestine surveillance and intelligence gathering operation focused on their perceived political enemies, Ken Vogel reports at Politico. At the helm of this "competitive intelligence" operation is a man named Mike Roman, Vice President of Research for Kochs' Freedom Partners and who was paid $265,000 last year, according to Freedom Partners' recent tax filing. Read the rest of this item here. Wisconsinites Reject the "Eric O'Keefe Session" of the Legislature

UPDATED: The HB Gary Email That Should Concern Us All As I wrote yesterday , there is a leaked email that has gotten surprisingly little attention around here. It's the one where Aaron Barr discusses his intention to post at Daily Kos - presumably something negative about Anonymous, the hacking group. But that's not the email I'm talking about here. Marjorie Kelly: Divine Right of Capital Berrett-Koehler Publishers Buy on Amazon Find a local bookseller on IndieBound William Greider writes in the Foreword, “Can we imagine an economy in which firms are typically owned in large part by the people who work there? In which corporate boards of directors are required to exercise broad fiduciary obligations to all of the stakeholders in the company — employees and community as well as absentee owners? Can we imagine a broader, more inclusive understanding of property rights?

These three firms own corporate America A fundamental change is underway in stock market investing, and the spin-off effects are poised to dramatically impact corporate America. In the past, individuals and large institutions mostly invested in actively managed mutual funds, such as Fidelity, in which fund managers pick stocks with the aim of beating the market. But since the financial crisis of 2008, investors have shifted to index funds, which replicate established stock indices, such as the S&P 500. The magnitude of the change is astounding: from 2007 to 2016, actively managed funds have recorded outflows of roughly US$1,200 billion, while index funds had inflows of over US$1,400 billion. In the first quarter of 2017, index funds brought in more than US$200 billion – the highest quarterly value on record. Democratising the market?

Declassified Government Documents Declassified Government Documents About Declassified Documents | Security Classification | Guides | FOIA Information | Collections at UC Berkeley | Internet Collections and Indexes | Presidential Libraries About Declassified Documents Sherrod Brown isn't toning it down - David Catanese and Manu Raju Sherrod Brown is Ohio’s last statewide Democrat standing after a Republican tide washed over the state in November. The first-term senator’s approval rating rests below the perilous 50 percent mark, and he’s compiled one of the most liberal voting records during his four years in the upper chamber. Political custom suggests that Brown, who’s up for reelection in 2012, would have made a break toward the center by now.

The Secret Agents of Capitalism Are All Around Us The young people grouped at the end of the bar resemble Gap models. They are facially attractive, in that asymmetrical sort of way, and they wear the new uniform of the Internet cast-aside who still has money to carouse with: tight dark blue jeans, T-shirts a bit too small and hair slightly greased. It's a Wednesday night at a small bar on Manhattan's Lower East Side. ''I feel so great, so real,'' says a slight young woman with spindly arms and wide eyes. A blue bandanna is tied tightly around her head.

Introducing the First Draft Coalition – First Draft Imagine the following situation: you’re sitting at your computer or looking at your mobile phone, when suddenly you come across a powerful first-person video on YouTube, or a visceral image on Twitter, depicting a breaking news event. You want to share it, but it’s coming from a source or a person you’ve never heard of before so you find yourself wondering… “is this real?” If you’re a journalist working in a newsroom today, it’s likely you’ve found yourself in this situation many times before, if not many times a day.

Five Student Protesters Arrested at Michigan Capitol During Sit In Five students chose to stay and get arrested today when the Lansing rally and protest against Governor Rick Snyder’s “financial martial law” (among other rights Snyder’s bill takes away) was interrupted by state police demanding that the protesters leave the interior of the Capitol. As protesters banged on the doors from the outside and protesters on the inside chanted, “Let them in! Let them in!”

An Unconventional Billionaire Is Revolutionizing Philanthropy By Closing His Foundation Some people are into extreme sports, others extreme eating. You could call self-made billionaire Chuck Feeney an extreme philanthropist. Feeney, the 83-year-old co-founder of the pioneering retail business Duty Free Shoppers (the company that sells the tax-free alcohol and perfume in airports), is practically unknown as a public figure. Though Forbes once ranked him the 23rd-richest person alive, you wouldn’t realize it if you met him on the street: In his prime, he famously wore a $15 watch and flew economy. You certainly won’t find his name on any buildings.