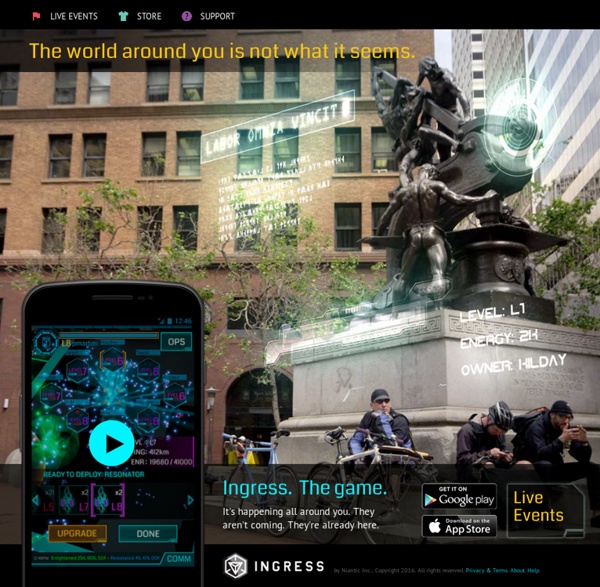 The Mobility Drill That Gives You a Tough Cardio Challenge Related: Try the Anarchy Workout—One Guy Lost 18 Pounds of Fat in Just 6 Weeks! But the human body is built to move in every direction. And not just move, but also stabilize movement. From the smaller ligaments in your feet and ankles to the bigger muscles that power your knees and hips to the core muscles that protect your spine, it all needs to work in coordinated action to keep your joints safe and your body nimble. Player used on the /video page of Zeus version of menshealth.com This new three-step lateral-movement drill by Men’s Health Fitness Director B.J. The Gamification of Education and Cognitive, Social, and Emotional Learning Benefits Guest post by Jane Wolff. The current trend towards the increased use of games and game mechanics in instructional situations could probably have been foreseen quite some time ago. Stretching right back to the primitive gaming technology of the ZX Spectrum in the early 80’s, kids were hooked. As a wider variety and higher quality of educational games have been produced, it is really no surprise that educationists have gravitated towards further use of them as tools in the learning environment. Is this necessarily a positive development, however? A recent article on the subject makes for interesting reading.

Goodbye Virtual Reality, Hello Augmented Reality inShare0 Credit: Wired If you haven’t yet heard about Augmented Reality or Web Squared, allow me to make a quick introduction. This is the next iteration of the Web and also desktop and mobile applications and is indicative of the future hybrid Web and device experience. Fringe (TV series) Early critical reception of the first season was lukewarm but became more favorable in subsequent seasons, when the series began to explore its mythology, including parallel universes and alternate timelines. The show, as well as the cast and crew, has been nominated for many major awards. Despite its move to the "Friday night death slot" and low ratings, the series has received a cult following.

50 Awesome Apps for Teachers Encode a secret message on a World War II Enigma machine. Journey into outer space to explore the surface of the sun. Or see what your town looked like in the 1800s. No, these aren’t Ms. The 13 Best Exercises for Burning Fat Related: RIPTENSITY—Fast Bodyweight Workouts From Men’s Health That Are So Intense, They Rip Away Body Fat! They work every muscle in your body. You’ll burn a lot of calories and your heart rate will go sky high. Introducing a Game-Based Curriculum in Higher Ed Continuing from last week’s post about “The Gamification of Education”, this week we bring you a guest post from Justin Marquis, who examines the why’s and how’s of incorporating game based learning elements into the higher education curriculum. The gamification movement is in full-effect with its fair share of proponents and opponents. Those in favor of the idea most often cite student motivation and the ability of games to simulate real world circumstances so that learners can safely explore these environments without endangering themselves or others. Those on the other side of the argument think gamification is just a fad and that there is no real transfer of what is learned in games to the real world. There is enough research on both sides to support either point of view, but perhaps those most opposed to the incorporation of games into their curriculum just don’t know where to begin? Why Games in Higher Ed?

LED Lights Make Augmented Vision a Reality LED Lights Make Augmented Vision a Reality Okay, this is just freaky. We know LED lights are versatile enough to be used for practically anything, but LED contact lenses? Really?! Yes, as it turns out, really. University of Washington researchers have figured out how to implant semitransparent red and blue LED lights in contact lenses, for the purpose of receiving and displaying data in sharp visual images and video.

investigation:characters [Niantic Project Wiki] To prevent vandalism, unregistered users cannot edit this wiki. If you would like to contribute, please create an account. The investigation has uncovered a number of individuals involved in the Niantic Project, some by choice, and others by circumstance. 11 Innovative Startups to Remember from MWC 2015 Barcelona’s Mobile World Congress (MWC) is undoubtedly the place to connect with large telcos and hear about their latest gadgets, but it has also become more and more relevant for anyone interested in mobile startups. Most of the startup activity this year took place at twin event 4Years From Now (4YFN), which grew considerably since its first edition last year, both in terms of size and of number of visitors. According to its organizers, overall attendance tripled year-on-year, reaching 8,000 participants. The number of attending investors also quadrupled compared to 2014, with more ‘suits’ stopping by to see for themselves what the fuss was all about. 4YFN’s venue itself was much bigger than last year, albeit without becoming as overwhelming as MWC.

The 5 Best Exercises Every Guy Should Master There are so many things I would do differently. If I had known back then what I know today, I could have avoided a plethora of injuries along the way. That’s why I’m sharing 5 specific exercises with you today. These are the key movements that should serve as the foundation upon which your general fitness is built. Educating Players: Are Games the Future of Education? CAMBRIDGE, Mass.—Smart phones, tablets and video game systems are often seen as distractions to school children in developed countries, which tend to adhere to a strict teacher-student educational model. At Technology Review‘s Emerging Technologies (EmTech) conference here on October 25, a panel of technologists and educators posited that it’s time to embrace students’ use of such technologies and rethink learning in both developed and developing countries.