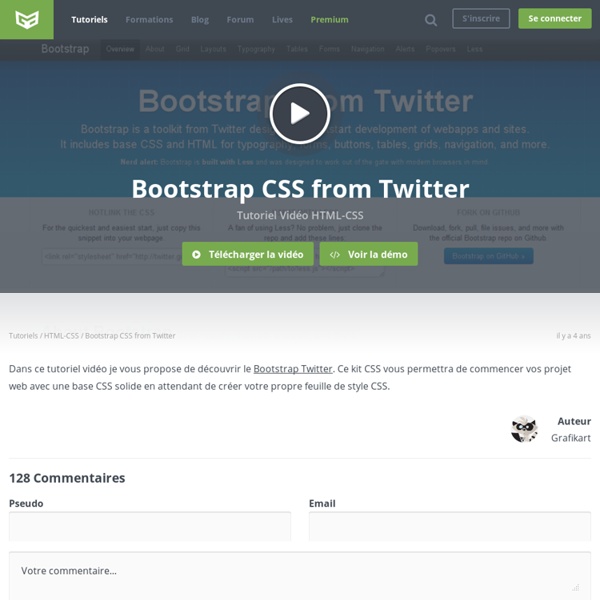 Bootstrap 2.0.4 Need reasons to love Bootstrap? Look no further. Built for and by nerds Like you, we love building awesome products on the web. Three Big Qs in Big Data The Big Data battle is still on, most of organizations haven’t seen clear symbol to declare victory yet, though everyone is talking about “V” words these days: Volume, Velocity, Variety, and look for big Value; if switch the angle a bit, how to see Big Data in the lens of “Q”? 1. Quantity The growth of Data is exponential: The volume of business data worldwide is expected to double every 1.2 years. Data is growing at 40% compound annual rate, reaching nearly 45 ZB by 2020. Every day, 2.5quintillion bytes of data are created, with 90% of the world’s data created in the past two years, also, data production will be 44 times greater in 2020 than in 2009.

5 reasons NOT to use Twitter Bootstrap In our previous blog post, we discussed some of the benefits of using Twitter Bootstrap for web design and development projects. There are plenty of downsides to Twitter Bootstrap as well. Let’s have a look at the major problems it can create: 1. It doesn’t follow best practices Fundamentals Last updated 2012 December 30 Working with D3 requires an appreciation of the following concepts. Hypertext Markup Language is used to structure content for web browsers. The simplest HTML page looks like this:

Bootstrap Toolbox - Tools, Utilities, Generators and Templates Ever since it was initially released, Bootstrap has taken the internet by a storm. It keeps growing in popularity with each passing day — and why shouldn’t it be popular? After all, where else do you find a responsive framework with such an extensive library of pre-styled components, and a community that offers many, many extras and addons? In this collection, we have put together some of the best Bootstrap resources. NewApplication Create a new application with the play command The easiest way to create a new application is to use the play new command. $ play new myFirstApp This will ask for some information.

christopheviau Intro Data-Driven Documents, or D3 for short, is a new visualization library to build visualizations in SVG. But in my opinion, it's also the best javascript multipurpose SVG library when it comes to animation, interaction and above all for binding data to graphics. The community is very responsive, source code is very clean and the API is well written. There is not a lot of tutorials to learn D3 yet.