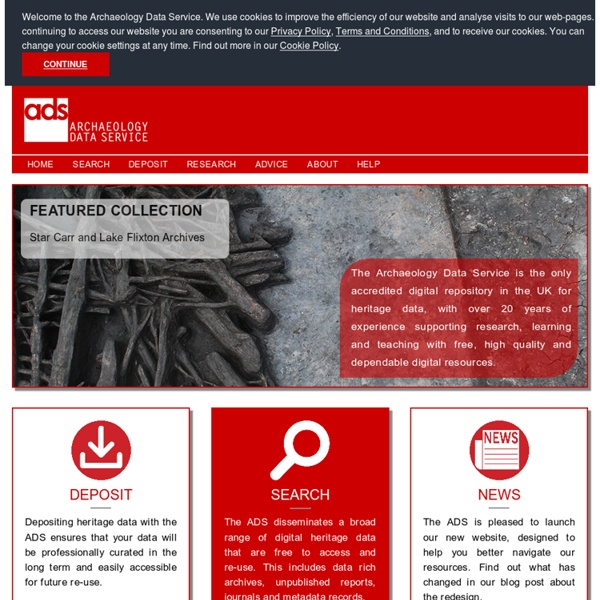 Stonehenge Discovery 'Blows Lid Off' Old Theories About Builders Of Ancient Monument From who built it to what it was used for, Stonehenge is surrounded by many enduring mysteries — and researchers from the University of Buckingham in England now say they’ve solved one of them. “For years people have been asking why is Stonehenge where it is, now at last, we have found the answers,” David Jacques, an archaeology research fellow at the university, said in a written statement. Last October, Jacques led an archaeological dig at a site 1.5 miles from Stonehenge. His team unearthed flint tools and the bones of aurochs, extinct cow-like animals that were a food source for ancient people. Carbon dating of the bones showed that modern-day Amesbury, an area that includes the dig site and Stonehenge itself, has been continuously occupied since 8820 B.C.

Hello from The Archaeological Settlements of Turkey - TAY Project Portal! was set up to build a chronological inventory of findings for the cultural heritage of Turkey - an important component of World Heritage sites - and to share this information with the international community. Although both Anatolia and Thrace have revealed cultural traces dating to at least 400.000 years ago, results from early 19th century investigations as well as data generated by current surveys and excavations are neither well organised nor easily accessible. The locations of many sites remain unknown, while many of them have been and continue to be destroyed, taking their undiscovered secrets with them.

English Heritage: Laser Scanning for Heritage This document has been generated as part of the Heritage3D project. Heritage3D is sponsored by English Heritage’s National Heritage Protection Commissions programme (projects 3789 MAIN and 5496 MAIN) and undertaken by the School of Civil Engineering and Geosciences at Newcastle University. The project has sought to provide guidance to archaeologists, local planning authorities, instrument manufacturers and software developers on the use of 3D laser scanning in the conservation of cultural heritage. The primary aims of this project were to develop and support best practice in laser scanning for archaeology and architecture, and to disseminate this best practice to users, along with the education of likely beneficiaries. A guidance note arising from Heritage3D, entitled ‘3D Laser Scanning for Heritage’ was published in 2007. The present document, a substantial revision of the 2007 guidance note, has been developed as part of the follow-on project.

What Nagasaki looked like before and after the bomb Three days after leveling the city of Hiroshima with a uranium atomic bomb known as a "Little Boy," the United States dropped the more menacing-sounding "Fat Man" over Nagasaki. It was Aug. 9, 1945. Some 40,000 to 80,000 people were killed, and much of the city was pulverized. Nuclear weapons would never again be used in warfare. This is what Nagasaki looked like 70 years ago, before the bomb fell:

Collections - Segedunum Roman Fort Click here for more details about using our collections search, including terms and conditions. The Roman collections at Segedunum relate to the more recent excavations of the 1970s, 80s and 90s. Their particular significance lies in the fact that they represent a comparatively comprehensive span of both the 300 year occupation of the site, and of the assorted structures within it. Several items deserve particular mention, including the only stone toilet seat from Roman Britain, a delightful portable shrine, surviving spearheads and sections of ring mail armour and a collection of rounded throwing stones - defensive missiles for the Fort. The Strong Place Gallery has artefacts associated with local coalmining and shipbuilding as well some Roman objects from more recent excavations close to the river.

Dakhleh Oasis Project, Arts, Monash University The Dakhleh Oasis Project (DOP) is a long-term regional study of the interaction between environmental changes and human activity in the closed area of the Dakhleh Oasis, Western Desert of Egypt, but including the larger area of the Palaeoasis. The study includes all the time since the first incursion of humans in the Middle Pleistocene, perhaps 400,000 years ago, down to the 21st century oasis farmers, and all the human activity and all the changing environmental conditions for which there is evidence within the time period. To achieve such an assessment, it is necessary to gather data on the modern environment and all past environmental conditions.

BBC History - 12 amazing WW1 facts that you probably don't know 3 June 2014Last updated at 14:17 GMT The secret tunnelers of WW1 World War One often conjures up images of a horrific bloodbath fought in the trenches of the Western Front. While this certainly captures some of the reality, did you know that the war spread as far as China? Or that it was fought by servicemen from Asia, North America, the Caribbean, Australasia and Africa? Here are 12 surprising facts about World War One that you probably didn't know. Collections - Tyne and Wear Archives & Museums Click here for more details about using our collections search, including terms and conditions Our Collections Our venues hold outstanding collections in the fields of archives, art, science and technology, ethnography, archaeology, military and social history, maritime history and natural sciences. Our art, natural science, archives and science and industry collections have been awarded Designated status by the Department for Culture, Media and Sport in recognition of their national importance.

7 Submerged (Underwater) Wonders of the World Underwater City Ruins: 7 Submerged Wonders of the World Article by Urbanist, filed under 7 Wonders Series in the Travel category. A wealth of human history lies submerged in ancient cities at the bottoms of lakes, seas and oceans of the world. ADS: Big data Preservation and Management Strategies for Exceptionally Large Data Formats: 'Big Data' Review of nature of technologies and formats This report has been produced as part of the Big Data Project. It is a technical review of each of the 'Big Data' technologies currently practised by archaeologists, with a consideration of data formats for preservation and future dissemination. The discussion focuses on the following technologies: Sidescan Sonar