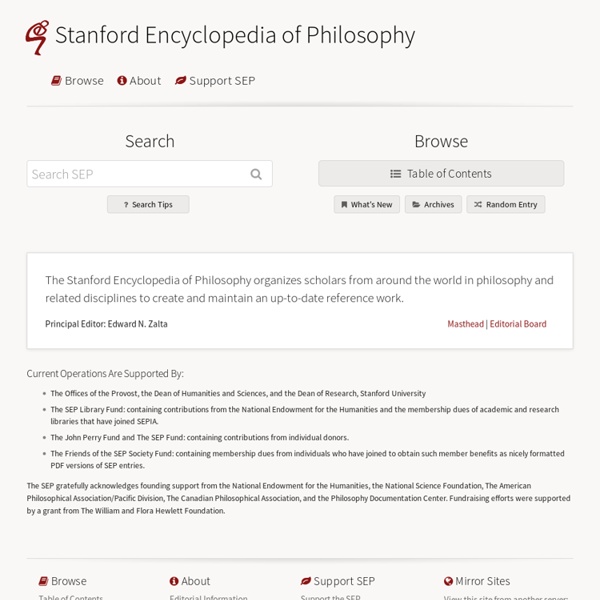 The Stanford Encyclopedia of Philosophy organizes scholars from around the world in philosophy and related disciplines to create and maintain an up-to-date reference work. Principal Editor: Edward N. Zalta Current Operations Are Supported By: The Offices of the Provost, the Dean of Humanities and Sciences, and the Dean of Research, Stanford University The SEP Library Fund: containing contributions from the National Endowment for the Humanities and the membership dues of academic and research libraries that have joined SEPIA. The John Perry Fund and The SEP Fund: containing contributions from individual donors.

Who were the Mongols? Around 500 BCE, a tribe of nomadic people called the Mongols lived in Asia. The Mongols were traders and herdsmen. They herded sheep and traded horses with the ancient Chinese and Persians. We're Underestimating the Risk of Human Extinction Unthinkable as it may be, humanity, every last person, could someday be wiped from the face of the Earth. We have learned to worry about asteroids and supervolcanoes, but the more-likely scenario, according to Nick Bostrom, a professor of philosophy at Oxford, is that we humans will destroy ourselves. Bostrom, who directs Oxford's Future of Humanity Institute, has argued over the course of several papers that human extinction risks are poorly understood and, worse still, severely underestimated by society. Some of these existential risks are fairly well known, especially the natural ones. But others are obscure or even exotic. Most worrying to Bostrom is the subset of existential risks that arise from human technology, a subset that he expects to grow in number and potency over the next century.

The American Revolution - US History Scene The American Revolution was by no means a purely American-British conflict. The fight for American independence piqued the interest of Europe’s most powerful colonial powers. The result of this conflict would not only determine the fate of the thirteen North American colonies, but also alter the balance of colonial power throughout the world. Similar to how the colonies’ dissatisfaction with the British was years in the making, European involvement in the American Revolution came at the end of a century filled with intense imperial rivalry. In particular, the outbreak of armed conflict between the American colonies and Britain occurred only twelve years after the end of the Seven Years’ War (1756-1763).

This is Marilyn.com - Social Network for Marilyn Monroe Fans From her platinum locks to her glamorous wardrobe, she set a standard for American beauty that no one else could match. This is Marilyn! Marilyn Monroe has spread the word "wow" over the United States and Europe for over six decades. Gathering confidence as she grew older, Miss Monroe told America that she had a style and she wasn’t going to change it.

Internet History Sourcebooks Internet Ancient History Sourcebook The Internet Ancient History Sourcebook has expanded greatly since its creation, and now contains hundred of local files as well as links to source texts throughout the net. See Introduction for an explanation of the Sourcebook's goals. See the Help! page for all the help on research I can offer. Science and Nonduality In this article standup philosopher Tim Freke articulates the nature of ‘paralogical’ thinking, which is the foundation of the philosophy and practices he shares to guide people to a ‘deep awake’ state. The need for paralogical thinking arises from an important insight. Life is profoundly paradoxical. The American Revolution The American Revolution was the struggle by which thirteen colonies won independence from Great Britain, to become what we now know as The United States of America. The thirteen original states that joined together in the American Revolution against the mother country were New Hampshire, Massachusetts, Rhode Island, Connecticut, New York, New Jersey, Pennsylvania, Delaware, Maryland, Virginia, North Carolina, South Carolina, and Georgia. The American Revolution came about primarily because the colonists had matured. Their interests and goals were so different and distant from those of the mother country. Local politics, practices, social customs, religious beliefs, and economic interests had gone so far from the English ways.

Mystics, Sages, Saints and Gurus The Psychophysiological Principle states: Any experience that you have, you have only while you are having a specific brain wave pattern. If your brain wave patterns change then your experience will change. Dr. Connections Connections The Metropolitan Museum of Art Share Share 10 Mind-Blowing Theories That Will Change Your Perception Of The World by Anna LeMind Reality is not as obvious and simple as we like to think. Some of the things that we accept as true at face value are notoriously wrong. Scientists and philosophers have made every effort to change our common perceptions of it.

Proclamation Line of 1763, Quebec Act of 1774 and Westward Expansion - 1750–1775 The British won vast territory in North America after the Seven Years’ War, but with the land came numerous problems of how to govern it. Conflicts arose from the inability of British officials to balance the interests of colonists and Indians, which led to colonial dissatisfaction with imperial rule and, ultimately, to the causes of the American Revolution. The Proclamation Line of 1763—between the red colored colonies and the pink territories The Treaty of Paris of 1763 that ended the Seven Years’ War provided Great Britain with enormous territorial gains. Under the treaty, Canada and the entire present-day United States east of the Mississippi came under British control. With the official end of the war, Anglo-American colonists began to pour over the Appalachian Mountains in search of land.

List of peace activists This list of peace activists includes people who've proactively advocated diplomatic, philosophical, and non-military resolution of major territorial or ideological disputes through nonviolent means and methods. Peace activists usually work with others in the overall peace movement to focus the world's attention on the irrationality of violent conflicts, decisions, and actions. They thus initiate and facilitate wide public dialogues aimed at nonviolently altering long-standing societal agreements directly related to, and held in place by, the various irrational, violent, habitual, and historically fearful thought-processes residing at the core of these conflicts, with the intention of peacefully ending the conflicts themselves.