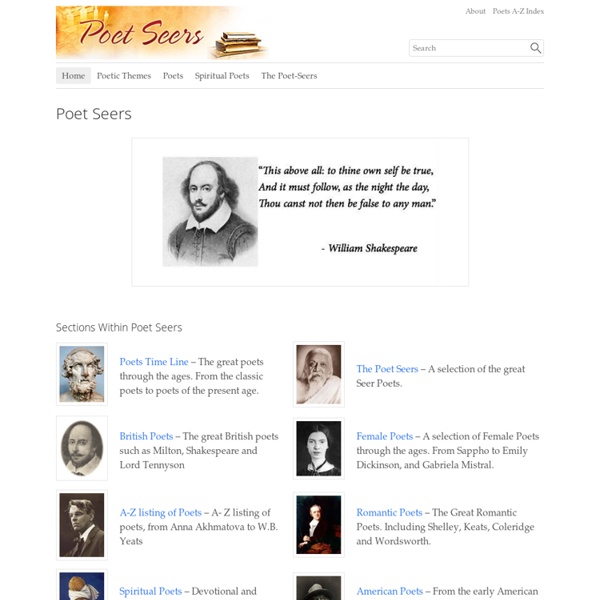 The Gravity Collective Short, sweet and immensely powerful. I instantly fell in love with Lang Leav‘s beautiful, phenomal poetry. She translates the thoughts in your head and feelings in your body to words on a page. It’s a brilliant talent to possess. Like this: Greek and Latin Texts Part of the opening lines of Frontinus's book on the water supply of Rome (13th- or 14th- centurya manuscript: Codex Cassinensis 361) Shakespeare's poems at AbsoluteShakespeare.com William Shakespeare's poems are recognized by many as classics in the genre. From "A Lover's Complaint" to "Venus and Adonis", Shakespeare's poems have been rivaled but rarely surpassed and as such, they have remained popular with poets and readers alike. Text: Craig, W.J., ed. The Complete Works of William Shakespeare. London: Oxford University Press: 1908.

I Write Like Stephen King Become a better writer! Subscribe to our awesome free newsletter to learn how to become a better writer and receive monthly tips on writing. We respect your privacy: email addresses are never sold, and you can unsubscribe at any time. Below are the results of analysis of your text. Analyze new text? CollectiveInquiry “When words run dry…” February 28, 2013 by Kristyn He and I When words run dry, American Teilhard Association / teilhards-quotes “Seeing. One could say that the whole of life lies in seeing — if not ultimately, at least essentially. To be more is to be more united — and this sums up and is the very conclusion of the work to follow. But unity grows, and we will affirm this again, only if it is supported by an increase of consciousness, of vision. That is probably why the history of the living world can be reduced to the elaboration of ever more perfect eyes at the heart of a cosmos where it is always possible to discern more. Are not the perfection of an animal and the supremacy of the thinking being measured by the penetration and power of synthesis of their glance?

Dehumanization and Demonization of the Enemy - dustiespencer -Dustie Marie Spencer, Dec. 2007 "The dehumanization of the enemy or of oneself traduces the truth of the matter: that human life, whether instantiated as a foe, or a comrade, or oneself, possesses value." -Michael W. Borough: 157 "Dehumanization is the psychological process whereby opponents view each other as less than human and thus not deserving of moral consideration." [1] When many people think about atrocities involving the dehumanization of the enemy, they envision horrific images of genocide; the Nazi extermination of European Jews, the Tutsi decimation by the majority Hutus in Rwanda, and the genocidal rape of the Bosnian Muslim women.

My Favorite Poetry: Lang Leav A few months ago, I stumbled on a poem that someone else had reblogged on tumblr. I instantly saved the image because it was something that really struck me. I had never heard of the poet, but assumed that they were fairly famous because of the quality of the words. After seeing poem after poem, and reblogging tons of them, I finally found Lang Leav’s tumblr and hit the jackpot. Every single thing she writes is absolutely flawless.

Works of Humanist Erasmus  Ongoing exhibition, opened April 11, 2008. Throughout his life, Thomas Jefferson (1743–1826) collected books across a vast spectrum of topics and languages. Jefferson followed a modified version of an organizational system created by British philosopher Francis Bacon (1561–1626) to arrange the books in his library, then the largest private book collection in North America.

Throwing Away the Alarm Clock by Charles Bukowski Share my father always said, "early to bed and early to rise makes a man healthy, wealthy and wise." it was lights out at 8 p.m. in our house and we were up at dawn to the smell of