Why Facts Don’t Change Our Minds 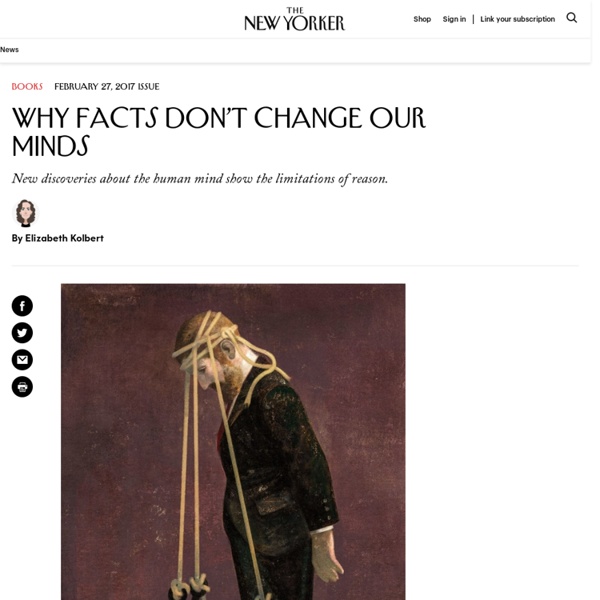 In 1975, researchers at Stanford invited a group of undergraduates to take part in a study about suicide. They were presented with pairs of suicide notes. In each pair, one note had been composed by a random individual, the other by a person who had subsequently taken his own life. The students were then asked to distinguish between the genuine notes and the fake ones. Some students discovered that they had a genius for the task. Out of twenty-five pairs of notes, they correctly identified the real one twenty-four times. As is often the case with psychological studies, the whole setup was a put-on. In the second phase of the study, the deception was revealed. “Once formed,” the researchers observed dryly, “impressions are remarkably perseverant.” A few years later, a new set of Stanford students was recruited for a related study. Even after the evidence “for their beliefs has been totally refuted, people fail to make appropriate revisions in those beliefs,” the researchers noted.

How to Convince Someone When Facts Fail Have you ever noticed that when you present people with facts that are contrary to their deepest held beliefs they always change their minds? Me neither. In fact, people seem to double down on their beliefs in the teeth of overwhelming evidence against them. Life without language Thought without symbols — life without language — it’s a cognitive reality that is virtually impossible for most modern humans to fathom. For the vast majority of us, our thought processes have been profoundly shaped by the introjection of language into our cognitive worlds, the taking on board of a massive intellectual prosthesis, the collective product of countless generations. Human thought, for the majority, is not simply the individual outcome of our evolved neural architecture, but also the result of our borrowing of the immense symbolic and intellectual resources available in language. What would human thought be like without language?

Every Single Cognitive Bias in One Infographic View the high resolution version of today’s graphic by clicking here. The human brain is capable of incredible things, but it’s also extremely flawed at times. Science has shown that we tend to make all sorts of mental mistakes, called “cognitive biases”, that can affect both our thinking and actions. These biases can lead to us extrapolating information from the wrong sources, seeking to confirm existing beliefs, or failing to remember events the way they actually happened! To be sure, this is all part of being human – but such cognitive biases can also have a profound effect on our endeavors, investments, and life in general.

What are the stages of Meditative Concentration? "...you should know that all mundane and supermundane virtuous qualities, whether of shravakas, bodhisattvas, or tathagatas, are the result of meditative serenity and insight." —Samadhi-nirmocana-sutra "An undistracted mind is mental one-pointedness, the serenity aspect, while accurate reflection on facts and meanings refers to discerning wisdom, the insight aspect. Thus, you must acheive all good qualities of the two vehicles through both (1) sustained analysis with discerning wisdom and (2) one-pointed focus on the object of meditation.

Here's the single best type of exercise for your brain, according to scientists Want an all-natural way to lift your mood, improve your memory, and protect your brain against age-related cognitive decline? Get moving. A wealth of recent research, including two new studies published this spring, suggests that any type of exercise that raises your heart rate and gets you moving and sweating for a sustained period of time — known as aerobic exercise — has a significant, overwhelmingly beneficial impact on the brain. “Aerobic exercise is the key for your head, just as it is for your heart,” write the authors of a recent article in the Harvard Medical School blog “Mind and Mood.” While some of the benefits — like a lift in mood — can emerge as soon as a few minutes into a sweaty bike ride, others — like improved memory — might take several weeks to crop up.

Why Intelligent People Can't find Happiness - The Minds Journal “Happiness in intelligent people is the rarest thing I know.”-Ernest Hemingway The presence of a faithful and loving partner, a great family life and a successful career may not be enough to prevent an intelligent soul to feel grief and melancholy. Here are six most likely reasons why happiness seems to elude highly intelligent people: They are the victim of over analysis Many people with high level of intelligence lean towards over-thinking and keep analyzing everything that occurs in their life, their surroundings and beyond.

15 styles of Distorted Thinking 15 styles of Distorted Thinking Filtering: You take the negative details and magnify them while filtering out all positive aspects of a situation. Polarized Thinking: Things are black or white, good or bad. You have to be perfect or you're a failure. The Baader-Meinhof Phenomenon You may have heard about Baader-Meinhof Phenomenon before. In fact, you probably learned about it for the first time very recently. If not, then you just might hear about it again very soon. Baader-Meinhof is the phenomenon where one happens upon some obscure piece of information—often an unfamiliar word or name—and soon afterwards encounters the same subject again, often repeatedly.