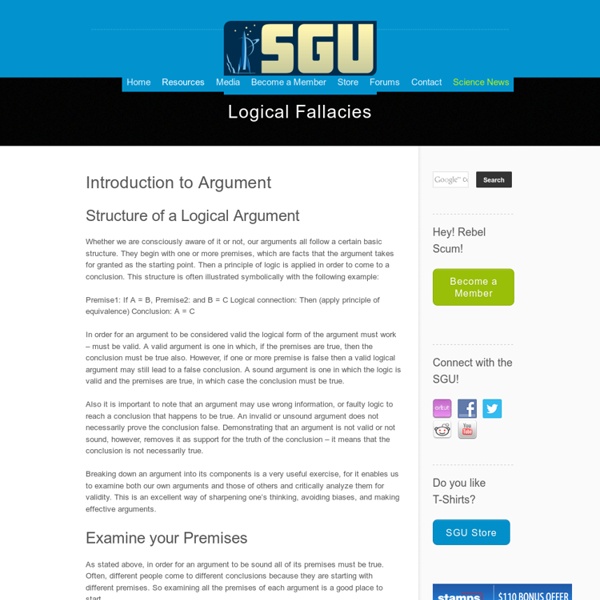 Introduction to Argument Structure of a Logical Argument Whether we are consciously aware of it or not, our arguments all follow a certain basic structure. They begin with one or more premises, which are facts that the argument takes for granted as the starting point. Then a principle of logic is applied in order to come to a conclusion. This structure is often illustrated symbolically with the following example: Premise1: If A = B, Premise2: and B = C Logical connection: Then (apply principle of equivalence) Conclusion: A = C In order for an argument to be considered valid the logical form of the argument must work – must be valid. Also it is important to note that an argument may use wrong information, or faulty logic to reach a conclusion that happens to be true. Breaking down an argument into its components is a very useful exercise, for it enables us to examine both our own arguments and those of others and critically analyze them for validity. Examine your Premises Ad hominem Straw Man

How are assumptions important in the critical thinking process? Critical thinking requires using logic, but logic is dependent upon accepting premises. These premises are often called assumptions. Some premises are ironclad, such as assuming that an object dropped on Earth will fall and land safe. Others are unknown. Ensuring that assumptions are correct is essential for creating a well-formed argument. Ynetnews Opinion - No ‘Azaria effect’ in East Talpiot attack It was clear that someone would rush to link Elor Azaria’s verdict to the cadets’ response to the vehicular attack that took place in Jerusalem on Sunday. This is an artificial attempt to provoke the army from the wrong angle. Sunday’s incident exposed a professional failure that has nothing to do with Azaria’s faulty conduct. Follow Ynetnews on Facebook and Twitter

28 pieces of computing advice that stand the test of time Technology never stops moving foward. Hardware gets faster, and operating systems gain new features and (we hope) finesse. This is natural computing law. But just because computers are one big exercise in evolutionary progress, that doesn't mean certain computing maxims ever go out of style. Take, for example, the nuggets of wisdom in the following list. All of these things are as true today as they were 2, 5, and in some cases even 10 or 20 years ago.

The Peace Revolution Podcast Project Constellation: Connect the Dots, See the Big Picture. A Message to the Future of America by Richard Grove; published by Meria Heller (www.Meria.net) on the Meria Heller Show, May 31, 2006. Wall Street Whistleblower Richard Grove's first publication- a message to media hosts and their audiences- to inspire them to look beyond the veil of illusion and inspect the actual facts regarding some of the biggest myths of our time. To play, click the "pod" icon at the top left, or right-click and "save as" to download.

Great Philosophers: Hypatia Aristotle: Laws of Thought Philosophy as laws of thought Aristotle was the first person to investigate the patterns and processing of reason. He discovered (some would say invented) logic. The Dangerous World of Logical Fallacies Thinkers in disciplines ranging from mathematics to economics, and from science to philosophy, attempt to construct theorems, theories, or scenarios, that have at least a fighting chance of being correct. Since in many cases one of the chief guides is logical reasoning, the ability to spot fallacies is an essential skill. In this piece I will briefly discuss a few such potential traps, and I hope to describe a few more in a future blog entry.

A List Of Fallacious Arguments attacking the person instead of attacking his argument. For example, "Von Daniken's books about ancient astronauts are worthless because he is a convicted forger and embezzler." (Which is true, but that's not why they're worthless.) Another example is this syllogism, which alludes to Alan Turing's homosexuality: Turing thinks machines think. Turing lies with men.

Uses and Misuses of Logic. Introduction This document contains observations on the uses and misuses of logic, particularly in the sciences. Along the way we'll wander into the murky realms of absolute and proximate truths, deduction and induction and address the question of how we can have confidence in knowledge that is less than perfect. We will use certain terms as scientists use them. Want to 'train your brain'? Forget apps, learn a musical instrument The multimillion dollar brain training industry is under attack. In October 2014, a group of over 100 eminent neuroscientists and psychologists wrote an open letter warning that “claims promoting brain games are frequently exaggerated and at times misleading”. Earlier this year, industry giant Lumosity was fined $2m, and ordered to refund thousands of customers who were duped by false claims that the company’s products improve general mental abilities and slow the progression of age-related decline in mental abilities. And a recent review examining studies purporting to show the benefits of such products found “little evidence ... that training improves improves everyday cognitive performance”. While brain training games and apps may not live up to their hype, it is well established that certain other activities and lifestyle choices can have neurological benefits that promote overall brain health and may help to keep the mind sharp as we get older. One of these is musical training.