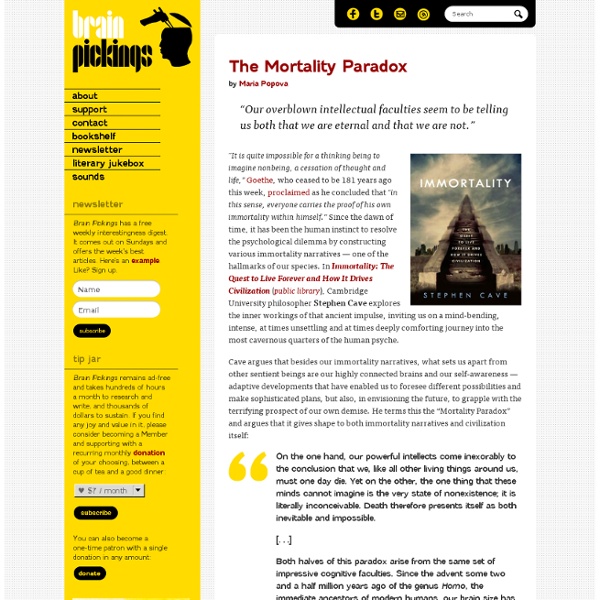 by Maria Popova “Our overblown intellectual faculties seem to be telling us both that we are eternal and that we are not.” “It is quite impossible for a thinking being to imagine nonbeing, a cessation of thought and life,” Goethe, who ceased to be 181 years ago this week, proclaimed as he concluded that “in this sense, everyone carries the proof of his own immortality within himself.” Cave argues that besides our immortality narratives, what sets us apart from other sentient beings are our highly connected brains and our self-awareness — adaptive developments that have enabled us to foresee different possibilities and make sophisticated plans, but also, in envisioning the future, to grapple with the terrifying prospect of our own demise. On the one hand, our powerful intellects come inexorably to the conclusion that we, like all other living things around us, must one day die. But while the survival benefits of these faculties are indisputable, Cave argues, they come at a cost: Related:  Philosophy and Logic • Philosophy/ Psychology • My Mental Studies

CriticalThinking.org - Critical Thinking Model 1 To Analyze Thinking We Must Identify and Question its Elemental Structures Standard: Clarityunderstandable, the meaning can be grasped Could you elaborate further? Could you give me an example? Could you illustrate what you mean? Standard: Accuracyfree from errors or distortions, true How could we check on that? Standard: Precisionexact to the necessary level of detail Could you be more specific? Standard: Relevancerelating to the matter at hand How does that relate to the problem? Standard: Depthcontaining complexities and multiple interrelationships What factors make this a difficult problem? Standard: Breadthencompassing multiple viewpoints Do we need to look at this from another perspective? Standard: Logicthe parts make sense together, no contradictions Does all this make sense together? Standard: Significancefocusing on the important, not trivial Is this the most important problem to consider? Standard: FairnessJustifiable, not self-serving or one-sided Think About... State the Question

Hume and Kant The 1700s saw many great thinkers who have left a lasting impact on modern philosophy and science -- and psychology. But there were two who would, between them, define the nature of science, especially psychology. They are, of course, David Hume and Immanuel Kant. David Hume was born April 26, 1711 in Edinburgh, Scotland. His father died the following year and left the estate to his eldest son, John. His family suggested he try law, and he tried, but found that it -- as he put it -- made him sick. Hume was the ultimate skeptic, convincingly reducing matter, mind, religion, and science to a matter of sense impressions and memories. I will let him speak for himself. All ideas are copies of impressions...it is impossible for us to think of anything which we have not antecedently felt by our senses.... And so...no matter! There are some philosophers (e.g. And no mind! There is no idea in metaphysics more obscure or uncertain than necessary connection between cause and effect. 1.

How to Give a Killer Presentation A little more than a year ago, on a trip to Nairobi, Kenya, some colleagues and I met a 12-year-old Masai boy named Richard Turere, who told us a fascinating story. His family raises livestock on the edge of a vast national park, and one of the biggest challenges is protecting the animals from lions—especially at night. Richard had noticed that placing lamps in a field didn’t deter lion attacks, but when he walked the field with a torch, the lions stayed away. From a young age, he’d been interested in electronics, teaching himself by, for example, taking apart his parents’ radio. The story was inspiring and worthy of the broader audience that our TED conference could offer, but on the surface, Richard seemed an unlikely candidate to give a TED Talk. But Richard’s story was so compelling that we invited him to speak. On the basis of this experience, I’m convinced that giving a good talk is highly coachable. Frame Your Story

16PF Questionnaire The Sixteen Personality Factor Questionnaire (16PF), is a self-report personality test developed over several decades of empirical research by Raymond B. Cattell, Maurice Tatsuoka and Herbert Eber. The 16PF provides a measure of normal personality and can also used be used by psychologists, and other mental health professionals, as a clinical instrument to help diagnose psychiatric disorders, as well as help with prognosis and therapy planning. The 16PF instrument provides clinicians with a normal-range measurement of anxiety, adjustment, emotional stability and behavioral problems.[1][2] It can also be used within other areas of psychology, such as career and occupational selection.[3] Outline of Questionnaire[edit] The goal of the fifth edition revision in 1993 was to The 16PF Fifth Edition contains 185 multiple-choice items which are written at a fifth-grade reading level. Item Format[edit] When I find myself in a boring situation, I usually "tune out" and daydream about other things.

A Visual Dictionary of Philosophy: Major Schools of Thought in Minimalist Geo... by Maria Popova A charming exercise in metaphorical thinking and symbolic representation. Rodin believed that his art was about removing the stone not part of the sculpture to reveal the essence of his artistic vision. Perhaps this is what Catalan-born, London-based graphic designer Genis Carreras implicitly intended in chiseling away the proverbial philosopher’s stone to sculpt its minimalist essence. Skepticism True knowledge or certainty in a particular area is impossible. The skeptics (in the colloquial sense of the word, although its roots are, fittingly, philosophical) should remember that rather than an exercise in reckless reductionism seeking to dumb down some of humanity’s most complex ideas, the project is instead a playful and thoughtful celebration of symbolic and metaphorical thinking — that distinctly human faculty that is the hallmark of our imagination. Carreras writes: Relativism Absolutism An absolute truth is always correct under any condition. Stoicism Positivism Humanism

Albert Bandura Albert Bandura (born December 4, 1925) is a psychologist who is the David Starr Jordan Professor Emeritus of Social Science in Psychology at Stanford University. For almost six decades, he has been responsible for contributions to many fields of psychology, including social cognitive theory, therapy and personality psychology, and was also influential in the transition between behaviorism and cognitive psychology. He is known as the originator of social learning theory and the theoretical construct of self-efficacy, and is also responsible for the influential 1961 Bobo doll experiment. A 2002 survey ranked Bandura as the fourth most-frequently cited psychologist of all time, behind B. In 1974 Bandura was elected to be the Eighty-Second President of the American Psychological Association (APA). Personal life[edit] Bandura was born in Mundare, in Alberta, a small town of roughly four hundred inhabitants, as the youngest child, and only son, in a family of six. Post-doctoral work[edit]

God is Imaginary - 50 simple proofs Proof #7 - Understanding religious delusion Let's imagine that I tell you the following story: There is a man who lives at the North Pole. He lives there with his wife and a bunch of elves. During the year, he and the elves build toys. Then, on Christmas Eve, he loads up a sack with all the toys. But let's say that I am an adult, and I am your friend, and I reveal to you that I believe that this story is true. What would you think of me? Why do you think that I am delusional? Since you are my friend, you might try to help me realize that my belief in Santa is a delusion. "But how can the sleigh carry enough toys for everyone in the world?" Why didn't my answers satisfy you? Now let me show you another example... Another Example Imagine that I tell you the following story: I was in my room one night. You would ask some obvious questions. Most people would assume that I am delusional if I told them this story. Another example Imagine that I tell you this story: But you need to be careful.

Minnesota Multiphasic Personality Inventory The Minnesota Multiphasic Personality Inventory (MMPI) is the most widely used and researched standardized psychometric test of adult personality and psychopathology.[1] Psychologists and other mental health professionals use various versions of the MMPI to develop treatment plans; assist with differential diagnosis; help answer legal questions (forensic psychology); screen job candidates during the personnel selection process; or as part of a therapeutic assessment procedure.[2] The original MMPI, first published by the University of Minnesota Press in 1943, was replaced by an updated version, the MMPI-2, in 1989. A version for adolescents, the MMPI-A, was published in 1992. An alternative version of the test, the MMPI-2 Restructured Form (MMPI-2-RF), published in 2008, retains some aspects of the traditional MMPI assessment strategy, but adopts a different theoretical approach to personality test development. History[edit] The original authors of the MMPI were Starke R. MMPI[edit]