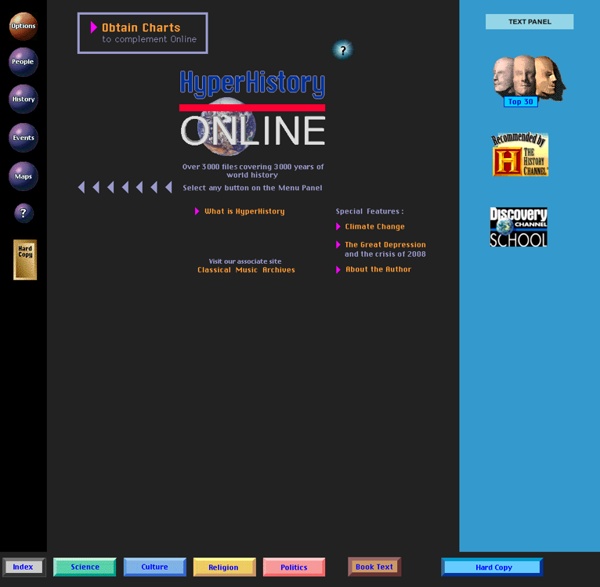 Timeline of country and capital changes This is a timeline of country and capital changes around the world. It includes dates of declarations of independence, changes in country name, changes of capital city or name, and significant changes in territory (viz. land annexation, cession or secession). 2000s 1900s 1800s 1700s 1600s 1500s 1400s 1300s 1200s 1100s 1000s 1st Millennium CE 1st Millennium BCE 2nd Millennium BCE 3rd Millennium BCE 4th Millennium BCE §Common Era[edit] §2010s[edit] §2000s[edit] ChronoZoom ChronoZoom is an educational tool for teachers and students who want to put historical events in perspective. A great many resources have been created already in ChronoZoom for your enjoyment and enlightenment. Start Exploring Use ChronoZoom to get a perspective of the extensive scale of time and historical events relative to what happened around the world. Become an author yourself! Simply log on with your social networking credentials to record your unique perspective or tell a story that needs to be told.

To Tug the Heartstrings, Music Must First Tickle the Brain “The song has that triplet going on underneath that pushes it along, and at a certain point I wanted it to stop because the story suddenly turns very serious,” Mr. Simon said in an interview. “The stopping of sounds and rhythms,” he added, “it’s really important, because, you know, how can I miss you unless you’re gone? Supreme Court Landmarks Bethel School District #43 v. Fraser (1987) Holding: Students do not have a First Amendment right to make obscene speeches in school. Matthew N. Fraser, a student at Bethel High School, was suspended for three days for delivering an obscene and provocative speech to the student body. In this speech, he nominated his fellow classmate for an elected school office. The Supreme Court held that his free speech rights were not violated.

Periodis Web - Maps to be Used for the History of Europe Euratlas Periodis Web shows the history of Europe through a sequence of 21 historical maps, every map depicting the political situation at the end of each century. Here, on the left, are 21 mini-maps giving access to 21 full maps and to 84 quarters of maps with more detailed views of the states, provinces and main cities.Moreover, each map offers a historical gazetteer. Thus you can highlight in red each sovereign state and in green each dependent entity. See the Map Legend for more details. Navigation through the atlas is easy: on the left side of the pages, you simply need to choose a century for temporal navigation. French and German versions of this historical atlas are also provided and you can view them by clicking on the small flags at the top of the pages.

National Cold War Exhibition January 11 Jan - A ceasefire was announced in Greece between government forces and ELAS guerrillas; this agreement was confirmed by the government on 12 February. 4 Feb - Yalta Conference where Roosevelt, Churchill and Stalin meet to discuss terms of German surrender and the boundaries and governments in post war Eastern Europe. 12 Apr - President F D Roosevelt dies and is succeeded by Harry S Truman. 7 May - The agreement for total and unconditional surrender of the Germans forces was signed at the HQ of the Supreme Commander Allied Expeditionary Force.

Why open data & the arts are natural partners #openarts - Edinburgh Festivals Innovation Lab In the run up to Culture Hackday, this is the latest post in our series on open data & the arts. Following on from Ben’s excellent introduction to what open data actually is (and isn’t), here we will start to articulate a vision for where this all might go. Clay Shirky, the renowned commentator on all things digital, has two phrases that I really like. The first is that technology doesn’t become socially useful until it becomes boring. This is patently true – while a particular technology is the latest shiny thing it will only remain the domain of early adopters and lack the ability to truly scale and create widespread impact and change. Home telephones were a priveleged toy when only 1% of the people you knew had one but an essential utility when 99% did.

Our Documents - 100 Milestone Documents The following is a list of 100 milestone documents, compiled by the National Archives and Records Administration, and drawn primarily from its nationwide holdings. The documents chronicle United States history from 1776 to 1965. Complete List of Documents Please note that you can always use the thumbnail images at the top of every page to navigate directly to any of the 100 Milestone Documents. home History Map Archive Browse the Map Archive The art and history of cartography, aka mapmaking, goes back to ancient times. Or at least what they thought it could look like. Microsoft Research: Interactive HIV/AIDS Exhibits For the past 25 years, family and friends of those who have passed away from AIDS have contributed a 6’-by-3’ panel to the AIDS Memorial Quilt. It is the largest community art project in the world. To date, more than 48,000 panels and 94,000 names make up The Quilt. Its size is now over 1.3 million square feet, making it too large to display all the panels in one place.

Animation: Human Population Growth Over All of History Imagine that for every million people on Earth, there was a single dot on a map. In total, that would be about 7,600 dots – representing today’s global population of 7.6 billion. But, what if we went back in time, and watched those dots accumulate over human history? When and where do the first dots appear, and when does population growth ramp up to get to the billions of people that are alive today? The History of Population Growth Today’s animation comes from the American Museum of Natural History, and it shows over 200,000 years of population growth and the major events along the way.