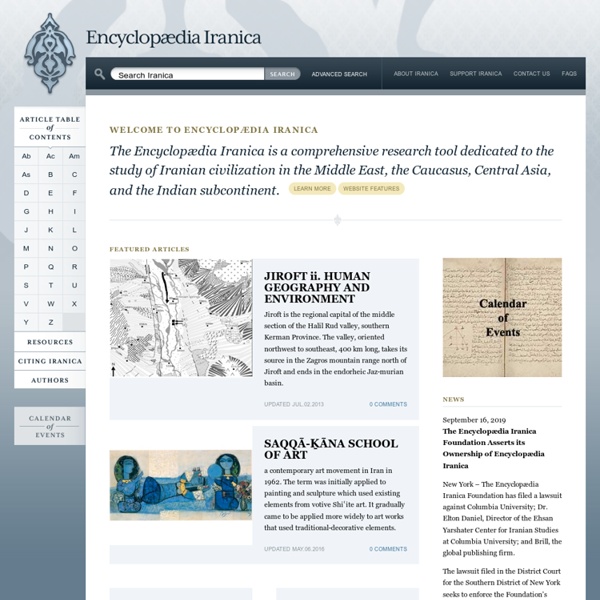 Pleiades - Ancient Places Yuan Dynasty (1271–1368) During the Yuan dynasty, China—for the first time in its long history—was completely subjugated by foreign conquerors and became part of a larger political entity, the vast Mongol empire. Ironically, during this century of alien occupation, Chinese culture not only survived but was reinvigorated. Lacking experience in the administration of a complex empire, the Mongols gradually adopted Chinese political and cultural models. Ruling from their capital in Dadu (also known as Khanbalik; now Beijing), the Mongol Khans increasingly assumed the role of Chinese emperors. In spite of the gradual assimilation of Yuan monarchs, the Mongol conquest imposed a harsh new political reality upon China.

Commons Electronic Resources for Classicists It's been more than 20 years since Electronic Resources first appeared. The web was still in its infancy and the gopher was the state of the art in technology. The first version of this survey was published in the February 1994 issue of the New England Classical Journal. [NECJ XXI.3 (1993-94) 117-21]. One year later the number of web sites and internet resources had grown so much that a revision of the list was necessary. In the summer of 1995 the survey was converted to HTML with links to the various resources and made available online. Maria Pantelia Professor of Classics Thesaurus Linguae Graecae® University of California, Irvine

Ukraine Separatists Rewrite History of 1930s Famine Photo DONETSK, Ukraine — Yevdokiya was still a young girl, her nephew recalled, when the neighbors invited her over for a social occasion of some sort. This was during the great famine of 1933, he said, and her family became alarmed when she failed to return. She never did come home, said the nephew, Aleksandr S. Traditionally, Ukrainian historians have characterized the famine as a genocide, the direct result of Stalin’s forced collectivization and the Soviet government’s requisitioning of grain for export abroad, leaving Ukraine short — and its borders sealed shut. But that is not what students in southeastern Ukraine are learning this year. Even Mr. Ukraine’s 20th-century history is steeped in blood. Natalia S. “History doesn’t change,” Ms. At School No. 14 in Donetsk where she teaches, students are being taught jarringly different lessons about some of their country’s darkest and most contentious periods in the 20th century. And history is hardly academic these days in Donetsk. Mr.

The Chronicle of the Fall of the Roman Empire History and Current Issues for the Classroom | Brown University Wolfram|Alpha: Computational Knowledge Engine Visual Arts Encyclopedia Like Modern Civilization? Thank War If history always felt a little made up and you wished there were more sharply-defined quantitative predictions that could be tested empirically, you are in luck. A new mathematical method has done just that. An trans-disciplinary team tackled a way to mathematically determine how human societies evolve from small groups to the huge, anonymous and complex societies of today. They determined that intense warfare is the evolutionary driver of large complex societies. Simulated within a realistic landscape of the Afro-Eurasian landmass during 1,500 BC to 1,500 AD, their mathematical model was tested against the historical record. These are Mongol horsemen. The study focuses on the interaction of ecology and geography as well as the spread of military innovations and predicts that selection for ultra-social institutions that allow for cooperation in huge groups of genetically unrelated individuals and large-scale complex states, is greater where warfare is more intense.

The Catholic Encyclopedia Please help support the mission of New Advent and get the full contents of this website as an instant download. Includes the Catholic Encyclopedia, Church Fathers, Summa, Bible and more — all for only $19.99... Click here to jump straight to the articles: Original Preface. No one who is interested in human history, past and present, can ignore the Catholic Church, either as an institution which has been the central figure in the civilized world for nearly two thousand years, decisively affecting its destinies, religious, literary, scientific, social and political, or as an existing power whose influence and activity extend to every part of the globe. Designed to present its readers with the full body of Catholic teaching, the Encyclopedia contains not only precise statements of what the Church has defined, but also an impartial record of different views of acknowledged authority on all disputed questions.

The Encyclopedia Iranica is dedicated to the study of Iranian civilization in the Middle East, the Caucasus, Central Asia and the Indian Subcontinent. by nda_librarian Apr 28