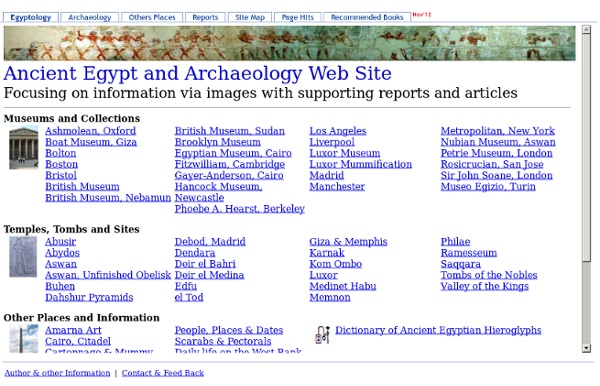 Ancient Egyptian scripts (hieroglyphs, hieratic and demotic) Origins of Egyptian Hieroglyphs The ancient Egyptians believed that writing was invented by the god Thoth and called their hieroglyphic script "mdju netjer" ("words of the gods"). The word hieroglyph comes from the Greek hieros (sacred) plus glypho (inscriptions) and was first used by Clement of Alexandria. The earliest known examples of writing in Egypt have been dated to 3,400 BC. The latest dated inscription in hieroglyphs was made on the gate post of a temple at Philae in 396 AD.

Akhenaten's World nd the lands of Syria and Kush and Egypt, thou appointest every man to his place... All the distant foreign lands also, thou createst their life. This passage from Akhenaten's "Hymn to the Aten" expresses a universalistic sentiment nearly as revolutionary in Egyptian thought as Atenism itself. The heretic pharaoh's sole god was credited with creating and maintaining all life--plant, animal, and human--abroad as well as within the borders of the Two Lands. Yet once established in his new city, Akhetaten, "the Horizon of the Aten", Akhenaten seemed to turn his back on the rest of the world that his god had created. During his seventeen-year reign, known today as the Amarna period, he neglected foreign affairs and did little to arrest the crumbling of the mighty empire of his ancestors.

WikiCommons Internationalization العربية: لقديمة Deutsch: Altes Ägypten English: Ancient Egypt Español: Antiguo Egipto Français : Égypte ancienne Ancient Egypt Military Egypt’s defensive advantages were not enough to stop the conquering Hyskos, who invaded at the end of the Middle Kingdom. The Egyptians learned from their defeat and reinvented their army, ushering in a new age of military glory. The Egyptian lands of the Archaic Period, Old Kingdom and Middle Kingdom were not devoid of armies or enemies, however. Marcus Aurelius Roman Emperor and philosopher Marcus Aurelius ( or ;[1] Latin: Marcus Aurelius Antoninus Augustus; 26 April 121 – 17 March 180) was a Roman emperor from 161 to 180 and a Stoic philosopher. He was the last of the rulers known as the Five Good Emperors (a term coined some centuries later by Niccolò Machiavelli), and the last emperor of the Pax Romana, an age of relative peace and stability for the Roman Empire.

Antique Prints of Egypt Beautiful Aquatints of Egypt Luigi Mayer, an Italian painter, created, among other travel descriptions, a wonderful series of drawings of pre-Napoleonic Egypt, commissioned by the British Ambassador to Constantinople (Istanbul), Robert Ainslie, at the turn to the 19th century. Mayer's drawings were supremely implemented as aquatint engravings by Thomas Milton and very handsomely hand colored. The various plates were dated between 1801 and 1803. Ancient Egyptian Religion Religion guided every aspect of Egyptian life. Egyptian religion was based on polytheism, or the worship of many deities, except for during the reign of Akenaton. The Egyptians had as many as 2000 gods and goddesses. Some, such as Amun, were worshipped throughout the whole country, while others had only a local following.

free archive The Royal Society continues to support scientific discovery by allowing free access to more than 250 years of leading research. From October 2011, our world-famous journal archive - comprising more than 69,000 articles - will be opened up and all articles more than 70 years old will be made permanently free to access. The Royal Society is the world's oldest scientific publisher and, as such, our archive is the most comprehensive in science. Breasted's 1919-1920 Expedition to the Near East Visit Us | Contact Us | Membership | Make a Gift | Calendar | Order Online | What's New The Oriental Institute of the University of Chicago Featured Event:

Egypt's Golden Empire . New Kingdom . Religion With many local and national gods, Egyptian religion was a natural response to the mysteries of the universe and reflected the worries of everyday life in the Ancient World. Over the last thousand years, scientific discoveries have helped explain the natural world. We know about our bodies, conception and childbirth, and how diseases spread. Ancient History Encyclopedia Egypt is a country in North Africa, on the Mediterranean Sea, and is among the oldest civilizations on earth. The name 'Egypt' comes from the Greek Aegyptos which was the Greek pronunciation of the Egyptian name 'Hwt-Ka-Ptah' (which means "House of the Spirit of Ptah", who was a very early od of the Ancient Egyptians). In the early Old Kingdom, Egypt was simply known as 'Kemet' which means 'Black Land' so named for the rich, dark soil along the Nile River where the first settlements began. Later, the country was known simply as Misr which means 'country', a name still in use by Egyptians for their nation in the present day. Egypt thrived for thousands of years (from c. 8,000 BCE to c. 525 BCE) as an independent nation whose culture was famous for great cultural advances in every area of human knowledge, from the arts to science to technology and religion. Evidence of overgrazing of cattle, on the land which is now the Sahara Desert, has been dated to about 8,000 BCE.

Ancient Egypt: Art Fragment of a Painted Floor Plaster, pigment New Kingdom, reign of Akhenaten, ca. 1352-1336 B.C. Tell el-Amarna Gift of the Egypt Exploration Society, 1922 OIM 120 At Tell el-Amarna, the capital city of the Pharaoh Akhenaten and his wife Nefertiti, the floors of many buildings were brightly painted with naturalistic scenes. Atypical of what we perceive ancient Egyptian art to be, this unusual floor fragment is decorated with cornflowers that appear to sway in the breeze. This emphasis upon nature and movement is a hallmark of the art of Akhenaten's reign. Art was used as a form of communication for those who could not read.