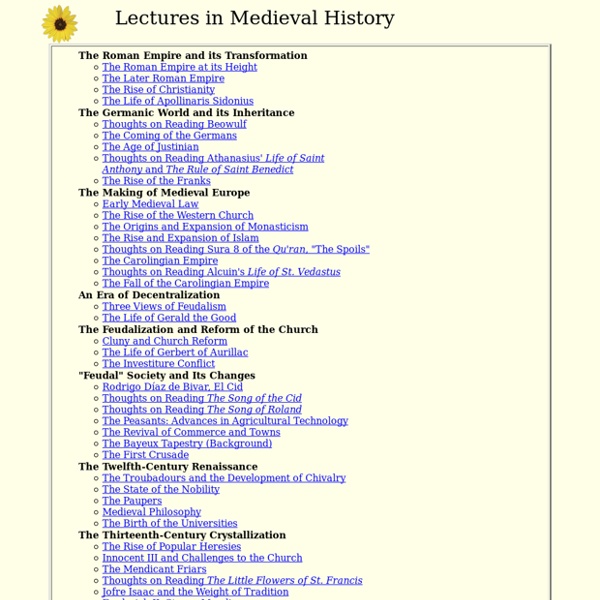 Please take into consideration the purpose and audience for which the lecture notes listed above were written. For a good many years, I taught a three-credit-hour freshman survey entitled Introduction to Medieval History to enrollments of room-size - generally three hundred students. During those years, the University of Kansas maintained an open enrollment policy in which all graduates from accredited Kansas high schools were admitted to the University. Since the only history courses required by the State of Kansas at the secondary level were in American History, students enrolling for this course varied widely in their knowledge of the European past. Consequently, my lectures were both basic and episodic, concentrating on major events and topics that would prepare the students for further enrollments in Humanities courses and attempting to demonstrate that the study of History could be both useful and enjoyable.

How Things Used to Be You are visiting www.rawfoodinfo.com How Things Used To Be Hi friends, I don't know who wrote this article and some of it may not be accurate but it is still interesting musing... Canadian Journal of Sociology The Canadian Journal of Sociology publishes rigorously peer-reviewed research articles and innovative theoretical essays by social scientists from around the world, providing insight into the issues facing Canadian society as well as social and cultural systems in other countries. The journal also features a lively debate/commentary section encouraging the intensive exchange of ideas, along with regular sections such as “Notes on Society” that address topical issues of the day from a social science point of view and “Notes on the Discipline” designed to discuss a variety of issues encountered in the course of the sociological analysis of modern society. Each issue of the journal also has a comprehensive book review section. Announcements Vol 39, No 1 (2014)

Internet History Sourcebooks Internet Ancient History Sourcebook The Internet Ancient History Sourcebook has expanded greatly since its creation, and now contains hundred of local files as well as links to source texts throughout the net. See Introduction for an explanation of the Sourcebook's goals. See the Help! page for all the help on research I can offer. History of Astronomy - Indian and Arabic Astronomy - StumbleUpon Aryabhatta In India, Aryabhatta, writes a book in which he states that the Sun is the centre of the Solar System. This idea would not be accepted for another 1000 years. Manual of Style (linking) Linking through hyperlinks is an important feature of Wikipedia. Internal links are used to bind the project together into an interconnected whole. Interwiki links bind the project to sister projects such as Wikisource, Wiktionary, and Wikipedia in other languages; and external links bind Wikipedia to the World Wide Web. Appropriate links provide instant pathways to locations within and outside the project that are likely to increase readers' understanding of the topic at hand.

Project Avalon - Klaus Dona: The Hidden History of the Human Race - StumbleUpon Click here for the PDF version of this interview (20 pages) Click here for the video presentation March 2010 **Ed note: Some transcripts contain words or phrases that are inaudible or difficult to hear and are, therefore, designated in square brackets.** BILL RYAN (BR): This is Bill Ryan here from Project Camelot and Project Avalon.

Manual of Style The Manual of Style (often abbreviated MoS or MOS) is a style guide for all Wikipedia articles. This is its main page, covering certain topics (such as punctuation) in full, and presenting the key points of others. Subpages, linked via this page's menu and listed at Wikipedia:Manual of Style/Contents, provide detailed guidance on some topics. The Manual of Style documents Wikipedia's house style. It helps editors write articles with consistent, clear, and precise language, layout, and formatting. The goal is to make using Wikipedia easier and more intuitive.

‘The Bad-Ass Librarians of Timbuktu,’ by Joshua Hammer Photo THE BAD-ASS LIBRARIANS OF TIMBUKTUAnd Their Race to Save the World’s Most Precious ManuscriptsBy Joshua Hammer278 pp. Simon & Schuster. $26. In the summer of 1826, a Scotsman named Alexander Gordon Laing became the first European to set foot in Timbuktu, a city that would become synonymous with mysterious remoteness. The inhabitants of Timbuktu would have been amused by the British imperialist assumption that their city had been “discovered.”

Mercantilism in Spain The seeming prosperity and glittering power of Spain in the 16th century proved a sham and an illusion in the long run. For it was fuelled almost completely by the influx of silver and gold from the Spanish colonies in the New World. In the short run, the influx of bullion provided a means by which the Spanish could purchase and enjoy the products of the rest of Europe and Asia; but in the long run, price inflation wiped out this temporary advantage. The result was that when the influx of specie dried up, in the 17th century, little or nothing remained. Not only that — the bullion prosperity induced people and resources to move to southern Spain, particularly the port of Seville, where the new specie entered Europe. The result was malinvestment in Seville and the south of Spain, offset by the crippling of potential economic growth in the north.

Moorish Spain: A Successful Multicultural Paradise? Part 1 The Myth of the Andalusian Paradise:Muslims, Christians, and Jews under Islamic Rule in Medieval Spainby Dario Fernandez-Morera Wilmington: ISI Books, 2016 Dario Fernandez-Morera, of Cuban extraction, is associate professor of Spanish and Portuguese at Northwestern University. He has previously published American Academia and the Survival of Marxist Ideas (1996), as well as numerous papers on the literature of Spain’s Golden Age. In this new book he tackles one of the anti-European left’s most cherished delusions, viz., that al-Andalus, or Moorish Spain (711–1492 AD), was a successful multicultural society in which Christians, Jews and Muslims flourished together beneath the tolerant eye of enlightened Islamic rulers. These supposed halcyon days of Moorish tolerance are contrasted favorably with both the Visigothic Kingdom that preceded them and the Spain of the inquisition that followed. Advertisement - Time to SUBSCRIBE now!