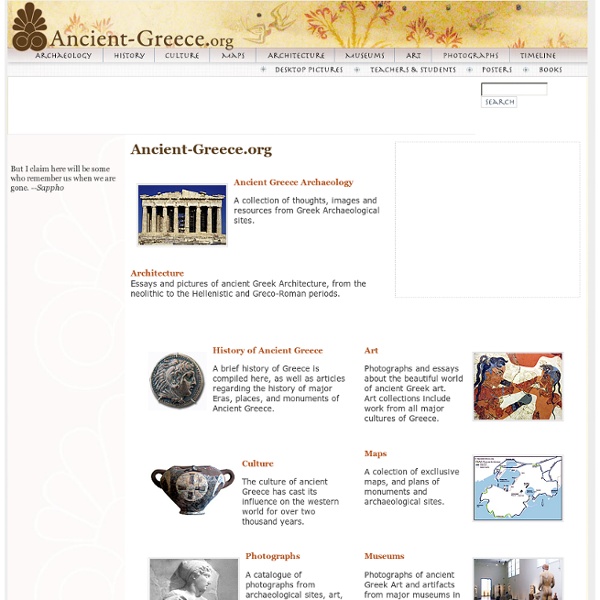 Archaeology A collection of essays, thoughts, images and resources from Greek Archaeological sites. Architecture Essays and pictures of ancient Greek Architecture, from the neolithic to the Hellenistic and Greco-Roman periods. History & Culture A brief history of Greece is compiled here, as well as articles regarding the history of major Eras, places, and monuments of Ancient Greece.

Ancient Egyptian scripts (hieroglyphs, hieratic and demotic) Origins of Egyptian Hieroglyphs The ancient Egyptians believed that writing was invented by the god Thoth and called their hieroglyphic script "mdju netjer" ("words of the gods"). The word hieroglyph comes from the Greek hieros (sacred) plus glypho (inscriptions) and was first used by Clement of Alexandria.

Early Byzantine Art Early Byzantine Art As you know, Rome was the capitol of the Roman Empire until the era of Constantine. In 324, Constantine moved the capital from Rome to the Greek City of Byzantium and renamed it Constantinople. Marcus Aurelius Roman Emperor and philosopher Marcus Aurelius ( or ;[1] Latin: Marcus Aurelius Antoninus Augustus; 26 April 121 – 17 March 180) was a Roman emperor from 161 to 180 and a Stoic philosopher. He was the last of the rulers known as the Five Good Emperors (a term coined some centuries later by Niccolò Machiavelli), and the last emperor of the Pax Romana, an age of relative peace and stability for the Roman Empire. He served as Roman consul in 140, 145, and 161. Unlike some of his predecessors, Marcus chose not to adopt an heir.

The Other Mystery of Easter Island Moai statues Easter Island is branded into popular consciousness as the home of the mysterious and towering moai statues, but these are not the only curiosity the South Pacific island holds. Where the moai are fascinating for their unknown purpose and mysterious craftsmen, the island's lost language of Rongorongo is equally perplexing. The unique written language seems to have appeared suddenly in the 1700s, but within just two centuries it was exiled to obscurity.

free archive The Royal Society continues to support scientific discovery by allowing free access to more than 250 years of leading research. From October 2011, our world-famous journal archive - comprising more than 69,000 articles - will be opened up and all articles more than 70 years old will be made permanently free to access. The Royal Society is the world's oldest scientific publisher and, as such, our archive is the most comprehensive in science. Treasures in the archive include Isaac Newton's first published scientific paper, geological work by a young Charles Darwin, and Benjamin Franklin's celebrated account of his electrical kite experiment. The archive also includes all articles from Philosophical Transactions of the Royal Society, first published in 1665 and officially recognised as the world's first ever peer-reviewed journal.

Resources for Primary Source Documents Primary sources are resources that were first-hand created in a given period of time and never undergone any kind of editing or distortion. These sources are multimodal and they come in different forms. They can be artifacts, documents, pictures, recordings, essays, photographs, maps...etc. Now with the globalization of knowledge and the pervasive use of digital media, primary sources become accessible to everybody with an internet connection. However, the search for these materials is akin to a scavenger hunt and hence the importance of having a handy list such as the one below to keep for rainy days.

Rebuilding Ancient Egyptian Temples in 3D The reconstructions, in this section, give an idea of how these ancient temples might have appeared to ancient eyes. Ancient peoples liked to decorate their buildings and temples with bright colours. Take the Parthenon, in Athens, for example; nowadays we have this vision of those beautiful columns and fabulously carved marbles showing the bare stone, which appeals to our modern aesthetic. However, in ancient times the bare stone was hidden from view because it was all painted in the most brilliant colours. Rebuilding Ancient Egyptian Temples in 3D

Internet History Sourcebooks Project Internet History Sourcebooks Project Paul Halsall, Editor Last Modified: Dec 11 | linked pages may have been updated more recently The Internet History Sourcebooks Project is a collection of public domain and copy-permitted historical texts presented cleanly (without advertising or excessive layout) for educational use. 1. Rome Reborn Mission Rome Reborn is an international initiative whose goal is the creation of 3D digital models illustrating the urban development of ancient Rome from the first settlement in the late Bronze Age (ca. 1000 B.C.) to the depopulation of the city in the early Middle Ages (ca. A.D. 550). With the advice of an international Scientific Advisory Committee, the leaders of the project decided that A.D. 320 was the best moment in time to begin the work of modeling. At that time, Rome had reached the peak of its population, and major Christian churches were just beginning to be built. After this date, few new civic buildings were built.

Histography- A Wonderful Interactive Timeline for History Teachers October , 2015 Histography is an excellent interactive timeline that spans the history of humankind from the Big Bang to 2015. All historical content embedded in this timeline has been drawn from wikipedia and is self-updated on a daily basis. Historical events are represented by dots and placed on a chronological order. Hovering your mouse over any dot will bring up an informational box with more details on the event. Among the things included in the description of each event are : videos (if available), a link to wiki page where you can read more on the event, and a link for related events.

Mycenae Mycenae The Lions GateThe palace of Mycenae is surrounded by a fortification wall. The main entrance of this fortification wall is the “Lions Gate”. Its triangular sculpture depicts two animals, probably lions, flanking a column. This is the first escutcheon in the world.