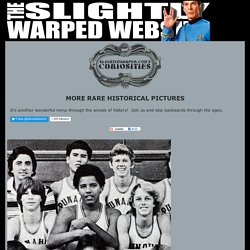 How Chichen Itza appeared in 1862. Queen Elizabeth meets Marilyn Monroe in 1956. New York's Central Park in the 1930's. Muhammad Ali convinces a man not to jump. A member of the KKK holds a noose outside a car window during a parade through a black neighborhood in Miami the night before a primary election in 1939. Stephen Colbert and David Schwimmer in their Northwestern University improv troupe, No Fun Mud Piranhas 1984. Madonna, Sting, and Tupac hanging out. History's Forgotten Images. Bonnie and Clyde's car following the shootout that ended the two outlaws. 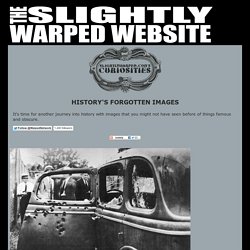 The gunfire barrage was so loud that many members of the posse experienced temporary deafness. Civil War veteran Samuel Decker poses with the prosthetic arms he made for himself... somehow. Inmates at Attica play chess. American soldiers hunker down in a trench less than a mile away from the detonation of a 43 kiloton nuclear bomb in 1953. Mark Twain smokes a cigar in 1905. LAPD police officers going undercover in 1960 to catch purse snatchers. Children in iron lungs before the advent of the polio vaccine in 1937. Cincinnati's cavernous main library, demolished in 1955. The first known sports team photo ever taken, The 1858 Knickerbocker Base Ball Club, Hoboken, New Jersey. Albert Einstein visits The Grand Canyon in 1922. TestColor : Your feelings today and tomorrow. Results. 40 Must-See Photos Capture Poignant Moments In History. 40 important moments from history, captured by photographers of the day and preserved forever. 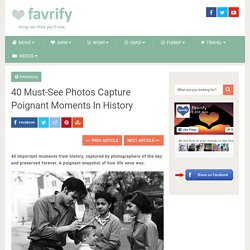 A poignant snapshot of how life once was. 1st class lounge on the Titanic. January 4th 1912. Protesters, Ireland’s ‘Bloody Sunday’. History Now: 20 Incredible History Pictures pt.7. 1) Firemen wearing Vintage Smoke Masks 2) Soviet Soldier with a bust of Hitler in Berlin (1945) 3) A B-17, P-51 and a F4F Wildcat do an ultra low pass. 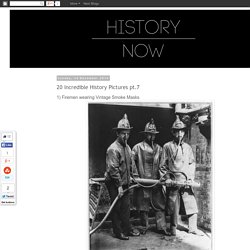 In 1991 the CAF partnered with the Don't Mess With Texas Campaign to create an Anti-Littering Commercial. 23 Rare Photos That Will Tell You Some Of The Most Fascinating Facts In History. Life By rosey | I remember learning history in school a long time ago and it often made me feel bored and sleepy, because it was never fun! 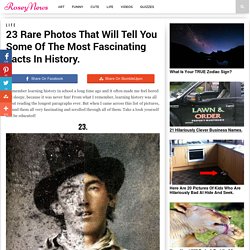 From what I remember, learning history was all about reading the longest paragraphs ever. But when I came across this list of pictures, I found them all very fascinating and scrolled through all of them. Take a look yourself and be educated! H/T to thechive. More Rare Photos from History. Miss America 1924. 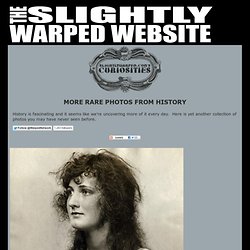 Vikki "The Back" Dougan, 1957. She was the inspiration for the cartoon femme fatale, Jessica Rabbit. Annie Oakley. For the 50th anniversary of the Golden Gate Bridge in 1985, 300,000 people crossed it on foot. The weight caused the bridge to sag by five feet. The blood-stained gloves that Lincoln was wearing when he was assassinated at Ford's Theater. 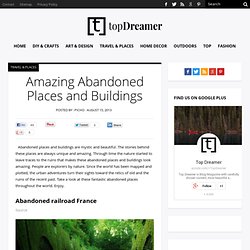 The stories behind these places are always unique and amazing. Through time the nature started to leave traces to the ruins that makes these abandoned places and buildings look amazing. People are explorers by nature. Abandoned railroad France Source Lawndale theater Chicago Source. 28 of history's most fascinating photos. The Statue of Liberty surrounded by scaffolding as workers complete the final stages in Paris. 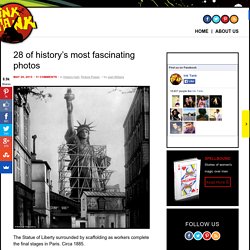 Circa 1885. An Royal Air Force pilot getting a haircut during a break between missions, Britain, 1942 Bob Marley on the beach with Miss World 1976 Cindy Breakspeare, mother of Damien Marley. Ethnomusicologist Frances Densmore recording the music of a Blackfoot chief onto a phonograph, 1916. 40 Must-See Historical Photos. EmailEmail While some photographs capture our attention because of how the artist behind the picture has decided to compose the shot, others are fascinating simply because of the subjects that they depict. 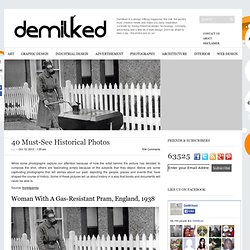 Below are some captivating photographs that tell stories about our past, depicting the people, places and events that have shaped the course of history. Some of these pictures tell us about history in a way that books and documents will never be able to. Source: boredpanda Woman With A Gas-Resistant Pram, England, 1938 Elvis in the Army, 1958 106-year-old Armenian Woman guards home, 1990 Baby cages used to ensure that children get enough sunlight and fresh air when living in an apartment building, ca. 1937 Animals being used as part of medical therapy, 1956 Testing of new bulletproof vests, 1923 Charlie Chaplin at age 27, 1916 Hindenburg Disaster, May 6, 1937 Circus hippo pulling a cart, 1924 Annette Kellerman promotes women’s right to wear a fitted one-piece bathing suit, 1907.