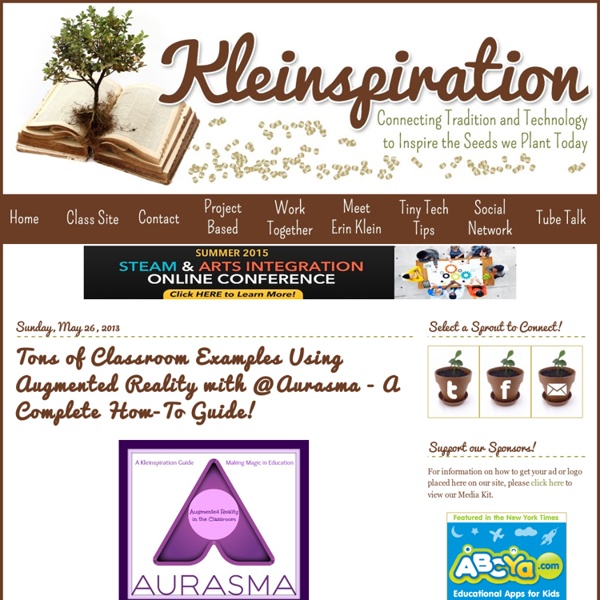 How to Use Augmented Reality in Your Classroomthis post is read best via a desktop due to the embedded video content Augmented reality allows someone to add another layer to an existing image. For example, imagine holding your phone over a poster on the wall as if you were going to take a photo of that poster, and then instantly a video starts playing to offer you additional information about that particular poster. Pretty cool, right? The first time it happens, it seems like magic. After watching the video below, I knew I had to figure this augmented reality thing out. Aurasma is the app I use to create augmented reality. Sharing Aurasma with My Husband's Colleagues Not only is augmented reality amazing, it's also free and easy to do. While waiting for our table to be called for dinner, we were discussing the nice decorations displayed around the reception hall. His colleagues began instantly brainstorming how this could be used for their business. Augmented Reality Vocabulary Step 1:

Bring schools to life with Aurasma app The Magic of Bringing Information to life. I’m assuming you’ve seen at least one of the eight Harry Potter films. In the films, one everyday magical experience is that photos are always moving as if they were video screens, even though they are ‘printed’ on paper. Newspaper photos act out the news event as film too, whilst you walk down the road reading. Daqri's Elements 4D augmented reality app aims to educate the masses Daqri is getting into the Kickstarter game to promote an app aimed at bringing augmented reality into the mainstream. Elements 4D enables an augmented reality experience using six physical blocks engraved with different symbols of the periodic table. Combining the blocks creates various chemical reactions that appear on a tablet or smartphone screen in 3D in the Elements 4D app viewer.

AR Tutorials Apply for a FREE 4D Studio for Education account HERE Sign up for a LIVE 4D Studio Webinar with Us HERE Download the DAQRI application DAQRI 4D Studio Tutorial- How to apply for a FREE 4D Studio for Education account DAQRI 4D Studio Tutorial- 4D Studio Overview and Features What is Layar? – Layar It's not a futuristic dream, it’s here now. Augmented reality (AR) is cutting-edge technology that allows for a digitally enhanced view of the real world, connecting you with more meaningful content in your everyday life. With the camera and sensors in a smartphone or tablet, AR adds layers of digital information – videos, photos, sounds – directly on top of items in the world around us. Ready to see what Layar can do for your business?

Getting Emotional With… Hartmut Esslinger Professor Hartmut Esslinger is founder and co-CEO of frog design inc. He studied Industrial Design at the College of DesignGermany and received a Doctor honoris causa in Fine Arts from Parson School of Design in New York. He helped to establish brand-building design excellence with global companies such as Sony, Louis Vuitton, Apple Computer, Lufthansa, Motorola, Microsoft, SAP and Disney. In 2000 Hartmut was chosen as one of forty-five Germans who shaped German Science and Culture in the 20th Century. He is married to Patricia Roller, the other co-CEO of frog design inc. and has four children.

Augmented Reality in Education String Augmented reality is a 3D learning environment which connects real and virtual world. It provides interactive tools for learning, and fosters informal learning. App Synergy: How To Combine AR And QR Sorry if you were expecting Lenny. He’s not here right now. He asked me to do a guest post for App Synergy. Quick Response (QR) codes seem to be everywhere.